Do You Want or Need a Cone Filter? No. 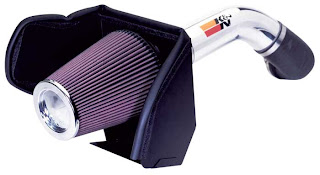 Cone filters and " Cold Air Intake"  (CAI) kits like this may look cool, but do they significantly increase horsepower?  And do they filter well?  Not really, on both counts.  However, they will lighten your wallet by a few hundred dollars.

As I noted in my Automotive Accessories posting, bolting on a lot of crap to your car isn't going to make it go much faster.  Modern cars are pretty much optimized for performance from the factory - as they have to meet emissions and efficiency standards.  The idea that Engineers left horsepower on the table that can be tapped into with a few simple "bolt on" mods is nonsense.

Maybe back in the 1960's and early 1970's, when GM offered 350 and 400 cubic inch engines with paltry two-barrel carburetors, this was possible.  Add a new intake, a four-barrel, and dual exhaust with headers, and perhaps a more aggressive cam, and you could add 100 HP with no problem.

But today?  For many cars, that would be akin to doubling the Horsepower.  And most higher horsepower engines are already resorting to esoteric things like dual turbochargers, variable valve timing and the like.  The specific horsepower per cubic inch is far higher in a stock engine today than it was in many "HiPo" engines of the past.   And adding a turbo or super-charger to stock engine today is scandalously expensive and will likely create more problems than it solves.

In the 1960's, the fabled standard was to generate more than one horsepower per cubic inch.  Today, Designers are routinely generating more than one horsepower per 10 cubic centimeters (about 1.6 HP per cubic inch) - in fairly pedestrian engines.   BMW's twin-turbo 3.0 cranks out 300 HP without having to pay extra for an "M" moniker.  Even "base" engines such as the Mustang 3.7 make 300 HP on 225 cubic inches (and the Camaro V-6 makes similar numbers) while delivering over 30 mpg on the highway.  These are very impressive numbers.  Think there is a lot of headroom to get more than 300 HP out of that engine?  Think again - and think why you need more than 300 HP in the first place.

As I noted in my Horsepower Wars posting, if you want more horsepower, go down to the local car dealer - they are selling it in buckets, right off the lot, no "mods" necessary.

But kids like to "mod" cars, and always have.  So an entire industry sells junk you can bolt onto your car easily, for a few hundred dollars (which can fit on a college student credit card or be paid for with that after-school job) to give kids the idea that they are "hopping up" their car.  Most of this junk just makes the car louder - coffee-can mufflers and cone intake filters being the most popular of the genre.

Do these work?  Not really.  Back when K&N published dynamometer graphs (the data has since been removed from their website) the hard truth was there for anyone to see.  For example, on my 178 HP 2.8 liter BMW engine in one of my 1997 E36's, the cone filter would provide "up to 8.33 HP gain!" according to the advertisements.  But if you look at the real dyno data, you can see that this gain is right at redline, which is where you shouldn't be, most of the time.

For the rest of the graph, there is only a paltry 1-3 HP gain throughout most of the curve.  In other words, not enough to be noticeable, really.

So, even by their own data, there isn't a lot of usable gain to be had from these devices.  So why do kids put them on their cars?  They are loud as all get out, and kids like that.

From a filtering standpoint, they leave something to be desired.  As some sites have noted, the filtering efficiency (ability to remove dirt) may be overstated.  From a practical standpoint, they are a pain in the ass to own, as they have to be periodically removed, cleaned, and then re-oiled.  Cleaning takes overnight, as the filters have to air-dry, and the instructions specifically warn against using hair dryers or air guns to dry them (it blows off the filter cotton).  So you have to take the car out of service for a day to clean and oil them.

And the oil, as you might guess, is available only from K&N, and it is not cheap - more expensive, in most cases, than a standard paper air filter for your car.

Mechanics have told me they hate these things, as they tend to allow dirt in, if not cleaned and oiled properly, and if over-oiled, will allow an oily mass to accumulate in the intake plenum, possibly damaging the throttle position switch or Mass Air Flow sensor.

I would not recommend wasting the hundreds of dollars they want for these things.  If you want a faster car - buy one.  They make a lot of fast, powerful cars these days, and they have substantially more horsepower (300, 400, even 500) than you can get by "bolting on" aftermarket crapola.

Mom's grocery-getter isn't going to be transformed into a race car with a few parts from a catalog.  If you believe that sort of thing, you are falling into the something-for-nothing mentality, and are in for a world of woe (particularly when the credit card bill, with interest, arrives for all this useless, unnecessary junk you bought for your car).

And if you are shopping for a used car and see a cone filter or a coffee-can muffler on it, run away as quickly as possible.  These sort of "mods" do not add to the service life and reliability of a car, and in fact, often detract from it.  Moreover, they speak volumes about the priorities of the owner, and also how they treat their vehicles - as boy-race-cars.  Neither bode well for longevity of the vehicle.

Just say "no" to this sort of junk.  You want a fast car?  Just buy one.   Throwing money at econo-boxes is never a good idea.
Newer Post Older Post Home