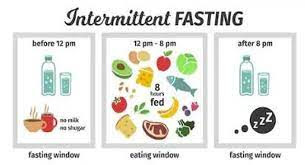 Fad diets come and go - and come again.  Fasting is the lasted gag.

If you want to make a lot of money in America, write a diet book, go on television, promote your "plan" and sell meal packages or herbal pills or whatever.  The plebes will line up along the block, money in hand, begging you to take it.  Failing that, try some idiotic exercise machine like the "abdominizer" or something.  Folks will buy that and then toss it in a closet after a few days.  Americans are idiots.

When I was younger (in my teens) I went on the "Pritikin" diet plan, which was basically lettuce.  It was a low-fat diet, and the idea was to avoid things like salad dressing, as I recall.  I did lose weight, but mostly because I ate less.  The real culprit in my diet back then was beer - at 100 calories a glass, it adds up really quickly, and all it takes is to consume 100 calories a day more than you burn.  Over a month, you add a pound of weight, over a year, ten pounds, over a decade, as much as a hundred, if you let it.  The only real diet is to eat less, consume less, and exercise more.  But that's hard and boring so it doesn't sell.

Mark and I tried the "Adkins" diet which gave me gout - eating all meat really screws up your body.  Yes, you lose weight, but you also gain it all back.  Adkins kicked the bucket and his diet plan faded from view.  But they resurrected it as the "Keto" plan (same shit, different name) and people are all ga-ga about it today.

Many religions such as Islam, preach the idea of fasting as part of a religious practice.  One day a week, or a month, or a year or whatever, you fast for a day, until sundown or something, and it helps you to appreciate God or purges your digestive tract.

What got me started on this was I had what is (hopefully) my last colonoscopy.  They don't recommend them for people over 70, and at age 61, I had my last one, as they are given at ten year intervals.  In preparation for the exam, you have to fast for a day and then take all these diuretics and shit your guts out.  Some fun!  Then they give you Michael Jackson anesthesia and 30 minutes later you wake up and wonder what the fuck happened - time is literally missing from your life.  It is as close to being black-out drunk as I'll ever be.

But it was interesting, fasting.  For one thing, I was not hungry at all.  I went to work on the camper all day, changing a tire and I never felt gnawing hunger.  Granted, I did drink a lot of water and I was allowed to drink fruit juice, so it wasn't total starvation.  But so much of our eating these days is not really because we are hungry, but because we graze or we feel compelled to eat at certain times of the day.

Others are claiming that fasting for a day or two is a way to lose weight and be healthy.  I am not so sure, though, and like anything else, it could backfire.  You go without eating for a day and then binge on bad foods the next, you really aren't solving anything.  Some of these "fasting" diets proscribe "fasting" for 16 hours and eating during the other eight.  The problem with that approach is the same as people who skip breakfast - they end up over-eating during lunch, or scarf down unhealthy sugary snacks from the vending machine at work, at mid-morning.  I am not sure merely time-shifting eating is doing anything.  Eating less is the key.

And there may be some negative effects of fasting, according to some doctors.  If you starve yourself too much, well, you may deplete yourself of vitamins needed for good health.  That short of shit could damage your heart.

But like any raw financial deal, I think the best way to evaluate these things is by how they look from 200 yards away.  It is being promoted as the latest fad?  Is someone selling a book, a seminar, or something else?  Why is this a thing now, and not in the past?  Fad diets are just that - fads.  They come and go, and usually they don't accomplish much.  Anything sold with a lot of hype and glitz and glamor is bound to be a raw deal later on.

It is harder to make better eating habits part of your daily regimen - damn hard.  It is easy to grab a snack or some tidbit and not think about the overall consequences.  Your brain releases dopamine and rewards you for what is ultimately bad behavior.  That is the hard nut to crack, which takes effort and dedication.

The easy way out sounds attractive - with regard to finances and so many other things in life.  It rarely is the right answer, though!