What is Trump Up To? 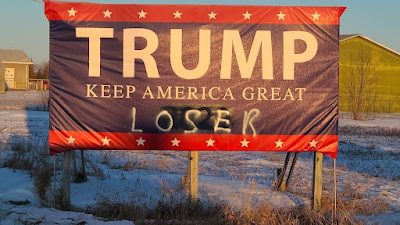 Is Trump having a road-to-Damascus experience, or just plotting something?

Trump recently outed himself as a pro-vaxxer and also as being vaccinated himself.  He also outed Bill O'Reilly as being vaccinated.  He let slip a little tidbit that the anti-vaxxers, Proud Boys, and Qanonsense people didn't realize - the very folks pushing anti-vaxx theories in the media were themselves, vaccinated.  He has even gone so far as to take credit for the vaccine as part of the "Operation Warp Speed" program.  Like any good politician, he is getting out in front of the parade.

Trump was of course, boo'ed, more than once, and the Trump faithful are apoplectic.  It would be like Jesus coming down from heaven and telling his followers that Joel Osteen is a real piece of shit and an agent of Satan himself.  That would actually happen, I think, if Jesus came back.  But it leaves the faithful with two unseemly choices - either they have to renounce Jesus, or renounce Joel Osteen.

Guess which one they will renounce?  Sorry, Jesus!

There are several theories being bandied about as to why Trump has done this.  And maybe some or all of them are true:

1.  It is a trial balloon:  Trump will float ideas, usually on weekends or other times when the media is asleep with other stories.  If the idea has traction with his followers, he will amplify it later.  If not, well, he drops the idea and pretends it didn't happen.  The Christmas season is a good time for this, as there are all sorts of other stories crowding the media, and Trump's comments get lost - as the comments of most former Presidents tend to do in any event.

2. He read the polls:  It may be that Trump is indeed getting out in front of the parade, as he realizes that "anti-vaxxer" isn't a position that will win elections - once the vast majority of Americans are vaccinated.  And as more and more people die, it will become harder and harder to stick with this program.  Indeed, we are closing in on a million dead - sometime next year - and that will be a landmark right before the mid-term elections.  I think, too, he sees that the anti-vaxxer crowd is pretty small.  He's having trouble getting 5,000 people to show up at a 20,000-seat arena.  In the old days, he might have filled it!

3.  He's trying to normalize:  If he wants to run in 2024, he needs to appear to be less radical.  My neighbors who were Trump supporters took down their yard sign on January 7th and today make no mention of him.  Or, if they do, they suddenly have this amnesia about voting for him - and say derogatory things about him.  He went from winner to loser overnight, and many in the middle-class turned on him with the "stop the steal" and the insurrection.  If Trump wants to win them back, he has to appear to be somewhat normal, at least until he gets elected.

4. He wants to avoid jail time:  With so many investigations going on into his businesses, his taxes, and the insurrection, he may feel threatened.  Time to polish your image and appear to be a nice guy - maybe then, they will call off the dogs.  It may sound far-fetched, but I suppose it could be true.

5. He really had a change of heart - or didn't.  It was no secret that he was indeed vaccinated, it was just something he didn't talk about.  And while many politicians on the right are vaccinated (and will admit to being so, if pushed) they still talk about "freedom of choice" and banning "mandates" and whatnot.  This way they can dog-whistle to the anti-vaxxers while still courting the vaccinated vote.  There is a small possibility that he really has changed his mind about vaccine mandates and mask mandated, but I sincerely doubt it - only because he has no sincere beliefs, just what he thinks will poll well (like any politician, I suppose).

What worries me about all of this is the parallel to the rise and fall of Hitler - and his rise again.  You may recall that early on in his career, Hitler was involved in an ill-fated, almost comic attempt to overthrow the government, known as the Beer Hall Putsch.  It was a comedy of errors - poorly thought out and with little chance of success, and everyone went to jail, including Hitler.  is political career might have ended right there, if not for his publishing Mein Kamptf and the subsequent rise of the Nazi party.  In order to rise to power, though, Hitler had to transform himself from rabble-rouser and street-fighter to respectable politician.  Gone - for the time being - were the Nazi uniforms, and suddenly, he was dressing in morning coats and tophats - like some sort of diplomat.

It wasn't that he was going to convince the opposition to support him, so much as it was to calm nerves and make people see him as less of a threat.  It was a carefully calculated move, and once he was in power, he was able to show his true colors - and the rest is history.  Trump did the same thing during the run-up to the 2016 election, posing as a "progressive" fighting for the little guy, and even as a liberal Republican.  Once in office, the gloves came off.

And no doubt, if Trump was re-elected, he wouldn't have changed his tune.  If the insurrection went as planned, well, it is scary to think what would have happened.  So much talk of "martial law" and suspending the Constitution came about during that time - only a year ago, today!

I suspect that the GOP is seeing the writing on the wall.  These extreme positions and shout-outs and dog-whistles to racists and militias and Qanonsense isn't going anywhere, and what's more, turning away centrist Republicans.  When you try to throw out as many people as you can from your party, you end up with no party!  Take a page from the Nazi playbook - no "night of the long knives" until you've consolidated power!

What is interesting is that this faux progressiveness isn't limited to Trump.  Tucker Carlson, the definition of "mouth breather" if you look it up in the dictionary (his facial expression is perpetual alarmed Pikachu) is now claiming to embrace progressive causes, at least some of the time.  Are we being gaslighted here?

Or maybe both Trump and Carlson have lost their minds - long ago. Trump recently went on an antisemitic rant, claiming that American Jews betrayed him by not voting for him, after all he did for them with Israel.  He's crazy, of course.  I think many Jews were more concerned with his tacit endorsement of ultra-right-wing bigots and racists, who they see as more of an immediate threat to them personally.  Israel has demonstrated time and time again that it can defend itself.  The rash of antisemitic incidents in America, during the Trump administration, is more cause for immediate concern.

Trump sort of gave away the game, however, when he noted that fundamentalist Christians in America were very pro-Israel, which is sure to make Israelis uncomfortable.  Until fairly recently, many in the fundamentalist Christian movement were indeed very antisemitic, calling Jews "Christ-killers" even though Jesus was Jewish.  End-times theologians, however, started preaching that the "end times" won't occur until Jews return to claim Israel.   So the support Israel not because they love Jews or Israelis, but because they want to see the world destroyed.  It is not a healthy thing, and I suspect it makes more than a few Israelis uncomfortable.

I think the only conclusion I can reach is that Trump lost his mind - long before 2016 - and has no real direction or plan, other than on a day-to-day basis, and a unwavering conviction that whatever he decides to do at the moment is indeed the right thing.

It is scary that some folks think he is fit to be President again, in 2024.