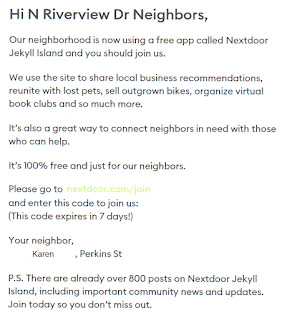 Silicon Valley hasn't figured out a way to monetizing wiping your ass, but they will surely come up with an app for that, soon!

I wrote before how so much of the "tech-that-is-not-tech" today is just creating an "app" for something that people have already done for ages, and then monetizing it - often screwing hoards of people, usually little people, in the process. Take some crappy minimum-wage job like driving a taxi or delivering food and then turn it into an "app" and then call all your employees "contractors" and make them fork over a hefty chunk to the corporate office - and profit!

If you don't skim money right off the top from financial transactions, you can pepper your customers with advertisements.  Better still, you can use "AI" to scrape keywords from their postings, or just figure out what they are clicking on, and then sell this data to marketers who will use it to target your customers for product sales.

The latest gag from our "friends" in silicon valley is a new "app" designed for nervous housewives, called "Nextdoor." What it does is monetize gossip. Unlike Facebook, Nextdoor is limited only to people living in your immediate area (in theory, anyway) and you can exchange information on local happenings and upcoming events!

In other words, gossip.

And as we learned in school, gossip is evil.  Not surprisingly, there soon were a host of unpleasant incidents involving Nextdoor - Karens bullying people they didn't like, or calling the Police when they see a black man entering a house - that he owns and lives in.  Nextdoor claims it isn't racist - and for all I know it isn't.  But just as Facebook didn't set out to promote Qanon, there you have it - unintended consequences which were predictable consequences.

Just a hint for you "social media" developers out there - when designing a social media site, just assume, as baseline, that people are horrible and will do the most horrific things. You will not be disappointed.  Granted, the vast majority of people in the USA are decent folks, but the few evil ones tend to be the loudest voices on social media.  In addition, even the "decent" folks end up saying things online that they should keep private.

Not only that, social media has been shown to take perfectly normal people and turn them into blithering idiots - after all, look what this blog has done to me!  But seriously - social media extends the reach of cults, terrorists, conspiracy theories and other nonsense, worldwide.

But Nextdoor, like Facebook, can't afford to moderate users, at least not enough to make a difference. As a result, there have been a plethora of racist incidents - as well as other unpleasant incidents - involving Nextdoor.  I guess the folks at Nextdoor thought (naively) that since you know the people posting stuff and they live down the street, the system would police itself.  No one wants to make a faux pas in front of neighbors!  But face-to-face communication and online communication are two different things.

Worse yet, thanks to Nextdoor, you now know that the people four houses down think that the election was stolen and that Qanon is real (and vaccines are fake).  Sometimes it is better off not to know.  It is like a friend of mine (well, I hope they are still a friend) who "outed" himself as a Trump fan, after four beers.  I mean, I really respected the guy, but now I am wondering if he has lost his mind. It makes things awkward, too.

Sometimes it is best not to know your neighbors.  Mark is very good about this - we keep our relationship with our immediate neighbors as an "over the fence" kind of thing.  We wave and say "Hi" and maybe chat for a minute when taking out the trash and that's it.  You don't want to get too close to neighbors, because if the relationship goes South, well, it gets awkward.

We invited our former neighbors (both have since moved away due to age) over for dinner once.  On the Left side of us was a couple who were liberal Democrats.  On the Right side - well, conservative Republicans.  All went well until dessert, when our liberal neighbor started going on about George Bush, at which point our conservative neighbor stood up and said, "That's it!  Marge, we're leaving!"  Once again, Mark and I are stuck in middle - politically, metaphorically, and literally.   It was a mistake to invite them both over at the same time - probably a mistake to invite them over at all.  Keep things at a distance - friendly but remote.  This is the way.   You don't have to be friends with everyone.

Note how they use FOMO ("Don't miss out!") and your native curiosity to get you to join.  What are people saying?  Maybe I am missing something!  I'd better join right now!  Of course, the point of getting people to sign up is to create a huge user base (even if most people never go on it) so they can jimmy up the stock price.

I am not sure that I need to join Nextdoor to keep up on the latest gossip - people gossip as it is, and on our tiny island, there isn't much people don't know about one another.  When we bought our house, the closing attorney (who lives here) said, "Welcome to Peyton Place by the Sea!" and we didn't know what he meant.

But we soon found out.

Old people are fine and all, when they are the kindly Grandmother baking you cookies.  They can be evil, though, to each other and their children.  Ask Mom some time, how she gets along with her Mother.  She will describe someone who is totally different from the kindly Grandma you know.

Old people will blackball each other from social groups (figuratively or literally) which is why so many of the social organizations on the island are dying out (that and the "new residents" are all in their 50's, from Atlanta, and come here on the weekends and are not interested in joining your supper club!).  They are getting so desperate for members they even asked us to join, to which Mark firmly said "No!"

I was a little disappointed, as I was looking forward to entrees from the 1968 Campbell's Soup Cookbook. or the 1970 Jekyll Island Garden Club Cookbook, which admonished readers not to use more than "one or two drops" of Tabasco sauce in a casserole, lest it be "too spicy!"  We tend to over-romanticize the mid-century modern era.  Life was pretty primitive back then.

But times have changed and people are changing.  And people no longer join the supper clubs and the art guild and the garden club.  They spend all day long looking at their phones.  They may know their neighbors on Nextdoor, but may have never met them in person.  So Nextdoor replaces the "over the fence" conversations people use to have, or the gossip they spread at the sewing circle, or I suppose, hundreds of years ago, the gossip shared when a Babushka would go down to the well to fetch water.

And that, right there, is the problem.  Nextdoor, like so many other social media "apps" makes it easier to "cocoon" indoors and not see other people - or see others as human beings as well.  We become avatars and characters online - no different than Alex Jones, who claims his online persona is just for entertainment.

One could argue, I suppose, that what social media such as Nextdoor does, is just expose how awful we all really are, as people.   Racist jokes told in private are now online, and we know what horrible things people think and say.  Before, well, they could at least keep up appearances when out in public, because there as a presumption that decent people didn't behave like that.   But with social media, well, you can find plenty of people behaving badly, which in turn, normalizes bad behavior.  No need to hide your racism or your bullying, anymore!  The rest of your friends on Facebook feel the same way!

Of course, Facebook has a particular problem in that it puts people into "silos" which became echo chambers.  You say something racist or admit to a conspiracy theory and pretty soon, your "friends" who are aghast at such things unfriend you.  But the friends you keep - and your new friends - all agree with you, and share the same sorts of postings.  Pretty soon, you are convinced the world agrees with you.

That, in short, is why so many people were sucked into Trump's "stop the steal" movement.  All their friends voted for Trump!  No one they know is a Biden supporter, except the caricature of one (a gay transgender "Bipoc" person from San Francisco, sipping a Starbucks while on their iPhone driving a Prius).  So there was no way Trump could have lost - no one was against him!  I mean, other than that one guy in San Francisco!

And on the other side, same deal, which is why Hillary lost.  All those people in Michigan, Wisconsin, and Pennsylvania - they have to vote for Hillary - there can't be a single Trump supporter in the whole state!  Echo chambers - they distort our view of the world.  Sometimes, you have to listen to opposing ideas, even though you disagree with them - just so you know they exist, and people who believe in them exist.

I am half-tempted to join this Nextdoor thing just to see what horrible things people say.  Or perhaps join, and then spoof the whole thing by making subtly racist comments, like, "I saw a black guy walking down the street.  Does he live here?" - and watch the fun as they all pile on.

On second thought, that is probably a bad idea.

We do have a "Citizens Association" here on the island and they publish a newsletter. We aren't members, but it is so poorly organized that Mark gets the newsletter by e-mail anyway.  What's more, our friends tell us all the gossip, what was posted on Facebook, or what was in the newsletter.  I am sure they will more than keep us informed of what the old busybodies on Nextdoor are up to as well.

Gladys Kravitz is alive and well and on Nextdoor!

What is sad to me is that social media is expanding more and more.  People spend all day looking at their phones - checking e-mails, texts, facebook, twitter, nextdoor, youtube, ticktok and whatnot.  Every website wants to send you "notifications" so you can stay up-to-date!  Up to date on what?  Other than the hurricane alerts, I really don't need to keep updated, in real-time, about much.  Maybe an update app on when the local pub is offering 2-for-1 beers might be useful.  There probably already is one.

And while I'm there, I can get caught up on all the local gossip.

UPDATE: Nextdoor went public through a SPAC, so you know how legit it is.