I Have Read Thousands of Tweets... 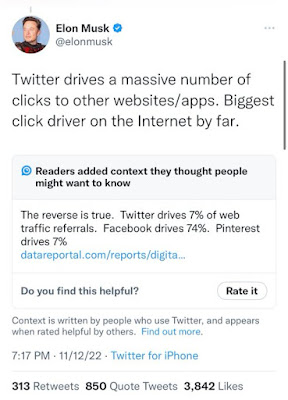 The big problem for Twitter is making money.  Twitter never made money, and in fact lost a billion dollars a year.  Now it has a billion dollars in interest to pay, every year, on top of that.  Unless the Saudis are willing to pony up two billion a year, it is unclear how the service can continue.  Maybe a Chapter 11 reorganization?  But then Musk loses all his investment (as well as the Saudis) and the banks call their loans - with Musk's Tesla stock as collateral.

Well, maybe it is time he retired, anyway.  Always know when to leave - and leave at the top of your game, not rock bottom.

I have read thousands of Tweets over the years - often against my will. They are published online on news sites and other websites (Facebook, Reddit, etc.) and even in print periodicals. The problem is, when republished, none of these Tweets are accompanied by advertising. So if you advertise on Twitter, your audience is pretty limited.  Not many people use it, and those seeing the Tweets on other platforms (which is probably the majority of viewers) never see the ads.

So why would anyone advertise on Twitter - even before the whole hate speech and impersonation fiascoes?

Elon Musk claims that Twitter is the number one driver of site referrals.  But not only is that wrong, but laughably so.  This guy didn't do his due diligence.  Facebook still drives over 70% of click-through, while Twitter comes in at a distant second place, tying with Pinterest of all things, with 7%.  That's a big, big difference.   If Musk really thought that, now I understand why he overpaid for Twitter.

That, in short, is the problem with trying to monetize any online site - social media or not.  If people talk about the site but don't actually go on it and read the ads, what is the point of advertising on the site?

Like I said, over the years, I have probably been forced to read over 1,000 Tweets - possibly far more - in news articles and on other sites, such as the one linked above.  I have never visited the Twitter site and thus never read an ad on Twitter.

Twitter ends up creating free content for other sites - particularly news sites - and I doubt Musk can charge them royalties for their use, particularly if they are embedded in the site.  But more than that, news organizations can republish a Tweet under the "fair use" exception to Copyright law.  If an important political figure makes a Tweet (like you-know-who) the media has the right to print that and discuss it as a newsworthy item.   And even beyond that, it has long been held that short phrases and sentences are generally not copyright-able (which is why t-shirt slogans aren't protected - you can't claim copyright to "have a nice day!")

While Twitter has, in the past, succeeded in Copyright cases involving photos, I am not sure that short phrases would pass muster as being copyright-able material - and "Fair Use" might just blow it out of the water.  But all that being said, Twitter would spend more money on litigation than would be realized in damages, and the shear volume of cases would drive it bankrupt.

It is an interesting conundrum for Musk - he owns this thing that is worth very little, but he paid a lot for it.  Trying to "monetize" it won't work, either - $8 a month is what Netflix charges and they provide more than mere Tweets.  Yes, there are theoretically some 186 million Twitter users (not all are active) but of those, how many will pay $8 a month for a blue checkmark?  If Musk could get all of them to pay, sure, he could rake in 17 billion dollars a year.  But so far, the only people paying the $8 are folks who paid it once to set up a parody account, which was quickly deleted by Musk.  No doubt, the users requested a charge-back from their credit card company.

Just to cover their debt load of a billion dollars a year, they would have to get 10,416,666 people to pay that eight bucks a month - or about 5% of users.  According to some sources, ten percent of Twitter's "active users" drive most of the ad revenue for the company.  And the number of "active users" is in the decline. Whether Musk expects the people creating wealth for him, for free to pay for the privilege remains to be seen.

It is akin to blogging.  I create content here and I don't get paid for it.  I tried to "monetize" my blog once, but found out what many bloggers and vloggers and podcasters and Youtubers have learned the hard way - your "van life" podcast isn't even going to pay for gasoline, much less make you a living.  I cleared about $2500 after a year, and the site was so clogged with scam ads, I felt it wasn't worth it.

Therein lies the rub - the Internet used to be a fun place where people did things that were about more than raking in cash.  Whenever someone tries to monetize something on the Internet, it usually starts to suck in short order, as it becomes more like commercial television or a carnival barker.

And when that happens, users flee in droves - as happened to MySpace back in the day.

UPDATE:   Maybe Musk isn't so dumb after all.  As a CREDITOR of Twitter, he and the Saudis may be protected in bankruptcy.  Shareholders would lose their shares, bond-holders become shareholders.  So he ends up owning Twitter (with the Saudis) debt-free and can start over.   I guess we'll have to wait-and-see.  Can he keep it going with this massive debt-load and daily losses?

If advertisers don't come back (very possible now that "free hate speech" is online) I don't see where else it could go...