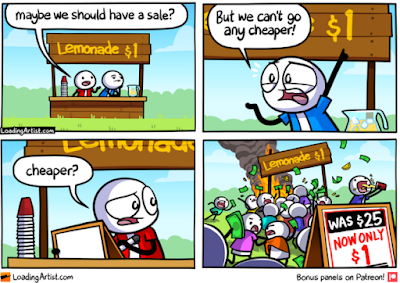 One sure sign of recession is when retailers act desperate.

Another "Black Friday" has come and gone, and some are reporting that sales are less than expected.  Many are buying only what they need, and only if the price is really reduced - as opposed, to say, fake price reductions such as shown in the comic above.   Yes, retailers claim to offer "50% off suggested retail price!" on sale, when in reality, their everyday price is 60% less than this magickal made-up "suggested retail price" that no one in the history of mankind has ever, ever paid.

UPDATE:  On the other hand, this article claims that "Black Friday" online sales have shattered all records!  Although that is a different metric than in-store sales.  Perhaps both reports are true - people are buying stuff, but more online than in-store.  Why fight crowds when you can click a mouse?

So maybe people are wising up to Black Friday nonsense. Or maybe, like me, the thought of fighting crowds for the privilege of buying crap is just not appealing.  Taking my money is a privilege for them, not me.  But you'd be amazed at how many "consumers" hand over their cash with blubbering thanks, in exchange for some cheaply made bauble from China.   And then they wonder why they are broke.

Maybe people are starting to catch on that just because prices have gone up, doesn't mean you have no choices, particularly when corporations are making record profits.  Maybe if people bought less, they'd have to lower prices.  In traveling across America this summer, we saw inventory stacked literally to the ceiling at Walmarts and Dollar stores.  They have the product.  There are no "shortages" due to "supply chain" as in the past, other than perhaps for some spot items.  And it isn't like you can't buy substitutes, either.

For example, there has been a sporadic "shortage" of frozen french fries and the like.  You can pay the exorbitant prices, or learn to simply do without and substitute another item - for example, sweet potatoes or maybe less starches - they aren't that good for you anyway.

But it takes time for people to realize this.  Shrinking your spending is a lot harder than expanding it. And most folks will keep paying and dip into savings and increase credit card debt, until they reach a limit where, one day, "suddenly" they can't make the minimum monthly payment.  When forced to do so, people eventually cut back.   So the signs of recession are everywhere, and are already occurring overseas in places like the UK (which is suffering from Brexit and an energy crises).  But it can take months or even a year or more before people really feel the pain.

Real Estate is still hampered by shortages of "starter" homes for first-time buyers.  This has kept the market artificially hot, as the days-on-market for housing is deceptively short.   But the actual number of sales is declining - and again, blamed on lack of inventory not lack of buyers.   A recent article about the Jacksonville market gives pause - people are not only buying less, but many who have signed contracts are backing out - as rising interest rates makes previously agreed-upon prices, unafforable.  The see-saw of interest rates and housing prices cannot be denied!  Yet so many people have tried to explain to me that doubling home mortgage interest rates has no effect on housing prices (!!).

At the very least, housing prices are due for an "adjustment" - some say by 20% or more.  Already, since May, housing prices overall have dropped 5% - although in some markets (such as ours) people are still paying crazy prices for houses.  A townhouse which sold a few years ago for $250,000 was recently sold for over $800,000.  Another, over a million.   Who are these people with all this money?  Paying cash, too.  I guess those PPP loans were a good deal.  Too bad I closed my business a year before the pandemic.  Timing is everything - and hard to do.

What is interesting, too, is how retailers are SPAMming the crap out my inbox (and Mark's) offering "sale prices" nearly every day since November 1st.  A filter company in Michigan sends me daily reminders I need to buy more filters - and at great savings!!!   Both Eyebuydirect and Zenni are hounding us to buy new glasses, which at sale prices are still more expensive than last year.  I am getting pleas from Nag Campa, Murphy's Naturals, Merrell sneakers, and many more. They are all decent retailers that I have bought from before, but their desperation in marketing is somewhat disturbing - and annoying.

We just had our eyes examined, so I was planning on getting a new pair of glasses (after three years, the pair I have is getting scratched).  And sneakers?  You have to buy new ones every year or so, as I have noted before, as they compress and provide no support - although you can extend their life with a "Mr. Scholls" insert.  Yea, we are getting old - we give each other clothing as Christmas presents.  I used to resent getting new socks for Christmas as a kid.  Now, I look forward to it. Dickies are great, although I have found some nice ones from Wrangler, too.  Sock makers are starting to realize that not everyone has size 8 feet!

But these were things we were planning on buying anyway - we started talking about it back in September, before the barrage of online ads (say,  you don't suppose the Internets overheard us talking about that on our phones and targeted ads to us, doya?  It's been done!).   But impulse-purchasing a "big ticket" item on Black Friday?  Or buying expensive gifts for friends and acquaintances as they suggest in the media?  Buying the wife a car?  Nah.  Ain't doin' that!  People who do are idiots - and going to end up deeply in debt as a result.  Gift giving is about thoughtful little trinkets - and it is optional and doesn't have to be reciprocal.  The merchants and marketers have tried to turn it into a war of attrition - so the last person standing with available credit on their card is the winner.  It is sick nonsense.

And maybe people are getting wise to this, over time.  I think most folks realize that a lot of "Christmas" has been about consumerism, and it is not the fun part.  Sure, swag is nice, but I'd rather buy my own piece of electronic junk and let my neighbor buy his - instead of each of us buying the other something they didn't quite want (and we end up taking them back to the store for an exchange).  It is just silliness.

But I think also, we are seeing the inevitable result of stagnant wages, high inflation, unreasonable price increases (for no apparent reason), rising interest rates, and declining savings.  The Fed has basically said that they are intending to deflate the housing market by raising rates.  It is not some far-fetched idea, but a planned strategy.

What happens to the guy near me who just paid nearly a million bucks for a house that sold a couple years back for half that amount?  If housing prices do drop 20%, he's upside-down on the loan, if he has one.  Not only that, the appraised value means staggering property taxes and insurance rates as well.  The monthly cost of owning such a home would be well over $4000 a month - and such homes rent for less than $2000 a month, full-time.

Sure, you can play the AirBnB game and hope they don't destroy the house.   But the market eventually saturates with AirBnB rentals, which is one reason why, in many markets, there is a "shortage" of homes for sale  - too many are being bought by folks who think they can make a quick buck with nightly rentals.  More and more jurisdictions are either enforcing laws against such rentals or amending zoning restrictions to prevent them.  Topping that, many more are realizing that you can rent a hotel room for less money than an AirBnB rental, and you don't have to clean the house or make your own meals.

Now toss in the stock market.  If you look at certain charts (YTD with the Y axis starting at 28,000) it looks like the market tanked - at least a few months back.  But if you expand the chart, you realize that it is just a blip, historically - and that even the 2008 crash ends up a small blip over time.  Bitcoin (and other crypto) on the other hand, seems to have taken a serious hit, losing about half its value in recent months.  Tech stocks seem to have followed a similar pattern. Layoffs in the tech world are rampant.

This is why, in short, I have invested mostly in traditional things that pay interest and dividends, and shied away from speculative investments that rely on "the greater fool" to pay me more for the "investment" later on.  Periodic fool shortages cause these speculative "investments" to crash.  But people who invested in rational things end up doing OK.   Folks who don't get caught up in real estate schemes such as flipping, end up OK - if they bought early on and got a low-interest rate mortgage and paid it down over time.  The speculators?  A few do well, most get creamed.   It goes without saying that the really smart people are the ones who buy those homes in foreclosure, after the wreckage has settled to the ground.

So what's the point of all this?  Only that I think we are due for a correction and a lot of little people will once again get hurt, and a few wealthy people will get wealthier.  Some companies that were never making money and never would, will go under, as well as some companies that were hanging on, but had their loans called in a declining market.   People who pledged all their stock shares as collateral for loans will have those loans called and be forced to sell shares.  You could go from the "richest guy in the world" to bankrupt, overnight, particularly if you made some bonehead financial moves.

Maybe the sobriety of a recession is in fact, what we need in our economy to get people to stop acting like immature jerks.   We've seen more than a few "celebrities" lose it all in recent months by embracing racism and antisemitism - and then blaming others for "cancel culture" arguing that the general public is obligated to buy their endorsed products and watch their movies even as they profess odious beliefs.  We have no choice - the first amendment mandates we give them our money!

And sadly, people seem to go along with this.  We are over-fed, over-paid, and over-consume.  Maybe it is time the tree needs pruning.

Based on how desperate some retailers are acting, that time may be coming soon.