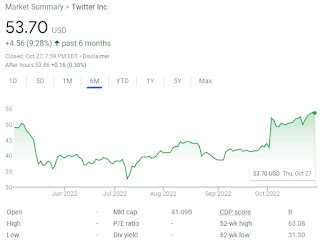 From "richest man in the world" to homeless - in a matter of months?

A reader asks what I thought about Elon Musk buying Twitter.  My first reaction, having worked for Fortune 500 companies (and represented some as well) is that in the "good old days" our CEOs were reserved and serious people who wore expensive suits and ties and were not to be trifled with.  They were not big goofy overgrown kids who said outlandish things or performed stupid stunts like carrying an old sink around to make a really, really stupid pun.

But maybe, once again, our generation won, and today, well, we all dress and act like big goofy overgrown kids.   So maybe this is the new norm - mentally-ill Billionaires.

What is the deal with this deal?  Musk buys a company that is losing $1B a year, and then saddles it with interest payments of $1B a year, and advertisers are already fleeing.  GM pulled its ads from Twitter, which was a smart move.  If they waited for odious content to appear on the site, they would be accused of "cancel culture" by the far-right.  This way, they have pulled a preemptive strike, and walk away with clean hands - and saved themselves a ton of dough.

If other advertisers - and users - follow suit, what is left for Twitter's business model?  Musk himself claimed the site was mostly bots.  Few ordinary people use Twitter - as opposed to say, Facebook (which has its own subscriber problems).  It is - or was - popular with the media, who would concoct an entire front-page story from one 144-word Tweet.   Lately, however, it seems that the media is fixated on Reddit - there is more "red meat" (pun) there to work with.  Reddit, like the mainstream media, loves a good outrage story.

Financially, the people who made out in this deal - besides executives who get golden parachutes - are the shareholders.  Musk paid far too much for the money-losing company, and even in the days leading up to the sale, the share price was below the buyout price.  So those executives he fired, in addition to getting golden parachutes, are probably exercising very lucrative stock options as well.

Of course, Musk is a large shareholder as well, but since he is buying the company (and not selling) he doesn't get to cash in on this deal.  He is left holding the bag. As the above chart illustrates, he is paying a huge premium for the company (well, he and the Saudis and the hapless banks who agreed to loan him the money).

But speaking of those banks, I'll bet they made him pledge his shares in other companies (Tesla, SpaceX) as collateral for the loans, because the Twitter stock wasn't worth the amount he was borrowing.  If they were ever to call those notes.... Musk might have to sell off a lot of stock or even entire companies.   We'll see.

I mentioned before that Musk could go bankrupt. Maybe this is the way...
Some say he only went through with it to avoid SEC charges over his tweet about buying twitter.  The SEC was already losing patience with him, for example, for his "$420" a share takeover bid for Tesla (which was fictitious).  Again, we have a CEO making bad puns, this time about pot.  Tweets like that are simple stock manipulation - and it worked, as the price of Tesla shares did spike, allowing a few people to make a lot of money and a lot to lose a little.
So when he tweets that he is buying Twitter for $54.20 (420 again?  Immature!) it raises the hackles of the SEC.  The share price spikes on that announcement and not coincidentally, Musk already owns 9% of the company - at a price far less than $54.20 a share.  Spike the price, sell your shares (or leverage with options) and profit.   If the "buyout" was a sham, well he could actually face jail time.
So he makes it official - on paper.  And the Twitter people surprisingly agree.  They know he is overpaying for a company that has never made a profit and in fact has been hemorrhaging cash to the tune of $1B a year.  This year, the net losses have been decreasing ("only" a quarter billion or so) so maybe Twitter is digging itself out of its hole, much as Facebook did (which lost money early on, only to make a lot later).
Maybe, but there are two problems with this scenario.  First, now that Twitter has nearly $1B in interest payments to make every year, Musk has effectively dug that hole a billion dollars deeper.  It will be hard to dig their way out of that hole, unless they can increase the user base significantly, bring on more advertisers, and increase ad rates.  All three are problematic.
GM has already bailed and no doubt other advertisers will follow suit.  If the site becomes a toxic mess of un-moderated "freedum" (antisemitism, racism, misogyny - and the rest of the usual suspects) it will go the way of Parler or Truth Social and both users and advertisers will flee.  With fewer users, the ad rates drop as well - it becomes a death spiral.
With so many choices for "social media" today, people may find Twitter as outdated and quaint as MySpace has become (or maybe MySpace will come back?).   What is and isn't popular is based on the whims of the population.  And if people decide Twitter is "uncool" they may flee in droves - to the next shiny bauble on the Internet.  If only I enabled comments here, that could be me!  Just kidding.
All that being said, I could envision  scenario where Twitter continues to hemorrhage cash as it loses users, requiring Musk to pour more borrowed money into the gig.  Banks, balking at the prospect of setting fire to more cash, would force Musk to sell-off some of his other assets to keep Twitter alive. Either that, or he will try to sell off Twitter to some other chump - at a fraction of the price he paid.  Either way, he loses money.
A year or two ago, some major automaker might have been interested in buying Tesla, rather than develop their own EV technology.  But today, nearly everyone is in the game, and Tesla now has a "dirty halo" as being the car company run by a neo-Nazi (well, not quite neo-Nazi just yet, but stay tuned, he is, after all, South African - right?).  This will turn off liberal customers and of course, the right-wing that Musk is courting hates EVs.   Maybe Musk needs to come out with a coal-powered car?
In a way, the Kanye West debacle illustrates how things can unwind in a hurry.  Musk could say and do outrageous things, as he wasn't dependent on Vogue magazine or Adidas for his income.  But actions have consequences, and no, facing your consequences isn't "censorship" or "cancel culture" - it just is what it is.  And if customers - of Twitter or Tesla - decide that they want to spend their money elsewhere, well, you can't force them or shame them into doing otherwise.
The whole thing could unwind like a chain of dominoes.   All it would take is a fatal mishap with a Falcon-9 rocket and things could turn around in a hurry.  And in the space business, mishaps are the norm.
But I doubt Musk will be found sleeping in a cardboard box anytime soon.  More likely it will be a "What ever happened to...?" kind of deal.
Newer Post Older Post Home