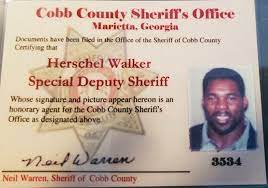 You can't debate someone who will never change their mind.

They used to hand out these if you joined the Howdy-Doody Club.

Last night, they had a debate between Reverend Ralph Warnock and Heisman-trophy-winner Herschel Walker.  Mr. Walker was, by all accounts, a star athlete, but is a deeply flawed man.  He has written about his multiple personality disorder (which one are we voting for?)  and it has come out that he has beaten and threatened to kill his wife - on more than one occasion.  What's more, he had a mistress, a child out of wedlock, and as a "pro-life" Republican, paid for an abortion for his mistress.

You'd think that would be the end of his short-lived political career.  But he is only four points behind Reverend Warnock, which is within the margin of error.   At this point, the GOP could nominate Jeffry Dahmer and he'd still likely generate support with the MAGA-faithful.  "At least he isn't in favor of abortion - and he does kill the gays!"

His nomination was a carefully calculated bit of political theater.  Republicans wanted "a black" to counter Reverend Warnock, as Georgia has a large black voter base.  And the GOP assumed that blacks would vote for "one of their own" regardless of his qualifications.  They also wanted to nominate someone who could be utterly controlled. Then again, they thought that about Donald Trump - let him tweet, but at the end of the day, Mitch will be holding the leash.  Wrong end.

The "highlights" of the debate, according to the media were two things.  First, Mr. Walker "softened" his stance on abortion, now claiming that abortions should be legal if the woman was raped, or a victim of incest, or her life was at stake.   How nice of him!  And by the way, that's how that works in real life - you can say one thing - that you are opposed to all abortions ever - and then "walk it back" for a "Me bad, do over!" and people are supposed to believe that.  "I was against Herschel Walker because of his stance on abortion, but now that he's clearly changed his mind and of course, will never change it back again, I support him!"

They really think we are that dumb.  And sadly, we are.

The other "moment" in the debate that the media thought was worthy was when Ralph Warnock pointed out that Walker lied about being a "Police Officer" and in response, Walker (in what was no doubt a carefully scripted move) pulled out a toy police badge (that apparently says "honorary police officer" or something) to "prove" he was a real cop.

In response to this, you see two arguments being made, by people who agree with themselves.

Democrats, seeing this charade, say to fellow Democrats, "Did you see that?  Herschel Walker pulled out that fake police badge and acted like it was the real thing!  The guy is delusional!  LOL!"

Republicans, particularly the MAGA-type, look at the same debate and say, "Walker owned the libs!  They accused him of lying about being a cop, but he showed them his badge!  Tee-hee!"

The problem is, these two people are not talking to each other, but instead meme-ing their friends and fellow-thinkers on Facebook, or repeating what they heard on their respective news feeds.   There really was no debate at all - the two candidates were merely making points with their own constituents, not discussing real issues or fleshing out their positions on anything - particularly when you can "soften" your stances in response to poor polling numbers.

And sadly, this is nothing new. You may remember a guy named John Kerry who ran for President.  The major "issue" of that campaign wasn't whether taxes should be raised or lowered, tacking the deficit, or foreign policy.  No, no, the "hot topic" was whether Kerry "threw his medals" over the White House wall, and if so, whether they were actual medals or just the ribbons.  The speculation and debate went on for weeks.  "This is disrespectful to our military!" the pundits whined, "We'd be better off with a guy who never went to Vietnam!"

They called that "Swiftboating" because they took his actual military war record (which his opponent didn't have) and turned it against him.  They got some of his former comrades to go on camera and say disparaging things about him.  Of course, it was only after the election that we find out that the allegations against him were entirely fabricated or at the very least, exaggerated.  The whole thing was funded by GOP operatives and orchestrated by the likes of Rodger Ailes.

Sadly, for most folks, this is what passes for political discourse.  And yes, you could argue that Ralph Warnock is no better in making personal attacks against Herschel Walker.  Then again, violently attacking your wife and threatening shoot-outs with the police is sort of important - more important than "how many medals did Kerry throw?"

What is really disturbing is that a lot of people simply don't care about Walker's past or for that matter, Trump's.   So-called "Christian" voters supported Trump because they wanted Supreme Court nominees, including the one stolen from Obama.   They didn't care that Trump hadn't seen the inside of a church since he was baptized, or that he was, in fact, the most un-Christian man ever nominated for the office.

Republicans just want a warm body in the Senate - a reliable vote who will do as he is told and votes with the caucus.  This is what it would come to - reducing the Senate to a rubber-stamp legislative body that does the bidding of the party leaders.   There would be no real debate in such an organization, just as there was no real "debate" last night.  Democrats excoriate members who vote against the party line or raise objections to policies.  Whether it is Ms. AOC or Joe Manchin, the reaction is the same - how dare you go against the orthodoxy.

And Republicans do the same thing with their own "Mavericks" - calling the likes of John McCain or Liz Cheney "RiNo's!" for daring to have opinions of their own, including the quite rational opinion that Donald Trump has lost his mind.  It seems the rest of the party is slowly coming to this conclusion as well.

But at critical moments in history, it is the actions of a few people that often turn the tide of events.  We saw this on January 6th, where a few people did their jobs and prevented an insurrection.  Some of them were injured and died.  Others merely lost their political careers.  But when push came to shove, they proved themselves to be more than a rubber-stamp of government policy.

If you want a pliable know-nothing who can be counted on to do the wrong thing on command, may I suggest this reliable candidate? 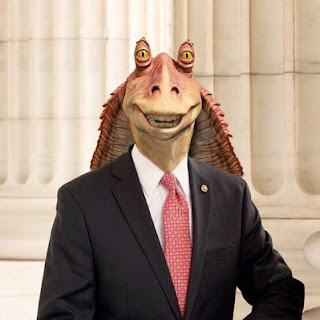 Not the brightest bulb in the galaxy, for sure!

But maybe he has an honorary police badge!