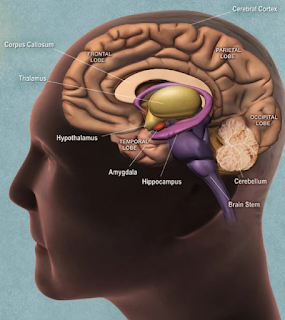 Check out the big brain on the human!

Over millions of years, various life forms have evolved on our planet.  Conditions change over time, and those that survive, reproduce and life thus "adapts" to changing conditions.   The dinosaurs were an example of "get big, fast, or go home!" and they thrived for quite a while until, we believe, radical climate change caused by a collision with an asteroid or comet wiped them out.  They could not survive such a change in conditions, although some of their progeny exist today in the form of birds and reptiles.

But mammals, a minor niche in the ecology at the time, thrived.  And millions of years later, well, we have early man.   Mankind's evolutionary trick wasn't large size, or adaptation to the environment, but the ability to adapt to multiple environments through the use of tools.  Humans are not very well adapted to our world - we are weak compared to most large animals, and have no claws or sharp teeth to use as weapons.  Worse yet, we have no fur to keep us warm or out of the sun.  We can't even really see that well - or at least most of us can't.

But, we can make clothes, build shelters, tame fire and organize into groups to hunt larger animals and fend off attacks from animals and other humans.  And we can even correct our own deficiencies, by correcting vision and even altering our bodies.   We have an immune system, but have found ways to enhance it through medicine. We are general-purpose machines, capable of adapting to multiple environments, from the bottom of the ocean to the vacuum of space.

In every species however, there comes a point where the species out-populates its environmental niche.  Fish breed until they fill the ocean, and eventually they run out of food.  So they either starve to death or another species feeds on them and keeps the population in check.  In some instances, a species can reproduce to the point that their environmental niche collapses and they become extinct.  Adapt or die.

Well, after millions of years, we are (presently) the apex of evolution of life on Earth.  And we have adapted, successfully, over the years, to changing conditions. As the population of humans exploded, it was thought that we would run out of arable land to cultivate and eventually starvation would cull our herd.  But Fritz Haber taught us how to fix nitrogen and land that would be dead after only a few years of crop yields, can now be fertilized indefinitely - or so we hope.  And insecticides and herbicides and genetically engineered crops mean than fields that once had crops in nice little rows, are now jammed to the edges with high-yield crops that grow packed as tight as possible.

It seems we have met every challenge thrown our way - but of course, the biggest challenge to these big-brain opposeable-thumb apes has been themselves.  We fight each other with regularity and kill each other.  We are our own apex predator.   Various wars over the years have served to cull our own herd, with each war becoming more and more devastating than the last.  The next World War would be our last, it seems.

But not only that, we are reaching a limit as to how many more people the planet will support.  In the semiconductor business, we had something called "Moore's Law" that stated that the density of transistors on a semiconductor chip would double every two years.  And it did, at first.  But eventually, you reach a point where photolithography techniques no longer work - when you are designing at photon levels.  Eventually you reach atomic levels.  And some argue that atoms themselves could be made into memory cells.  But even assuming you could, where would you go from there?  To individual protons and electrons?  Quarks?    There has to be an end-game to miniaturization.

Just as there is an end game to populating Earth.  And I suspect that we would never come close to a theoretical maximum population, before we would all turn on one another and kill each other off.  Yet some folks think this is the goal of humanity - continual growth forever and ever, amen. Others postulate that we should expand into the solar system and maybe even the stars.  But those ideas are proving harder to implement than first thought.

Living on Mars would be a combination of living in a deep freeze and a microwave oven.   You would have to live underground and get used to never being outside - except for brief sojourns in a space suit.  Is that really living?   And could we afford to support such a colony?   Everything would have to be imported from Earth - everything.   Folks don't realize how complicated it is to manufacture even the most basic of goods.  Your cell phone requires the cooperation of thousands - nay, hundreds of thousands - of people to design, manufacture, and operate.  People from all over the planet.  I wrote Patents on tiny aspects of one chip of dozens in a phone - tiny aspects that took teams of Engineers years to develop.  How are you going to do all that on Mars?   It just isn't an option for the survival of humanity.  Not only that, it condemns those remaining on Earth to a desolate existance.

Maybe our big brains can figure our way out of this mess - eh?  Or maybe our big brains are not so big after all.   After millions of years of evolution and thousands of years of civilization, the bulk of the world still believes in basic and stupid superstitions.  We have people today communicating primitive beliefs on their smart phones - whose workings they have no clue of.  But they have an opinion on vaccines and 5G technology.    Pretty weird.  Qanonsense, cults, MLM schemes, most religions - they are all based on faith and belief - belief in weird theories that have no proof attached to them, cannot be proven, and oh-by-the-way even questioning them is to evoke the wrath of the mob.

How are we going to think our way out of this mess?   It just doesn't seem possible.  As Emily Dickinson once wrote, "Because I could not stop for death, he kindly stopped for me..."  And if we do nothing to alter our future, well, Mother Nature will alter it for us.  The net results will be devastating and perhaps we are seeing them already today - droughts, fires, floods, war, famine, pestilence, epidemics.

The CoVid pandemic is not some weird anomaly but an expected result if you pack enough humans into a tight space long enough.  Some stray strand of DNA will mutate into something that kills you - and spread rapidly in places where humans are packed together.  So it is no surprise that the CoVid pandemic originated in China - one of the most crowded countries in the world.  As the population of the world increases, we can expect more pandemics like this.  Monkeypox, anyone?

And yes, our big brains figured a way out of this latest evolutionary trap.  We came up with a vaccine and practiced social distancing and wore masks, because our big brains developed science as a way of logically explaining things.  Whereas years gone by, we would have hung a few "witches" or made human sacrifices to the "Gods" - today we understand how viruses are spread and have ways of preventing the spread or even curing the ailments viruses cause.

Well, that works for some of us - people who don't use unproven "faith" and "belief" as a means of guiding their life.  And no, you cannot "believe the science!" because science is not based on belief, but experimentation and theory and more experimentation.  Yet a sizable number of people eschewed the vaccine, mocked social distancing and masks, and even came up with even more bizarre beliefs as to the origin and nature of the virus.  Some claimed it didn't exist!  Others said it was God's retribution.

So much for the big-brained humans, eh?

We can blast rockets to the moon and the planets, yet a sizable chunk of humanity would argue it is all faked and the world is actually flat.

But maybe this is evolution at work as well.  The death rates for Republicans from CoVid are nearly double that of Democrats.  Early on the pandemic, before the vaccine was available, the death rates were largely the same.  But once the vaccine came out, the infection rate and death rate among Democrats plummeted.   Charles Darwin, meanwhile, started culling the Republican herd.  Maybe enough stupid people will die from various pandemics and wars that the human race, as a whole, will get smarter over time and be able to figure things out.

Like, for example, how to survive on a planet without relying on exponential growth as the only way to keep an economy going.

Maybe, but I doubt it.  Because the stupid people of the world outnumber the smart by at least ten to one.  And when stupid people come into power, the first thing they do is kill off all the smart people - who pose a threat to their faith-based belief system.

Humanity.  It was fun while it lasted. Those humans had a good run, but in the end, they went the way of every other species on planet earth.  Big brain wasn't a way out.

I wonder what evolution will try next time?