Send in the Drones... 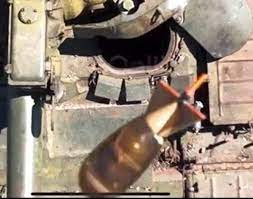 Militaries are always prepared to fight the previous war.

The weird thing about this war in Ukraine is that you can go online and see gory real war footage in almost real-time.  It is horrific and yet fascinating.  On television and in the movies, you shoot someone and they fall dead right away.  In real life, people might be shot several times or get hit by a grenade and take minutes or hours to die, as they slowly bleed out.  Like I said, it is horrific, and even if they are Russians, they are real human beings (well, some say, anyway) and many didn't choose to be there.

There is an old saying that the military is always ready to fight the previous war.  In the revolutionary war, the British lined up in neat rows and took turns shooting at their enemy.  Wily Americans took pot-shots at them from behind trees.  That's just not cricket!

In the Civil War, the same thing, with rows of soldiers advancing across the battlefield only to be blown up by artillery.  In World War I, the machine gun changed battle strategy, but not before a lot of people were gunned down. Trench warfare was the new thing, and after the war, the Maginot line would protect France.  But a newer form of warfare - Blitzkrieg, rendered trench warfare pointless.

We learned a lot from World War II - air supremacy being one thing.  But in Vietnam, we had to learn a new type of warfare - the insurgency.  Where was the enemy?  Why wouldn't they wear different colored uniforms than ours, with clearly marked insignia?  The guy cutting your hair in the afternoon could be the same guy slitting your throat that evening.  That's just not cricket!

We kept learning the same lesson in Iraq and Afghanistan - those insurgents just refused to wear uniforms and meet us on the battlefield, preferably in neat formations.  We spend 20 years and billions of dollars and they still won.

Today, Russia is trying to fight a "conventional" war with conventional and often outdated arms and tactics.  And yet, Ukrainians are doing things like dropping grenades with cheap drones - right down the hatch of a tank.  It has changed-up warfare once again.

Sure, we have drones - big multi-million-dollar deals that shoot hellfire missiles.  The Iranians are providing "suicide" drones that are little more than radio-controlled airplanes powered by lawnmower engines.  But tiny electric drones, guided by a cell phone and armed with a single grenade, cost little to buy, nothing to operate, and are silent and deadly.

There are videos galore of Russian soldiers "digging in" into trenches, only the be blown away by some cheap drone dropping a grenade on them.  You can see them squirming as they hear the buzz of the drone and know their time may be up.  Once the drone drops the grenade, they crawl out of the trench, peppered with shrapnel, bleeding to death.  It is horrific.

But it is modern warfare.  The idea you can "dig in" and protect yourself from gunfire or mortar fire, is kind of obsolete.  If you can see sky, they can see you.

Of course, this will lead to anti-drone jamming techniques, which may require broadband radio frequency jamming signals.  I am sure such equipment exists or is under development, but like any other form of warfare, one side raises the stakes, and so does the other.  Maybe you can jam RF signals, but what about modulated laser signals?  Or maybe signals from satellites?  Or just an autonomous vehicle that picks its own target and annihilates it.  Scary thought.

Defense contractors and the Pentagon are no doubt watching this war closely - like most "proxy wars" it has turned into a providing ground for weapons tech.  We are seeing in real-time what weapons systems work - and which ones don't.  And militaries across the globe are deciding to cancel their arms orders from Russia and buy American  - or from the West. Why buy Russian tech, when it is shown to be so utterly outmatched?

You can't buy PR like this - and sadly, this is what it comes down to.  It is like the air shows in Paris or Farnborough, where each country shows off their latest military and civilian aircraft - and hopes to fill their order books as well.  While it is nice to "kick the tires" on a new jet fighter, it is even nicer to see the gear in action against an opponent.  And this war in Ukraine is giving buyers a chance to do just that.

But I wonder whether the future lies not with million- or billion-dollar defense systems, but with cheap, inexpensive, and small drones.  Put 1,000 of them in the sky - they can't shoot them all down.  And 1,000 of them cost less than one fancy "reaper" drone from a major defense contractor.

I guess we'll see how this pans out.  It is a shame so many people will die over nothing, other than the vanity of a Russian dictator.

Maybe the military will be ready to fight the next war, though.  And there will be a next war - it is in our DNA.