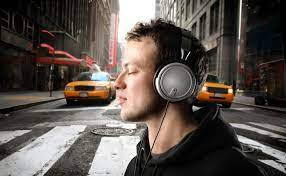 Are you being distracted from reality by loud noises and colorful baubles?


In Kurt Vonnegut's dystopian short story Harrison Bergman, he tells a frightening tale of the future world, in 2081, where everyone is made "equal" under the law, by being handicapped to bring their abilities down to the median level.  Under the direction of the Handicapper General, graceful ballerinas would have heavy weights attached to their arms and legs.  Beautiful people would be forced to wear ugly masks.  And smart people would be distracted constantly by distracting noises periodically played through headphones, so they could not hold coherent thoughts.

Today, it seems no matter where you look, we are being tortured by the Distractors - loud noises or distracting tasks that prevent us from really thinking.  And rather than being mandated by Vonnegut's "Handicapper General", people are willingly engaging in these distractions.

Cell phones, smart phones, and iPods are a case in point.  People walk down the street, wearing the headphones Vonnegut predicted in his story.  They are so removed from their environment that they walk out into traffic and are killed.

Loss of situational awareness, as they say at the NTSB.  A classic case of the Distractors at work.  She was so wrapped up in a parallel electronic universe that she failed to appreciate reality not 20 feet away from her.

But the Distractors take other forms as well.  In response to my posting about the three-million mile car, a reader tried in vain to convince me that driving 65,000 miles a year was not that abnormal, if you commute 25,000 miles a year (twice the national average mileage) and then drive "another 40,000" somehow.  Sorry, but no sale. That is a staggering amount of driving for anyone other than an over-the-road trucker.

And yet, even driving 15,000 miles a year is a lot - about 20 days behind the wheel at an average speed of 30 mph.  And that time behind the wheel is a Distractor - a time when you put your brain on "hold" and veg out on the way to work, perhaps listening to normative cues on Drive-time Radio.

Drive-time Radio is the most profitable airtime for a radio station - it is the time they get a captive audience of passive listeners, and advertisers pay top dollar to advertise then.   You are sitting, passively, and are the prime audience, receptive to all sorts of subtle suggestions.  By the time you get home, you are certain that buying a new car and a delivery pizza were ideas you came up with, independently.

Driving all over hell's half-acre is one way to insure that you won't be thinking straight.  Since it is such a time bandit, and you can't get any real work or thinking done, it is just a blank time in your life.  Think about it - why is it so hard to talk on the phone while driving, even with a hands-free phone?  It is because your mind is absorbed by the driving task, and talking on the phone requires a certain level concentration.   Eventually, you overload the CPU in your brain, and either drive into a tree, or lose the thread of the conversation.

And texting?  Talk about a Distractor!  And one which, when combined with driving, is often fatal, as the brain is utterly drained of any thought, and cannot function fully at the combined tasks it is performing.

Television is a big Distractor.  Did you ever notice how, when you try to talk to someone who is watching the television that they say, "Shhhhhh!"?  It is because you really have to concentrate to watch television - it takes up your entire frontal cortex bandwidth.  You cannot multi-task and watch TeeVee at the same time.

Television is probably the ultimate Distractor for most people - taking up time, feeding poor normative cues, and just programming your brain as though it was a cheap computer.  It prevents you from thinking - really thinking - about anything other than who got voted off your favorite Reality TeeVee show.

It replaces reasoned analysis with sound bites and "he said, she said" commentary.  And it replaces sound financial planning with "I want one of those!".

The secret is, I think, to get rid of the Distractors in your life.  Minimize your commute, avoid watching television, avoid plugging into worthless data networks such as texting and cell phones - which transmit a lot of noise, but no real signal.  If you can take the Distractors out of your life, you can sit down and really think - really think - about things in a logical and reasoned manner.

The question remains, though, why people voluntarily sign up for these Distractors?  In Vonnegut's story, the government forces people to handicap themselves.  Today, it seems, people put on these fetters willingly.

And I think the answer is, to drown out the deafening silence in their lives.  being distracted is one way of not thinking about the more important issues in their lives - their personal finances, or even death itself.   You can delude yourself you are "wealthy" by accumulating the trappings of wealth, and thus not worry about your underlying net worth.  After all, no one on television ever talks about net worth, do they?

And oddly enough, the other handicaps in Vonnegut's story seem to be willingly adopted by people today.  No one is wearing lead weights around their ankles, but people are eating themselves to an early grave - and ending up riding in electric scooters, 100 to 200 pounds overweight - trading their lifespan, health, and comfort for the transitory satisfaction of a plate of nachos.

And in a further frightening parallel to Vonnegut's story, attractive people seem to be wont to scar themselves with tattoos and piercings, convinced that perhaps they are too beautiful for the rest of us, and want to bring themselves down to a more pedestrian level.  Again, willingly, without government intervention.

Perhaps Vonnegut was on to something.

At the end of his story, the hero, Harrison Bergman, tries to lead an insurrection, by tearing off his handicaps, as well as those of others, to show people how they can be more than merely average.  Of course, he is then gunned down by the Handicapper General in the final scene.

No one is forcing us to be distracted.  Rather, we distract ourselves.  The choice whether to handicap ourselves in these various ways is really up to us - and it is a choice.

If you want to drive an hour every day to work, listen to the radio, the television, text on your smart phone, yak all day long on the cell, and then uglify yourself with permanent body scarring, all while overeating at the all-you-can-eat buffet, well that is a choice you are making.

And we are free to make these choices in this country.  That is the beauty of it.  But please, whatever choice you make, don't try to tell the rest of us that you are a victim of these choices, when they go horribly wrong, 10, 20, or 30 years from now.

You can remove the shackles of your own imprisonment, if you choose to do so.  Few do.
Newer Post Older Post Home