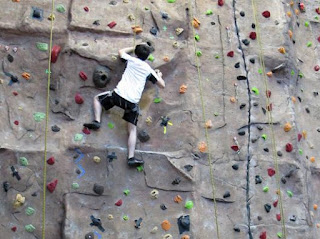 Is this worth a hundred grand?  I don't think so.


In a recent report on Marketplace on public radio, they discuss how many colleges and universities are trying to attract students with nicer amenities.  Rock climbing walls, fancy swimming pools, and athletic centers that are more like upscale health clubs are cited as part of this trend.

Colleges and Universities are abandoning any pretense of education at this point - and just pandering to whatever students want (hint:  If you really want to bring up enrollment, a medical marijuana dispensary on campus is a sure winner).

Why are colleges and universities just blatantly pandering to students these days?  The simple answer is demographics.  As I noted in an earlier posting, the number of college-aged students out there is dwindling.  And schools have to compete to put butts in the seats.

The larger schools are attracting more students, as they can offer more "amenities" and 18-year-olds don't think in terms of what education is best for them, but what looks like a swell time.

The mythology exists that any college degree - even one in rock-climbing - will lead to a lucrative career.   And this exchange between the interviewer and one student is, frankly, scary:

"Then again, those fees aren’t exactly coming out of his pocket.

Gaied: I rely on loans. So why not, as far as I’m concerned?

Scott: How much are you borrowing to go to college, do you know?

Gaied: A lot. A lot. It’s like a life tax. You know, like, if you, if you want a job, and you want to, like, go about your life and your business, it’s just something you have to pay. Like a car payment."

A life tax - for four years of partying and rock climbing, you spend forty paying it off.  This makes no sense.  And a car payment?  Cars get paid off, in three or four years.

(Hint to grads:  Saying "you know, like," at a job interview is a sure-fire way to get spiked).

And I think employers are catching on to this as well, which is why the unemployment rate among recent college grads is so high.   People spend four years smoking pot and rock climbing and putting fart-mufflers on their cars behind the fraternity house, and well, no one wants to hire them.  They are not educated at all, but rather overgrown infants.

The marketplace is voting - and what it is saying is that worthless educations are worth less - or worth nothing at all, in terms of increased income or job prospects.

Statisticians like to tout that on average a college grad makes X% more in life than a non-college grad.  But there are two things wrong with that statistic, actually three.  First, it is a backwards-looking statistic.  You cannot figure out lifetime earnings until people die.  So by necessity, this statistic deals with outcomes of your parents' generation, not yours.

Second is the fact that averages are deceiving.  Yes, a Doctor or a Lawyer or an Engineer may make more money than the guy who mows your lawn - a lot more.  But the guy mowing your lawn may have a degree in Philosophy.   Averages are deceiving, as for every person making ten times more than average, there may be others making average - or less.  And worthless degrees  - degrees that sentence you to a life of low-wage service jobs - are not enhancing your income, no matter what statisticians say.

(Actually, if you think about it, these college statistics are meaningless.  A person who graduates from college isn't likely to make less than a non-college grad.   At worst, he will make the same.   So you average in him with all the doctors, lawyers, and professionals to make boatloads more, and you come up with this specious statistic.   If you factor in the cost of college into the equation, many on the lower end are coming out behind non-college grads.   Not everyone who goes to college will make more money than those who do not).

The third thing of course, is that you are not a statistic and your personal choices, actions, inaction, motivation, and plain luck have more influence on your life than statistics.

Colleges and Universities are chasing smaller and smaller Freshman classes - and yet at the same time need larger classes to put warm butts in the seats to pay their ever-increasing costs.  So they have to offer free ponies to the kids to get them to come to their University.  If they can make college seem like fun and not too much hard work, they can attract more students.

But beware.  The multi-million dollar athletic center with the rock wall and whirlpool baths is a trap, just as the fancy new dorms, student center, and other trinkets they throw at you are all traps.  They have little or nothing to do with a real education - and employers know this.

When I was studying Engineering, we had a gym - a dusty old weight room with some half-broken exercise machines, and an old tile pool that had seen better days.  I don't recall spending time in much.  And in Law School, I don't recall going to the "student athletic center" more than once or twice.

Why?  Engineering was hard. So was the law.  I had to spend all my free time studying to get good grades.

But doing the hard thing pays off in the long run, whether it is studying hard, working hard, or saving hard.  Difficult pays, easy costs.

What comes easy is often the worst thing for us.  And a school that sells a climbing wall as an attraction to students, is, well, selling easy.
Newer Post Older Post Home