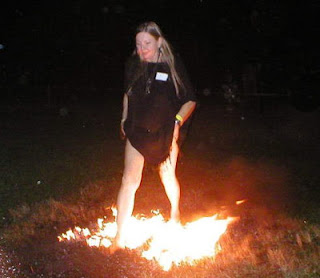 This is idiotic and proves nothing.


People love to follow Gurus and think that some other human being, for some reason, has a special insight into life, love, motivation, or money.   Think about this - a person who has been around on this planet for about the same time period as you have - who has had largely the same experiences you have had, has some special insight into human nature, the world, or the afterlife?  It makes no sense, of course.

The reality is, of course, that all of this same insight resides inside you, you just have to look for it, and nurture it.  And if you don't have it, you never will find it.

If you are prone to wasteful spending and doing stupid things to impress people you don't know, well, chances are, that isn't going to change, unless you can find that inner voice that says, "Hey, this is stupid!  Stop doing it!"

Guru Tony Robbins made headlines the other day, when several people were injured doing a firewalk  during one of his motivational seminars.

Firewalks are old hat - and an old fakir's trick, too.   Some folks actually think that a firewalk is an example of mind-over-matter - that you can literally "will" your feet not to burn, if you have enough faith.  Others think it is magical or a sign of supernatural powers.

Others view them as an example of taking risks and having faith in yourself, even if they understand the physics of how a firewalk works.  Sort of like those group exercises in motivational seminars, where you are supposed to fall back into someone's arms.

Can you walk across hot coals and not burn your feet?  Well, of course you can.  Why?  Not magic, but science.

Your feet are an interesting part of your body.  All of your body weight rests on them.   We abuse them routinely.  And yet, they are quite sensitive.  If you saw the movie Midnight Express you remember the scene in the Turkish Prison where they torture the hero by beating his feet.  It is, supposedly, a particularly painful torture, as it breaks the bones in your feet, and they are very hard to heal.

But your feet are very robust, and underneath your feet is a thick layer of callus.  And this thick layer can endure a lot.   For example, if you walk onto a hot asphalt driveway in your bare feet, you might not notice the heat for quite a while.  It takes a while for the heat to work its way through the thick outer layer of callus and skin before the nerves in your feet finally sound the alarm.

Then, suddenly, it is "OUCH!" and your jump off the hot driveway.

Firewalking is the same way.  You walk across the coals, but they extend only a few feet.  Before your skin can burn (or the nerve endings in your feet discover this) you are over it and standing in cool, wet grass (some put their feet in water afterwords).   The feet cool down and no real damage occurs.

But of course, some people do get burned, if they walk too slowly, or press down too hard (jumping or hopping, for example, instead of walking slowly and deliberately).   Or if the fire is too hot or the path too long, you will get burns.   It doesn't always work that you don't get burned, as one might expect.

It is not magic, or "mind over matter" nor does it prove anything about you as a person, your spirit or willpower, or whatever.  It is just bullshit, and if you believe in any of this sort of crap, well,  you are a first-class idiot, end of story.

But people fall for this sort of crap all the time.  They actually hand over money for the "privilege" of walking over hot coals.  Hey, give me $50 and I'll tip over my barbecue grill in the back yard and let you walk on it.  Knock yourself out.

How this is going to "motivate" you is a good question.  I have written about Motivational Seminars and how they are bullshit.   What you need in life is not "motivation" - which is just emotional thinking that will inevitably go awry - but more logical thinking.

Motivational seminars are great - for the people putting them on.   And they are putting you on, as well.  You tell people that the reason their life (or company or product) sucks is that they are not motivated enough.  And if they could just get this mystical "motivation" everything would be just fine.

In other words, everything is their fault because they don't have the proper emotional outlook.   But you can't make money from emotional thinking.   If your finances are in a wreck, it is because of a lack of logical thinking, not a lack of emotional thinking.  And if your company is going bankrupt, you might want to spend more time in the accounting department than in cheer-leading the employees.

And that is the beauty of Motivational Seminars!  People go to them, and get this rush - the same feeling cults use to get new members.  Suddenly, anything seems possible - if you just have the right attitude!

But Attitude is not going to pay your mortgage or help you find a job - logic will.  So the poor sucker fails yet again (and is $1000 to $2500 poorer for attending the seminar) and then thinks, "This must be my fault, I just didn't believe strongly enough!  If only I had the right mental attitude!"

So they sign up for more seminars - maybe with a different Guru this time, and the low-self-esteem engine chugs on down the track.

What Motivational Seminars prove to me is that the supply of brainless idiots in this world is endless.  And you can make an awful lot of money by exploiting the foolishness of others.  And I suggest you do it.

Don't get me wrong, I have nothing against this Tony guy, or Scientology, or whatever other foolishness people engage in.  Why?  Because you can't fix stupid, as they say, and being "against" someone who exploits your fellow man is often a waste of time.

Why is this?  Because the people who willingly allow themselves to be manipulated and used by others will defend to the death their abusers and manipulators.   And there reaches a point where you have to say, "Well, knock yourself out, there fella!  Send me a postcard!"

So, when someone pays $2500 to be "allowed" to walk over hot coals, I am hardly outraged or surprised.   People are idiots, look around you.

And I am not outraged or angry at the Guru who exploits them, either.  If one Guru didn't do this, another one would take his place.