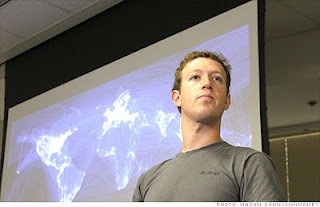 
Menlo Park California, July 27, 2012 -  In a surprise move today, Facebook founder Mark Zuckerberg broke down during a press conference and admitted he was a complete and utter fraud.

The press conference had started out well, with various officers of the company making optimistic projections for the future, in spite of the staggering loss last quarter, mostly due to the founders' selling off massive amounts of of insider stock during the ill-fated IPO.   While the insiders of the company cashed out, it was at the expense of the remaining shareholders and company profits.

Facebook had reported a $157 Million loss on payments to shareholders, including chief executive Mark Zuckerberg, in its first results since its eagerly-anticipated stock market listing in May.

The loss was mainly due to one-off expenses associated with its flotation.  Excluding staff share schemes, Facebook would have made a profit of $295 Million.  However, news about slowing growth also caused the share price to tumble.

Officers of the company were upbeat, however, pointing to new trends in advertising revenue and in the expanding market for mobile devices.

Zuckerberg then took the stage to address the audience about this new growth market.

"Our goal is to help every person stay connected and every product they use be a great social experience," Zuckerberg said, "That's why we're so focused on investing in our priorities of mobile, platform and social ads to help people have these experiences with their friends."

He then sighed heavily and then said:

"Oh, fuck it. I can't keep saying this shit with a straight face. I have no clue why people find Farmville endlessly fascinating or why they feel the need to obsess about people they met in high school. At this point, I just do what my wife tells me to do, and that is to cash out as much as possible before it all goes horribly wrong!"

The press conference then took a bizarre turn, as he put his head in his hands and started weeping profusely.  "I'm such a fucking fraud!" he whimpered, "I mean, its not like I invented social networking or anything!  I just really got really fucking lucky!  And now everyone thinks I am a boy-genius with some sort of 'insight' into the Internet!"

Company officers tried to lead Zuckerberg off stage, but he brushed them away.  Wiping tears from his eyes, he offered a heartfelt apology to shareholders and users of what he called, "the biggest time-waster of the Internet".    "Hell," he continued, "I don't even use it anymore.  I'm on Twitter!"

When asked what his next plans were, Zuckerberg indicated that, since he was apparently blessed with massive amounts of dumb luck, he would use the remainder of his fortune to buy lottery tickets.  "Lots and lots of lottery tickets," he mused.