NOTE: I wrote this a few weeks ago, and hesitated to post it, as it seems no one READS anything anymore, but rather reads the headline and then goes off on a rant. This is not an attack on the Police in general (although, like anything else, there are a few bad ones). Rather, it is an honest assessment of what Police work entails and how, in many cases, they simply cannot solve crimes, because of the raw Physics of the thing. A good portion of murders are never solved, and most lesser crimes never are as well. Relying on 911 to protect you might be a false sense of security. However, I am not sure what the answer is. Arming yourself to the teeth has its own problems.
READ IT ALL before commenting or Flaming! 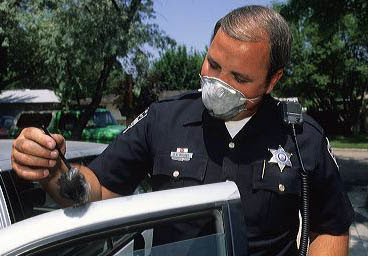 In the mythology of television, Police Officers are even more saintly than Teachers.  According to their respective unions, they are all Gods who should be paid highly.  Unfortunately, the Police are of little use to the average citizen in preventing crime from occurring.  You are more likely to be hassled by the Police than helped by them.

In a previous posting, I mentioned offhand that you should not rely on the Police for help.  This is not a slam on individual cops, or even the Police as a group.  It is only a basic observation that the Police can only Police law-abiding citizens.  They can do little to deter real crime, other than to file reports.

As a tax-paying citizen with a fixed address, a car, a driver's license, and presumably some assets, the Police can come after you, for even the smallest of infractions.   They can pull you over for speeding and give you a ticket, and you have to pay it, because you are an upstanding citizen with a home address.  If you don't pay the ticket, they know where to find you.

On the other hand, the fellow who has three DUIs, who kills a busload of nuns while driving a stolen car with a suspended license - they never seem to be able to stop that guy, do they?   He goes to jail, gets out, and does it all over again - and again - and again.   We shake our heads in disbelief, and then throw some secretary on her way home from the Office Christmas Party in Jail for a 0.08 BAC, as if she is a threat to humanity.  Of course, she loses her license, her job, her car, and her livelihood.  You can go after a citizen, you can't touch the outlaws.  So they go after citizens.

So, you probably live in fear of the Police - as you should, if you've ever studied Criminal Law.  As my old Crim Law Professor used to say (Professor Starrs), the Police can beat the living shit out of you, and there is not much you can do about it, sometimes even if it is caught on video.   They will claim you "resisted arrest" and a jury of retired old ladies will look at you with bruises all over your face and figure a rapscallion like you had it coming.

But if a real criminal invades your home, assaults you, and steals all your crap, what will the Police do?  Not much.  By the time you call 911, the culprit is long gone.  When they do arrive, maybe a half-hour later, they will look bored and take a report, and admit, honestly, that there is not much they can do to help you.  Having your stuff stolen is a property crime and they really don't give a rat's ass about that.

And of course, they have no way of tracking down the crook - he is long gone, and so is your stuff.  Tough shit.  They will take a Police Report for you, so you might be able to file an insurance claim.  That's about it.

And they might actually lecture you about how you had it coming.  I kid you not.

Meanwhile, you go to the pawn shop and see your stolen shit for sale.  You call the Police, and by the time they get there, it has disappeared.  You'd think they'd check pawn shops, daily.  You know?  Seems like a simple thing.  But they don't.

Recently, we had a rash of car break-ins in tourist areas.  A parking lot by the beach, for example, is a prime target.  People park next to the Lanier Bridge to walk across it - and their cars get broken into.  And if this happens to you, the Police won't say, "Gee, maybe we should watch this lot and see who is breaking into cars?  After all, this is the tenth time this month!"  No, they will basically insinuate you are a fool for parking there and you "tempted" the thief by leaving stuff in your car.

Which is why I say, own less stuff - it really is the only workable solution.  And of course, don't leave stuff in your car, as it basically belongs to the thieves at that point, and a new car window will cost more than your stuff, anyway.

Even if you are murdered or assaulted, the Police will do little other than to tag your body or take a report.  It is a little-known statistic, but 1/3 of all murders go unsolved.  The other 2/3 were committed by friends or family members, or by the person caught standing over your body with the smoking gun.   It is only on television that the "CSI" people go all forensic on things and gather tiny hairs and fibers and "catch the killer".

If you are gunned down by a stranger in a mugging, chances are, he will never be caught for your murder.  And that is not because the Police are stupid or incompetent, but because of the basic facts of life - if no one sees it happen, there is no way to catch the criminal.   It's not like on TeeVee.

With lesser crimes, the unsolved rate is even higher - and this is a statistic not talked about very much or very easy to find, for obvious reasons.  Criminals would be emboldened if they knew what the real odds are.

For example, in Boise Idaho, 79% of all reported crimes are unsolved.  I don't think the Police in Boise are particularly incompetent or their crime rate unusual.   It is just the nature of the beast.  You show up at a vandalized church, take a report, and the kids who did the deed are lounging across the street, snickering at you and calling you "Pig".   Unless someone saw them do it, there is no way to convict them.

Of course, most criminals commit a series of crimes, not just one.  So they are eventually caught, if they continue down this path.   This is why, when I hear some teenager whine about being caught for shoplifting, I can assume that it was not their first time - only the first time they were caught.

Unless they see the crime being committed, there is not much the Police can do.  This forensic evidence thing is a fantasy on television, and even if true, is beyond the budgets of most local Police Departments.

So, even if a Cop is hard-working, honest and decent, there is not a lot they can do to solve a crime, once it has been committed.  And yes, there are a lot of hard-working and decent Cops out there.  Some even give their lives in the line of duty.

But, on the other hand, being a Policeman is not the most dangerous job out there although it is usually #10.  I know people who have been killed in industrial accidents, and yet no one mourns them for "dying in the line of duty, trying to restore your electrical power!" No one names a roadway after the guy delivering your UPS package or taking out your trash - but both are more likely to be killed "in the line of duty" as a cop - and usually in the same way - being hit by a car.

And what about the other Cops?  Well, act shocked, but some of them are real maladjusted assholes, who really get off on being a Cop and hassling people.   They have a lot of power over you, Police Power and it can be used - and abused - without fear of retribution.

And I have seen this firsthand.  I was given a speeding ticket once, and the cop said it "looked like You were going fast" but he did not have his radar on, so he wasn't sure.  I was, in fact, doing the speed limit, but accelerating rapidly from an on-ramp to merge into traffic.  When I got to court, I discovered he had signed a sworn affidavit and had lied under oath that his radar set was on.   When I pointed out to the prosecuting attorney that his copy of the ticket had "radar" written on in a different colored ink and my carbon copy was blank, the charges were quickly reduced to a small fine.

A cop will lie under oath to make a lousy speeding ticket.  Imagine what they would do when the stakes are higher - and you are the defendant.

And that is the really sad part of the deal.  While the Police rarely catch people who commit anonymous crimes, in many cases, we are finding out, they are catching and convicting the wrong people for the crime.  DNA evidence is not so much solving crimes these days (as it does on TeeVee) but exonerating those wrongly convicted.

So what does this mean to you?  Well, if you are an ordinary citizen, it pays not to speed, roll stop signs, or drive after drinking.   They can catch you and make your life miserable.  If you are a citizen, make sure you never break the law because they can catch you, and in fact, citizens are the only ones they set out to catch, in most cases.

It also means that if you live in a bad neighborhood, your house and car are going to be broken into and your stuff stolen, and the Police can and will do nothing about it.   Crime rates are more of a function of the underlying society than Police work, in many cases.  When the economy improves, crime goes down, and vice versa.

And if you live in a better area, the odds of being a victim of crime are far less.   It is a better idea to have a small house in a rich part of town than a mansion in the ghetto.  Get out of this idea of "having more stuff" by living in a crappy neighborhood.   You are not coming out ahead.

And if you are a victim of a crime, go ahead and call the Police - your insurance company may require you to do so.  But don't act surprised if a bored officer shows up and takes a report and nothing ever comes of it.  Because statistically, nothing ever does.

The Police are not Super-men.  They are not the Gods we see on the TeeVee, who solve mysterious crimes every 22 minutes.  They are just people like you and me, and they do the best they can, but really can't accomplish much, because that is the nature of the beast.
Newer Post Older Post Home