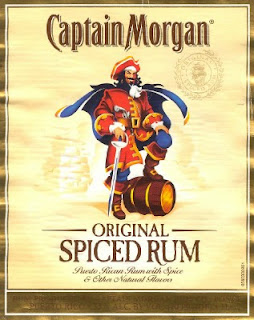 My brother started drinking this shit when he was 16.  The "spice" is sugar, to make it appealing to kids, who like sweet drinks.  The tendency toward savory does not develop in many people until later in life.  For many, it never develops, particularly today.


You can sell young people anything.  Put shit on a stick and tell them it is trendy, and they will line up to buy it.  So you can sell them crappy cars, and shitty booze, and really poorly made t-shirts with the name of your company in foot-high letters, and they will thank you for selling it to them, as they blubberingly hand over their hard-earned cash - and beg you for more crap.

The booze biz is particularly problematic, as of course, our drinking age in America is now 21, and the liquor industry doesn't want to fall into the trap that the cigarette industry did, by using cartoon camels to sell ciggys to kids in Junior High.

But marketers know that "brand loyalty" (which is idiocy to the nth degree, in this day and age of corporate takeovers) sets in early.  And if you can snag some youth as a "Chevy Man" who smokes Camels and drinks a certain brand of lite beer - at age 16 - you can expect these consumption patterns to continue for another 20 years, at the very least, if not for life.

Marketing is a powerful hook, and the plebes bite on it with glee.

Since I was a kid, they have been marketing booze to kids in various forms.  When I say kids, the main market is the 20-something set, which they hope to entice by getting them to believe that ordering a particular drink at the 20-something singles bar will mark you as hip and sophisticated, even if any adults in earshot would cringe to hear it.  But they also want to at least raise brand awareness among the younger crowd, who often look to their immediate elders for normative cues about consumption and behavior.  Older siblings in particular, can be a profound influence.

So they want to convince young people that it is sophisticated and cool to order a brand of whiskey or aperitif, at the singles bar - which is plastered with signs with the logo of the same booze, promoting the night's band, and also has several light-up signs with the name of the booze, just to make sure you didn't miss the point.

Take a fairly recent example, which is starting to fall from favor - Jägermeister.   Ten years ago, this spirit didn't exist in the marketplace - at least in the United States.  But then you started to see promotions and ads for it - usually in youth-oriented venues, such as the "alternative paper" (or as we call it, "the dirty paper") with ads for local bars and local bands  Jägermeister became popular through promotion by Sidney Frank and through its association with heavy metal bands.  Needless to say, its popularity took off after that.

They have promotional events, with free hats and shirts being handed out (sort of like how energy drink companies hand out swag).  You see an article in the paper or a interview with a celebrity on television, where the product name is mentioned casually.  It is mentioned in the lyrics of a rock song ("Someone do me a favor and pass me the Jäger. I'll grab my guitar and play") - of course, just by coincidence, right?

Pretty soon, you have a huge youth marketing phenomenon on your hands.  And celebrity promotions and "product placements" are nothing new in this business.

For example, Danny DeVito showed up on the View (and a late night program, as well, as I recall) appearing to be drunk and blaming it all on a new sugary-sweet liquor, Limoncello.  Since this obvious product placement, he has gone full-bore as an "outed" spokesman for the product.  Nothing happens by accident in the media.   If a celebrity mentions a product by name, money has changed hands.  Assume that.

Product endorsement by celebrities is key, as the kids want normative cues as to what to order at a bar.  After all, there are so many choices!  And one does not want to appear to be unsophisticated by ordering the wrong thing!

But of course, the joke is, at kids bars, they only sell two brands of lite beer, and make the same five cocktails (if that).  If you ask for a Martini, they will ask you what kind - Apple or Lemon drop?

Ugh.  I am going into diabetic shock even thinking about it.

So your choice made of your own free will, is, of course, a choice you have been carefully coached into.  And singles bars frequented by young people do bear more than a passing resemblance to a slaughter house, where the cows are led up the chute one at a time, to the captured-bolt gun and the abattoir.  Avoid such places.

How do you spot a liquor product that is being marketed to the young set?  It is not hard to do.


Some common denominators include:

1.  Never heard of it before, but it touts a "heritage" of Centuries.  It is made from an old-world process, perhaps by Monks.  No, on second thought, Monks sounds too Gay.  But the label is ornate and looks old-fashioned-y.  Give it some sort of elaborate back-story.  But no Gay Monks or anything.

2.  Suddenly appears on the market, along with a huge advertising campaign, with trendy-looking young folks enjoying it.

4.  You never see it drunk by older folks or appearing on the menu of a serious restaurant.

5.  Cartoon characters and/or tag lines used to advertise it.


Some Examples of the Products Pushed:

Captain Morgan's Spiced Rum: The "spice" is sugar, and plenty of it. Kids like it. It is not a real rum, and don't use it when making a real rum drink.

Southern Comfort: popular in High School circa 1976. A very sweet bourbon-like drink that is appealing to kids. It is not really bourbon, though, in the Maker's Mark sense.

Boone's Farm Strawberry Hill Wine: Girls in High School loved this. When they puked, though, it looked like they were barfing blood.

Reunite Wines ("Reunite on Ice"): a popular sweet wine when I was in college. Sweeter than Hawaiian Punch. Not really a wine, per se.

Heublin's Cows: a milkshake like drink from the 1970's that was widely criticized as being targeted toward underage drinkers. It tasted like a McDonald's milkshake.

Jagermeister: started being popular about 5-10 years ago, seems to be fading as of late.

Goldschläger Gold Liquor: Popular just before the Jagermeister crap became popular. Maybe the price of gold has driven it off the market.

Jameson Irish Whiskey: hyped like snot on The Daily Show and other youth-oriented outlets. Never heard of it until recently. Plugged by one of the characters on the wire. Has a cartoon-like character who performs super-human manly feats and always wins the woman. Not subtle!

Wine Coolers, Segrams Ice: Drinks that are not quite beer, not quite wine, just a lot of sweet to disguise the taste of alcohol. Remember Bartles & Jaymes? It was actually a division of Gallo.

Hpnotiq: a wine-cooler thing that comes in neon colors and tastes like Fresca.  Aimed at girly-girls who have curly-Q initials on the back of their SUVs, in pink, of course.

Note the common denominator is SUGAR and a LOTS OF IT.   Kids want sweet, not savory, and it takes a long time to develop a taste for Scotch or Bourbon.   With beers, kids like sweet "lite" beers and not stouts, porters, or other more challenging beers.  In the wine department, sweet wines like White Zinfandel (but not old-vine Zinfandel) trump drier wines.   Sweeter Chardonnays, Rieslings, and Moscatos prevail.  In the sparkling department?  Cold Duck or something pink and sweet for the girls.   I get a headache just thinking of it.

So what is the point of this?  Maybe you like one or more of these drinks?  Or maybe you just think you do, but are in reality, just responding to saturation marketing?  It is always a good idea to realize when you are being marketed to - and when you have responded to it.

The downside to these sort of marketed liquors is twofold.   First, by centering on "one thing" you are taking a pass on a wide variety of things to drink out there, most of which are far better than these syrupy sweet crapola that that pawn off on kids.  And if you center on one brand for a decade or more, you are missing out on a lot.

Second is the over-consumption aspect.  Often these drinks are marketed as something to consume to excess, as Danny DiVito's carefully staged "drunken" appearances attest to.  Since the drinking age was raised to 21, a whole generation is graduating from high school without ever having vomited their guts out and promising, dear God, never, ever to drink again.  For them, this is a college experience, with predictable results.

Of course, adults are targeted too - on a big scale.  On a blogsite during the last election, I criticized the makers of Maker's Mark bourbon, as they hosted an event, free of charge for then-candidate Hillary Clinton.  I opined that this was an unfair corporate political contribution (which today, would be legal, ironically enough).  I jokingly recommended that everyone boycott Maker's Mark.

Well, as I noted before, most companies groom their image on the internet, and the phrase "boycott Maker's Mark" must have set off alarm bells with the the company they hired to groom their image.

I got a response from the owner of the company, no less, offering to host an event from Obama.   Of course, the Primary was over by then, so it was sort of a pointless gesture.

I somehow got my name on their mailing list as a "Maker's Mark Ambassador" and the swag started piling in.  Every Christmas, they send me a gift (and I never send anyone a gift!).   Last year, it was a little hand-knit sweater, or as the Brits call it, a "Reindeer Jumper" that fit over the bottle.  Before that, it was something called "Bourbon Balls" (don't ask) and of course coasters, swizzle sticks, and the whole lot.

I gave in.  I called the boycott off.  And I'm not even a bourbon drinker (although I'm not shy about a well-shaken Manhattan).  Does this mean we are loyal customers of Maker's Mark?  Well, lately, I've seen Mark refilling the Maker's Mark bottle with the cheaper stuff (Evan Williams).   Shhhhh!  Don't tell!

So, they come after all of us - the marketers - getting us to identify with a brand as being "friendly" so that we will not try other brands - particularly brands that might be cheaper in price.   If they can snag you this way, they have you - as a customer for life.

And the target audience for this sort of thing is young males, aged 16-36.  You can sell them anything it seems.  Even crappy booze.  Particularly crappy booze.  And you can lock them into one mode of behavior for decades, this way.
Newer Post Older Post Home