Would I Invest in Real Estate Today? 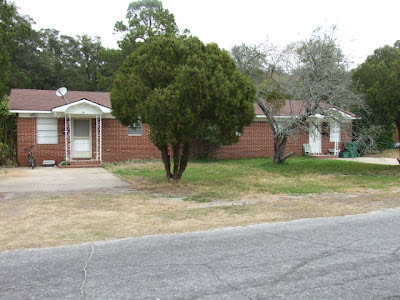 Would I invest in Real Estate today?  Well, I'm not jumping in just yet.

UPDATE:  I revised this analysis as I realized I miscalculated the rental income by cutting it in half ($6,000 a side, seasonally, as opposed to $3000 a side).  At this rate, it may be more of a favorable deal, but with the rehabilitation costs, likely still a negative cash-flow proposition.  Since I wrote this piece the owner has taken the home off the market and is renting it for $700 a side, full time.  No imagination!  At those rental rates, the property is worth even less.

I made a lot of money in Real Estate.  But that was back when it was cheap and rents were high and it was a real no-brainer.  Are we getting back to this era again?  Maybe.  It depends on your location.

Renting in Northern Virginia to Government employees was a real no-brainer.  They had steady paychecks, high educational levels, and were good tenants.   Where I live today is a different deal.  The properties in Brunswick, Georgia can best be described as "distressed" and if it isn't section-8 tenants, it is good 'ole boys who think it is a patriotic duty to stiff a Yankee for the rent.

Not with a ten-foot pole, thank you.

But I did have good luck renting condos in Florida seasonally and I think there are opportunities here, at the right prices.

The problem is, there are two local Real Estate agencies on the island, and both suffer from poverty of the spirit as they see only what was and not what can be.   So, for example, the above duplex languishes on the market for $239,000.  It is not in a great neighborhood, as many of the duplexes are owned by the Real Estate agencies, and they rent them out, full-time, for $700 a month or so.

On the other hand, Canadians and snow birds would pay $1500 a month to rent from December through April, and be a lot less wear and tear on the property.  In the remaining months, you could get $300 to $400 a week to rent the place to vacationers.  Even $200 a week beats the snot out of $700 a month.  But then again, these same agencies don't want competition with their own listings, so maybe that is why they keep these units as full-time rentals.

But let's do the math on this.   Could this unit be bought, fixed up and rented out for a profit?  To begin with, I would not use the island agencies to rent it out.  Not only do they demand too much money to do this, you would be competing with their own properties.   Where is their incentive to push your property?   And as one homeowner told me, they tend to under-rent places, not realizing that winter folks will pay more, for a shorter stay.

We had great luck with VRBO in renting to Canadians.  And I would use this to rent directly myself, cutting out the middleman.  It also allows you to select your tenants and interface directly with them.

So let's assume we can make $1500 a month in rent from December through March.   This may be a bold assumption, as many folks prefer just January through March.  For four months, that would yield $6,000 a year per side, or a total of $12,000.


Property taxes are probably about $1500 a year for this property.   Utilities would likely have to be paid by the landlord, if you are renting it out as a seasonal rental.  Factor in $2400 a year for electric, and another $1200 for water, sewer, trash.  Add $500 for fire fee and another $800 for the lot lease.

So far, we have expenses of $6500 without taking into account the mortgage.

We also have a bed tax or rental license.  The license is $20 a year (per side, or $40) and a percentage of rents.  There also appears to be a bed tax, but I will have to research this further as the actual amounts do not appear anywhere online.  For initial rough calculations, let's assume 10% of revenue overall, or about $2,040 a year.

So, what does this give us?

Again, this is a rough estimate, and a final calculation would include the actual bed tax, the cost of running the VRBO ads, etc.  You have to figure it out down to the penny, as even a $20 fee here and there can add up.  Look at actual utility bills, actual real estate taxes (and count on an increase) the actual lot lease amount.  Even the cost of cable or satellite television (seasonal tenants will expect WiFi and Cable).

(Note:  Even if I was to pay cash for the property, the analysis would still be about the same.  Unless I could make some money on this deal, parking $239,000 of my money here would likely be a bad bet.  And no, I am not cashing in my 401(k) to do something silly like this).

And here, I have probably under-estimated many of the costs, such as the bed tax and licensing fees, as well as cable and modem ($1200 a year, right there!).

You can see why the property remains unsold - the local Bubbas who own the local Real Estate agencies would have jumped on it, if they could have rented it for a positive cash-flow.   And at their rates of $700 a side, clearly $239,000 isn't in the cards.

Compounding this, the property is in sad shape and would likely need an overhaul - new bath and kitchen, perhaps new A/C units, some yardwork, new windows, etc.   To make it attractive to vacationers, particularly snowbirds, you might want to add a screened porch.  Even doing a lot of this work yourself, and it is a LOT OF WORK, you are looking at $50,000 in materials, and that is using home depot generic cabinets and the like.

And that was without calculating anything out.   It is funny, but you get a "feel" for this sort of thing after a while.

Now to be sure, there are some other factors to consider.  I could depreciate the property on my taxes and thus reduce my tax burden.  At 10% a year this would knock $20,000 off my income, which would reduce my Federal taxes from $5500 to essentially zero.  Since I am in the 15% bracket (poverty has its virtues) instead of the 28%, the net advantage is a lot less.

In other words, this was a more lucrative gig when I was making $100,000 a year than when making $50,000 a year.  And if the Capital Gains "recapture" is at 25%, then it might not make any sense to take the deduction at all at this stage in the game.

So, what do we learn?  If I could talk the owner into lowering the price by $40,000, I might be able to re-hab the property and rent it out seasonally and basically break even, at least initially.   This would assume a number of risks - that I could rent the place at the vacancy rates postulated and at the rates postulated.  That my re-hab could be brought in for under budget.  That tenants did not damage the property too much (this is Georgia, they will damage the property, particularly the summer people) and that unexpected repairs (not factored in, in this rough analysis) are not too excessive.

I am also taking a risk that property values will increase over time (breaking even on this deal, I can only hope to make something on Capital Gains!).

All that risk, all that manual labor - plus the hassles of self-renting the place - and for what?  To possibly make 2-3% annual appreciation?  That works out to about $3000 to $4500 a year - maybe - to compensate me for all that work.

And if that was possible, the local Bubbas would have bought it already!

The point of this post is not to say that investing in Real Estate is a bad idea.  No, the point is to "do the math" and add up all the costs you can think of and then figure out what is a good price for the property, and whether you would make money at it.

The problem we had, in the last decade, was that people didn't do this math, and instead blindly assumed that buying any piece of Real Estate was a good investment, as it would "go up in value" indefinitely.

That turned out to be a wrong assumption.