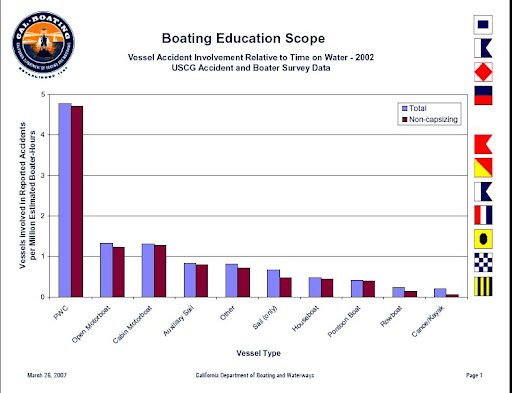 The Jet Ski Industry would rather you did not see this chart.


I pick on Jet Skis as the epitome of a really stupid purchase.   But in addition to being a horrible waste of money, they are also horrifically unsafe as well.  And like moped rentals, jet ski rentals are arguably twice as unsafe, as someone renting a jet ski doesn't realize the Achilles heel of these things - they have no rudder.

Yes, you read that right - they have no rudder.  The one thing every other type of boat in the world has in common, from the smallest sail boat to the largest aircraft carrier is that they all have rudders.  And without a rudder, a boat is out of control.   The mighty battleship Bismark was pounded by guns of the British Navy for days, but it was only when a tiny frail biplane managed to take out its rudder with a torpedo, that the ship was doomed.

Without a rudder, you are screwed.

Jet-powered watercraft, such as Jet Skis and Jet Boats, use a jet of high-pressure water to propel them through the water, and to steer, using vectored thrust.  The problem with this type of control system is that in order to steer effectively, the throttle has to be open, with the engine pumping water and generating thrust.

For many people, particularly amateurs, the normal instinct, when an emergency occurs, is to let up on the throttle, in an attempt to slow down.  And that is the second problem with Jet Skis.  Since they are very lightweight and skim across the surface of the water at very high speeds, they do not slow down very quickly.   A regular boat, when you let up on the throttle, quickly settles into the water and the drag slows down the boat.  And if that isn't enough, you can put it in reverse.

Not a jet ski.  It keeps skimming.

And since the operator has let up on the throttle, there is no thrust, and hence no steering.

So, in a very typical jet ski accident, the operator appears to head right toward another boat, or a dock, or a swimmer, or some other hazard, and then plows right into it.  They do not appear to slow down or take evasive action.  They panic, let up on the throttle, and then try to steer, and too late, realize that they have no steering.

And when a Jet Ski collides with another object, the driver usually is thrown forward, and then hits the object with their head, causing a massive brain injury.  It is like riding a motorcycle with no helmet, no brakes, and, in an emergency, no steering.

In other cases, it is bystanders who are not so lucky - swimmers run over, or other jet skiiers who are hit by their own friends or family members, usually with fatal results.

You can Google "Jet Ski Accident" and see a lot of hits.  But the Jet Ski industry is doing a good job of sanitizing its image online.   Go on to YouTube, and google "Jet Ski Accident" and you will see endless funny videos of Jet Ski "accidents" such a couple turning over at a ridiculously low speed.  But for some reason, the gory and fatal accidents that used to be on there, are mysteriously missing (UPDATE:  I see Google is resisting the attempts of the PWC industry to groom its image online and more gory Jet Ski accidents are now visible).

Smiling summer fun quickly turns to tragedy.  Note that I keep having to update this blog posting, as these videos are routinely scrubbed from YouTube.  Someone is grooming their image here - the Jet Ski industry?

Or look at Wikipedia, and see how the industry has "sanitized" the page - making the numerous accidents all seem like idiotic "operator error" or drunk boater cases, all while lauding Jet Skis as easy to afford, drive and own - and of course, FUN!   This bastardized wiki page has the balls to suggest that Jet Skis are safer than boats as they don't have that pesky propeller, and thus are safer for swimmers.   Unfortunately, when you are run over by a Jet Ski, your head smacks the fiberglass underside and you die of the head injury, propeller or not.

But just in the last few months, there have been a number of high-profile deaths on Jet Skis.  For example, a former Astronaut was recently killed in a jet ski accident when he was hit by his own son.  On Lake Lanier, a rap star's son was run over and killed by a Jet Skiier.  And the list of hits goes on and on.

Most of these accidents are private tragedies, played out in the local news, perhaps garnering a few minutes of airtime and a paragraph in the paper.   And we move on with life.  But a fun day at the lake went from barrels of laughs to a horrific fright movie in a matter of seconds.  Only, unlike a fright movie, the blood is real, and the people dying in front of your eyes are your friends and family members.  And you will live with this horror for the rest of your life - if you are lucky enough to survive.

And all for what?  So you can drive in circles?   Riding a Jet Ski is about as amusing as mowing the lawn.

The Industry would argue that the sheer popularity of Jet Skiis is why there are more and more Jet Ski Accidents.  But others differ.  While they have increased in popularity over time, their accident rate is easily double that of other boating types.   In some states, as much as tens times more.   And others have noted that the basic design is flawed, in that when you let up on the throttle, well, they just keep going in whatever direction they are pointed in.

So who is selling these things?  Oh, big surprise here - the same folks who are selling 150 mph "crotch rocket" motorcycles to 19-year-olds.   The Japanese are having their revenge, it seems, for WW II.  But what did we ever do to piss off the Canadians?

And of course, others will argue that, like any other product, if you are a skilled user and know how to use one properly, a jet ski can be safely used.   And perhaps there is a nugget of truth in that.  But tell that to the swimmer who is run over by a Jet Ski.  Just because you are not riding one does not mean your are safe.

Real boaters, of course, hate Jet Skis.  They are a nuisance and it is often only because boaters take evasive actions that there are not more accidents.  Many Jet Skiiers like to ride your wake, which I guess might be fun and all.   But if a large boat slows suddenly, it will settle into the water quickly and stop.  A fast-moving Jet Ski can slam into the back of such a boat, killing the people inside.  This is why, when you ride a boater's wake with your jet ski, they often are not amused.

And as I noted before in my earlier posting on the subject, Jet Skis are anything but cheap these days.  For the cost of a pair of jet skis and a trailer, you can buy a nice sized boat that will haul the entire family.   No, you can't "jump the wake" with it, but you aren't six years old, for chrissakes.  Grow up.

Of course, a motorboat can be operated in an unsafe manner.  And since motorboats outnumber jet skis (and hold more people) they still top the list in terms of accidents and deaths (mostly due to drowning).  But again, in terms of accident rate versus percentage of the boating fleet, Jet Skis seem to be inordinately represented in accident statistics, as shown by the graph above.

Can a Jet Ski be operated safely?  Perhaps - if you operate far away from shore, obstructions, swimmers, boats, and other jet skis.   But of course, you rarely see anyone do that in real life, as the Jet Skiier is mostly interested in "showing off" by doing rather lame and inane stunts. 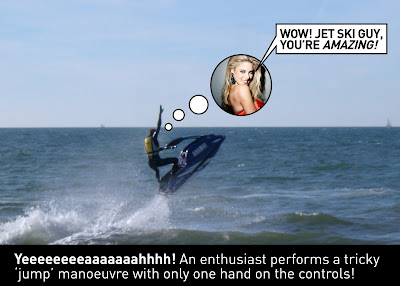 And that about sums up the problem with Jet Skis.  The kind of people who think they are interesting are, well, idiots.
Newer Post Older Post Home