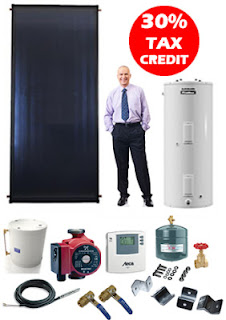 Solar powered hot water heaters are an interesting option.  But do they make sense financially?
As I wrote in "Should You Unplug From the Grid" (and Part Deux) the idea of using solar or wind power for your home is an attractive fantasy.   But it is a fantasy for most of us - and not a very cost-effective one, at that.

I recently researched this, online, and was shocked at how much these systems cost - and how complex they are to install and maintain.   For the thousands of dollars involved, and the effort, the payback is somewhat limited - and could take years to realize.   By the time you pay back the cost of one of these systems, you might be ready for a new one.

A good business for the manufacturer and installer.  Maybe less a bargain for the homeowner.

What are the pros and cons of these systems?  Mostly cons, I'm afraid:


Tax Incentives: yes, there are tax incentives.   But the manufacturers and installers of these systems know that, and raise prices accordingly.  As a result, they are staggeringly expensive, as you buy them on the premise that the gub-ment is paying the tab.

Complexity: Simplicity often works best in the long run.   Like a hydronic heating system in miniature, a solar powered hot water heater has a pump, plumbing, a controller, and a tank and expansion tank.   All of these elements wear out over time or require periodic maintenance and adjustment.

Costs: Staggering.  A simple electric hot water heater can be had for under $500 an installed by yourself in half a day.   A solar system can cost ten times this much and require professional installation.  The kit above retails for $3999, and that is installing it yourself, which can be a daunting task.   You'd better know how to sweat copper, be comfortable with drilling holes in your roof, and also know how to do basic wiring, too.

A professionally installed system?  You should expect to at least double that amount.  You are looking at $8000 or more to have one put in.

Drilling holes in the roof:  Adding holes to the roof is never a good idea, but you will need two large ones for the pipes, as well as some lag-screws to hold the panel.   These are potential leakage sources, over time.

Re-roofing your house:  When the time come for a new roof, you will have to remove the panel and re-install it, adding to your roofing costs.

Limb Damage:  Every time the wind picks up, a Georgia pine drops a limb on our house.  Sometimes this sounds like a body has landed up there.   Some of these panels are evacuated glass and would shatter to pieces.  Homeowners insurance would cover only part of the repair costs.  In our case, with $10,000 deductible, none.

Appearance:  Well, they do look like hell, don't they?  Of course, they do tell the world you are environmentally conscious, right?

Payback:  Well, the proof is in the pudding, right?  What is the payback on this?  Or is there one at all?

If you sell your house in five years, you may never see the payback from this.  And the new owner might not see solar hot water as adding anything to the value of the house.  While a hot water heater may draw a lot of current, it is pretty small compared to your air conditioner.   Our electric bill can top $400 a month in July, but be as little as $89 in the Fall, when the A/C is off.  How much of that $89 is our hot water heater?  Hard to tell.

For a professionally installed unit, costing $8000, well, we'd better save $44 a month on electricity - just to break even.

And here's the deal - breaking even is not some special treat.   To make this worthwhile, you would have to show a profit over time - and fairly soon, too.   Dealing with the hassle of installation and maintenance should pay back not merely break even.

But what about with the tax breaks?  Well, you can get a 30% credit from Uncle Sam.  This could lower the cost of our "kit" to about $15 a month, over 15 years.   Presumably, at that rate, we could show a payback, over time, say, if we saved $30 a month in electricity.

Our current hot water heater says, according to the EnergyStar label, that it uses $410 of electricity a year.   And bear in mind this does not go down to ZERO with solar - you still need an electric hot water heater for backup when the sun isn't shining or at night.

So the payback?  Well, if we run this thing for 15 years, which is about the service life of the pumps and controls (based on typical design life, and my experience with hydronic heating, and yes that is the same damn type of pump that I had to replace in that system) we see a payback, after 15 years, of $3680.70 - or about $20 a month.

Um, this is not a really good deal.  And that is being generous - assuming a really cheap system, self-installed, and rosy scenarios with regard to electricity savings.

So, one of two things.  First, you would have to get the cost down by a lot, to make this attractive.  A $1000 system, maybe.  $3000?  Even with a tax credit, the better investment is a mutual fund.   Second, the hassle factor is immense, and not enough, in my opinion, to warrant the rate of return even if the thing were $1000.

I will keep researching this.  They do make flexible pool heaters that use a flexible plastic tubing mat that is easy to install and is freeze resistant.   But for some reason, these are not widely used for domestic hot water.  Such a system might not need a pump and expansion tank, if it just used city water pressure to circulate the hot water.