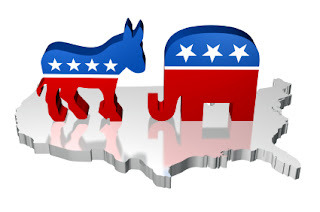 The GOP is a fractured party of disparate interests.  What about the Democrats?
As I noted in a previous posting, there is little point in being a political junkie.  And in my last posting, I opined that pledging allegiance to a particular political party makes no sense at all.  In that posting, I pointed out that the GOP is a creaky amalgamation of disparate groups - everyone from Bible-thumpers, to gun-nuts, to big business, to tax-cutters for the wealthy, to small government fiends, to balanced budget advocates, to immigrant-haters.

And by definition, each of these groups has interests that are divergent from the others.  The guy who wants "less regulation" runs smack into the fellow who wants everyone to register to prove their citizenship (and require employers to check).  The fellow who wants a smaller government and more freedom is opposed to the other fellow who wants the police to check everyone's bedroom for hanky-panky.

But what about the Democrats?   It is more of the same thing, just a different assortment of nuts.

Again, the Democracts morphed, over 100 years, from a party that supported Slavery to the party that supported the civil rights movement.  It is quite a startling change, just as the change of the GOP in the opposite direction was just as startling.   This alone should prove to you that party names are just that - and indicate nothing about underlying "fundamental core values" or "traditional values" of any party.

And this all has to be done using a variety of carefully crafted code-words and very strategic finessing.  So, for example, a Democratic candidate will pander to the far left, by saying things like "we should give every child born in America a Baby Bond!" - which appeals to the welfare mentality.  But then the next day, they can tone down these comments or call them a "trial balloon".

And the GOP does the same, pandering to the religious right on one day, and then waffling and qualifying their comments the next.  They want to get out the "base" but not alienate the center.

So who are the Democrats these days?   At one time, it was a very Schizophrenic party - with the Dixiecrat South and the labor unions of the North.  But that was in the 1960's - when the Republican Party had a "Liberal Wing" and New York was a Red State.   A lot has changed since then.

Today, it has a disparate base, but arguably one that is more cohesive than in years past.  But the elements of the party have interests that conflict with one another.   Unions are a big part of the Democratic base, but a more muted and less powerful component than in years' past.  And the party and its leaders have backed away from outwardly supporting unions, correctly gauging the mood of the nation still being against Unions and Organized Crime (I am being redundant, and yes, I was Teamster, so I know of what I speak).

For example, during the Wisconsin budget battle and recall vote, President Obama was nowhere to be seen.   Although the Unions identify with the Democratic Party and nominated a Democrat in an attempt to oust their Union-busting Republican Governor, the party really only made half-hearted efforts to support them.  And they lost.

The Democrats realized that there were more taxpayers than union members, and that the taxpayers see the correlation between fat salaries and bloated government budgets, and their $10,000 property-tax bills.  The "average working man" doesn't belong to a Union, and has little sympathy for strikers who walk out on $100,000-a-year jobs.

So, the Democrats make nice noises to the Unions, but don't do too much to appease them, although the recent change in Unionization voting (requiring a majority of those voting, not a majority of all workers) is a huge sop to the Unions in their organizing efforts.  And of course, the way the bankruptcy of GM and Chrysler was handled was more favorable to the Unions than Mitt Romney would have liked - he felt that the bond holders should have gotten a better deal!   There is some contrast there.

The Social Issues thing is also muted.   While clearly more toward the left, most Democrats went along with the "save marriage" act, and it was only recently that Obama "came out" in favor of Gay Marriage, and then only after careful calculation determined that it would not turn away any voters - other than those already decided not to vote for him.  Abortion is always on the radar of course, but even then, Democrats have pretty much muted this issue as well, realizing that there is nothing to be gained from raising it, other than to inspire the opposition to "get out the vote".   Ditto for gun control.

The GOP likes to paint Obama as pandering to Welfare Queens, and much of the "code words" in political speak are directed toward this issue.  We are told that a Romney budget will "cut out social spending" - which most people assume means welfare.   But in reality, this also means Social Security, Medicare, and Medicaid.

Many people are the left assumed that when Obama was elected, they would get a sop in terms of more welfare or free money programs.   A number of poor Black folks, interviewed on television, were convinced that "Obama is going to pay my mortgage!" once he was elected.   Of course, he wasn't, but do you think the Democrats went out of their way to relieve people of this misconception?  And of course, many of these folks fall victim to cons of one sort or another, where the "hook" is some spiel about how "Obama wants Moms to go back to school" or even "Obama will pay your utility bills!" - and of course, these all end badly for the victim.

The poor Black person in the ghetto who votes for Obama, convinced they are going to have their bills paid off, is no different than the poor white person in the trailer, convinced the GOP is going to cut his taxes (when he likely pays little or no taxes to begin with).   And each is hoping that "their" party will screw the other, too - as both are convinced their counterpart is getting a free ride somehow.

But who else is in the Democratic Party?   Well, there are Social-Issues liberals, which like their counterparts in the GOP are often willing to vote against their pocketbooks on social issues.   The vaunted "Limousine Liberal" has more to lose when the Bush Tax Cuts for the Very, Very Wealthy expire next year, as opposed to the fellow living in the trailer who always votes GOP.  Yet he votes against his pocketbook based on social issues, such as Gay Marriage, Abortion, Welfare, Prison reform, and Environmental Regulation.

But who makes up the bulk of the Democratic Party?  You can't win elections and the Senate based on Gay Marriage and Welfare, right?   Well, in this regard, the Democrats have done a better job of moving to the center in recent years than the GOP has.  Bill Clinton campaigned on a platform of economic reforms - and (gasp!) welfare reform.  And for the most part, he was able to accomplish much of this - and in retrospect was a fairly conservative President, or at least not the "wacky liberal" the GOP wants to paint him to be.

And that is the strategy the GOP uses with all Democratic candidates - the "L" word.   Every candidate is painted as "the most Liberal ever!" and if elected will get little Suzy an abortion and little Johnny Gay-married (and both on welfare, of course!).    And this is why, for the most part, the Democrats have been muted on gun control and unions, and until recently, very quiet on "don't ask, don't tell" and Gay marriage.

The big issue for the Democrats, of course, is the Affordable Healthcare Act, which the GOP calls "Obamacare" but folks in Massachusetts call "RomneyCare".   Again, this is more of a social issue at this point, not an economic or political one.   Campaign stump speeches notwithstanding, Mitt Romney could not overturn the Affordable Healthcare Act, even if elected.   It simply isn't physically possible, unless the GOP can win 60% of both houses of Congress, avoid a filibuster, and overturn the law and get it signed by the President (or overturn his veto).  Hey, I watched Schoolhouse Rock, didn't you?

But like the fellow living in the trailer waiting for his tax cut, most voters simply don't get that.  A shocking number of Americans think our President is like a King, and can pass laws at the drop of a hat.  Many people believe the President controls the price of gas!  I kid you not!  Democracy is bound to fail, under such circumstances.

And perhaps the Democrats have done their math here as well.  While the GOP has made a lot of noise about Obamacare, the Democrats know that - just as there are more taxpayer than union members in Wisconsin - there are more people struggling with healthcare issues and health insurance issues, than there are people who think they have a "right" to use the ER as their doctor and stiff the Hospital for the bill.

Anyone with a "pre-existing condition" that I have met is pretty optimistic about Obamacare.  And oddly enough, the insurance companies, doctors, and hospitals all seem to like it, too.   And even many employers, particularly larger corporations, like it, as forcing the uninsured to pay up will reduce their costs.  And by taking pre-exisitng conditions off the table, smaller companies can shop around for health insurance more easily, without sticking to their employees who happen to be sick.

The next election will be interesting.  The GOP may gain a number of seats in the house - and possibly lose the Senate - thanks to redistricting.   In individual districts, the GOP has been good at getting out the vote from its 'base'.   But overall, their more-fractured message doesn't seem to be resonating with voters.  If you look at the electoral college map, it tells a different story.  Romney will have to win nearly every toss-up State in order to win the election.  And the odds don't look good: