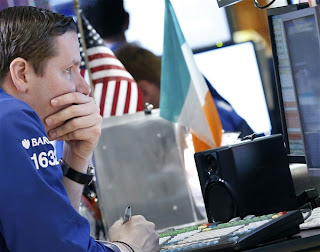 This stock guy looks worried about something!  OMG! The world is going to end!  Oh, wait, it is a stock photo.

On MSNBC this weekend, this story, accompanied by the worrisome photo above:

Stocks fell sharply Friday after dismal jobs data reinforced the view that the economy is stuck in a slow-growth rut.

The market saw its worst decline since June 21, knocking the Dow Jones industrial average down 124 points by the close of trading. The index fell as much as 194 points earlier in the session.

Stocks saw their worst weekly performance in over a month.

News that the world's largest economy created just 80,000 jobs in June -- far fewer than needed to lower the 8.2 percent unemployment rate -- added to evidence that Europe's debt crisis is weighing on global growth.

Let's look at this one thing at a time.  Were stocks "slammed" as the report claims?   Well, they fell 124 points, which at a level of 12,700 amounts to about 0.9%.   Yes, that is a lot in one day, but then again, we've had larger swings, in fact in recent weeks.  And in a normal market, you will see swings like this, usually in response to good and bad news.

Third thing to notice, "The index fell as much as 194 points earlier in the session."  What does that mean?   It means that at the end of the session, prices started going back up.   The DOW was increasing - by 70 points, by the end of the session.   The market digested the news, took a hit, and then started back up before the end of trading on Friday.   This is reported as bad news.  Funny how that works, eh?

As for the employment numbers, they are no big surprise to me.   Having lived through worse recessions, I realize that employment doesn't bounce back like a rubber band - and neither will housing prices.   People who expect that a major recession like this will just be "over" like a sudden Florida thunderstorm, are sadly mistaken.  It will be a few years before we recover fully, and whoever is President then, will claim credit for it.

In 1980 we saw 10% unemployment.  A lot of people got laid off, many were offered "early outs".  Factories closed and many never worked again.  I saw this happen to my Dad.

And when factories re-opened, or new factories or new jobs were created, a lot of the people laid off in 1980 were not rehired.  Why?  Often their jobs were obsolete, their job skills were obsolete, and their wage requirements were too high - and sea of young people were willing to work for less.

I hear sob stories from middle-management people who lost $100,000-a-year jobs doing stuff that really could have been handled by a website or an app.   Companies realize that they really don't need to rehire these people.   White collar workers in particular are being hit this time around - you don't need a $100,000 human resources manager when there are fewer human resources to manage.

It is like pruning a bush.   You don't try to glue the severed limbs back on - you wait for new ones to grow.

This is, of course, cold comfort to the fellow who lost his job.   But of course, he put away money for this inevitable conclusion, so he is all set for an early retirement.   Right?

Oh, he didn't.  He spent it all on leased cars and overpriced houses and credit card debt.   I see.  He is a victim here.   Obama has done him wrong.

Factory orders are edging up, as are orders for durable goods.   But of course, things are not rocketing back to pre-2007 levels.  Like with most recessions, we will ease back with slow growth, which can actually be a good thing.  After all, what did fast growth really do for us in the long run?  It got us here, is what it did.

But of course, MSNBC never analyzes things to that level.   They are not reporting the news, only keeping score at a football match.   And just reading score numbers and making alarming pronouncements rarely produces much insight into anything.

Our economy putters along - this is to be expected, and not alarmed about.   It will take years for employment and housing prices to get back to levels of 2007.   So get used to this.  Nothing any political candidate can do will accelerate the trend, period.

And no, vague promises of "fixing things" are not likely to work.
Newer Post Older Post Home