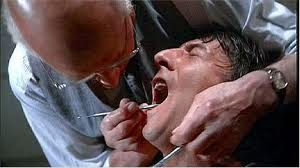 Finding a good Dentist is important.
On MSNBC today, this story about how poor people are overcharged by Aspen Dental.   People are outraged by this, but the problem is, there is no problem.   Aspen Dental has done nothing illegal.    They just charge high prices for their services, and in America, that is not against the law.  If it were, well, half of America would be in jail, starting with all the Lawyers.

It is incumbent on you, the consumer, today more than ever, to shop around on price.  And the variation in prices can be dramatic, particularly if you are unsophisticated.  And by dramatic, I mean a factor of 10 or more, in many cases.

People pay thousands of dollars over list price for a car by leasing it - and pay enormous interest rates as well.   And often, they don't even realize they did it - as they concentrated only on monthly payment, and not the actual sales price.  And yes, a lease is a sale.   And even when they buy a car, they often overpay, not realizing that the actual price was hidden in some document that the salesman glossed over during the closing.  Monthly payment is all they know.  They go to a dealer and foolishly say, "I want to pay this much per month for my car" and the salesmen then tries to sell them the least amount of car for that money.

In one blog on Edmunds, a fellow went to work for a car dealer selling cars, and confronted this situation.  He and another salesman had a problem.  No matter how they padded the price of the car, they could not make it expensive enough to meet the lady's stated monthly price.  No problem - they told her that the manager was willing to throw in the "Platinum Service Plan" for free!   No such plan existed, but it added another $1000 to the price.

And no doubt, she went home and told her friends that she told the salesman how much she was going to pay! and moreover, got the "Platinum Service Plan" for FREE!  Which of course made her happy, as like most Americans, she is deathly afraid of car repairs.

I wrote before about Dentists, and how it is indeed possible to find an honest one who doesn't charge much.  He is not the guy with the fancy office, the ads on the radio and the "free examinations!"

It is not hard to do, really.  You just have to move beyond the consumerist mindset that anything "good" has to be a chain with a slick sign and a clever ad campaign.   Usually that sort of stuff sucks - whether it is a chain restaurant, or a chain or oil change places, or a chain of dentists.

Should we feel sorry for the people in the MSNBC story?   Maybe.   No one put a gun to their head and said "borrow all this money so we can fix your teeth".   No one made them do it.   They could have done some research online first.   Hint:  Type in the name of the business and the words "sucks, scam, rip-off" or whatever and see what you get.   Ignore the mindless cheer-leading posts - those are trolls.   Look for patterns.

Part of the problem with professionals and creeping expertism ("Leave it to the Experts!) is that people just shed all responsibility and throw judgement out the door.   And it is not hard to do, when you are laid back in that dental chair, and the man in the white coat with the diplomas on the walls tells you that you need tons of dental work.   After all, he knows and you don't know squat, right?

Well, you can get a second opinion.

It is like when you sit in the Doctor's office and the doc says "bad news, you have prostate cancer" and that you will have to have expensive surgery, radiation, or chemotherapy.  All you hear is the word "cancer" and assume your life is ending - and will do anything to avoid that, even let them cut your balls off.   But some doctors are now saying that maybe this PSA test thing is overblown - and that a lot of men are having unnecessary surgery.

The same is true for colonoscopies.   Many are wondering whether they need to be so frequent.  They are profitable for the doctors, who often own the imaging centers that do them.   But in some cases, perhaps they are overkill.   I have a friend whose 85-year-old grandmother, who was very frail, was told she needed to have one - even though she was otherwise in normal health for a woman her age.  The problem is, ramming a thing up someone's ass at that age, risks tearing the colon and causing all sorts of problems - peritonitis and death, for example.  Better off to leave well enough alone.

Or take my vet.  He wants my dog to have a heartworm blood test.  The risk of heartworm among dogs on the medication is essentially zero, so what is the point of the test?    And here's the kicker:  Even if the dog had heartworms, there is not much than can be done to treat a 10-year-old dog, other than to give it a baby asprin and make it comfortable.   The treatment is so toxic, it risks killing even younger dogs, and damaging internal organs (they basically pump poison into the dog).   And older dog?  it would kill them.

So what is the point of the test again?

It is OK to ask questions like this and to consider alternatives - including no treatment at all.  And it is OK to shop around on price - you may find that prices, far from being "consistent" are all over the map and may vary by a factor of 10 or more.

For example, until recently, I used MAXEMAIL for receiving and sending faxes via computer.  I could send them online and receive them as PDF files.   Total cost?  $14 a year.   A competing service, eFax, advertises heavily (or did) online, and charged about $14 a month.  That is a price difference of 12X and a lot of money!  Of course, faxing is pretty dead now, but this illustrates the point - people charge what the market will bear, and it is up to the consumer to research prices before buying - even on dental work.

As I noted in Knowing When To Walk Away there are a host of service and product providers out there who charge what they think they can get away with - not what their actual costs are, plus a "reasonable profit margin".  And it is not hard to spot them, as they usually ask about how much money you have, first (by asking where you work and other oblique questions) and then set their price accordingly.

And I saw this at the "fancy dentist" we went to briefly - she listed about $10,000 in dental work I could have had done, including breaking my jaw, on the premise that my insurance would pay for it.   When I told her I had no dental insurance, the "need" for these treatments evaporated.

So you can pick on Aspen Dental all you want - they are just doing what a lot of people do, and it ain't illegal.

And the poor often succumb to these poor bargains, which is why they are poor!   They get payday loans, rent-to-own furniture, title pawn loans, buy-here-pay-here used cars, and whatever other shitty bargains that are presented to them.   They pay twice as much for groceries in convenience stores and bodegas.  They pay twice as much for liquor at their bars-on-the-windows liquor stores.

Yea it is a shitty deal for the poor.  But they don't have to take it, do they?

That is the upside here.  You have choices.   And you can choose to make better choices.

Even middle-class people are making poor choices these days - which is why the middle-class is evaporating.   Falling down the economic ladder, one leased car and one smartphone at a time.  And rather than trying to make better choices, most of them spend all their time justifying, using tortured logic, why their poor choices were, in fact, good ones.  "I need a new car!" they cry, "My old one is so unreliable!"

So, no, I guess I don't feel sorry for people who do dumb things.  Why?  Because no one feels sorry for me, when I make poor choices, do they?

So choose wisely.   And often the best and easiest choice is to leave your money in the bank.   Or at the very least, research the snot out of anything, before you plunk down hundreds or thousands of dollars on something.
Newer Post Older Post Home