Decline and Fall of the British Empire 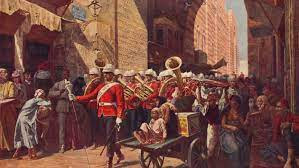 I used to get a lot of crap from my British friends - as well as American friends who moved to the UK - about how great Britain (pardon the pun) was compared to the USA.  Free college!  Free healthcare!  Parliamentary democracy!  The EU!

But it seems that, one by one, these things are being dismantled - or perhaps were not what they were cracked up to be in the first place.

This year, they had a major change in government.  Boris Yeltzin Johnson stepped down, finishing his career as PM on a high note - Brexit was a smashing success and inflation was at all-time lows and the Pound at all-time highs.

And unlike American Democracy, where an "electoral college" chooses the President, in the UK they use the much more democratic method of letting about 160,000 people (out of 67 million) freely elect the new Conservative Prime Minister - or about 0.2% of the population.   Gee, that makes our pathetic voter turnout and the machinations of the electoral college look downright democratic!

The "other" leader, who is supposedly only ceremonial, was the new King - elected by...  nobody.  Well, he was elected by birth, a process that is decidedly un-democratic and archaic in this modern age. Sadly, today, many wordwide want to go back to the era of kings and appointed dictators - failing to remember how awful things were back in those days - and why we fought a revolution to displace a King and a World War to squash dictators.  Gosh, maybe we were wrong all those years?

Maybe not.  And maybe what the UK is going through isn't any different that what people are going through in many Western countries - the US, Canada, France, Italy, Germany, and even the Nordic countries.  There is this perpetual dichotomy between conservative thought and liberal thought.  And as populations age out, the conservative think-tanks realize that the younger generation will trend liberal and conservatives will lose power.

They need a "hook" to stay in power - even as their support base races towards the grave and the majority of the population despises their values.  So how do you do it?

Well, in the US, the electoral college certainly helped Trump - and controlling the State houses allows them to gerrymander districts to skew representation in the House.  Since every State has two Senators, States like Montana, which has a population less than that of Brooklyn (about a third, in fact) gets the same representation as, say, the State of California, which has a population 40 times as large.

With these factors in play, it makes it appear that the two sides are nearly evenly balanced, when in fact, the GOP is a distinctly minority party.  But even that isn't enough - with enough people voting, the Democrats can overwhelm even gerrymandering and the electoral college - as the 2020 elections illustrated, just barely.

So you have to get younger voters.  But how?  Well, you don't run on your actual platform of cutting social programs (including college assistance) and cutting taxes on the very rich.   The young don't benefit from that platform - neither do the middle-aged or the very old for that matter (who are living on Social Security).   So you push "social issues" like this whole transgender thing which is being fanned not by transgender people themselves (other than some useful idiots) but by the far-right commentators.

Xenophobia and racism are also hot-buttons.  Immigrants are ruining "our way of life" (funny thing, the Native Americans made the same complaint, 500 years ago).  And the blacks!  Nothing but trouble!  Always whining that "their lives matter" when we know from "science" that they don't really feel pain.

Sad as it sounds, those are arguments making the rounds on the Internet these days.  Marshal McLuhan once said that television would make the world a "global village" but the Internet was what really did it.  Ideas pass from country to country in a nanosecond, and you can influence opinion on the opposite side of the globe with the click of a mouse.

So the rise of nationalism, petty dictators, xenophobia, and other trappings of the far-right, are appearing all over the world at the same time.  And young people - not a lot of them, but some - are falling for this nonsense.  The right targets the disaffected, the loners, the people who don't fit in.  They go after (and created the whole concept of) "incels" - telling unattractive, self-centered young men who are overweight and have hygiene issues that liberal thinking and feminism are the only reasons why Stephanie the lead cheerleader doesn't want to date a 75-lb overweight teenager with greasy stringy hair, who smells bad and rants about politics all the time.   If only the USA was like Iran or the Taliban, where you could just buy your brides outright!

Similarly, in the UK, you tell some lazy slob that the reason he lost his job wasn't the fact he showed up late (if at all) and drunk or on drugs, but because of "Brexit" and minorities and immigrants.  Even today, as their economy craters (faster than other Western countries) they play this blame game.  The damage done by "Brexit" wasn't the fault of conservatives, but rather petty retribution by those snooty EU technocrats!   Why can't we "fast lane" the visa queue when visiting Malta?  I mean, just because we don't let them into our country!

But of course, the problems the UK date back to the second World War.  The British Empire peaked about 1922 and then went downhill from there.  Colonialism was already dying by the time of the first World War, by the end of the second, it was largely dead.  The UK, broke and broken, retreated inwardly into itself.  Workers decided that after the travails of war, they deserved a break.  And labor strife slowly destroyed the coal industry (which was a good thing) and the British auto industry (no great loss!).  Brexit may be the final nail the coffin for remaining industry as well as the financial sector.

What's the point of all this?  Not to beat up on the UK - it is a fine country, once they work out all the bugs and maybe abolish the monarchy*.   Rather the point is, no country is perfect, and we are all subject to the same worldwide trends in politics and human nature.  Donald Trump was not some sort of American anomaly, but a symptom of a communal desire for a strong-man - a desire that seems to overwhelm humanity every 50 years or so.  Even today, people are praising "Dark Brandon" because Joe Biden appears to be taking the gloves off and "getting shit done!"

But one thing is for certain.  The next time my Euro friends crow about the advantages of a multi-party system and parliamentary democracy, I will cry "BULLSHIT!" as loudly as possible.  Because while our system is imperfect, experience has shown that other systems aren't much better - and in fact, some are far worse.

* Why not replace the royal family with historical re-enactors?  It works for us!  After all, it is what the tourists want to see - the pomp and circumstance.  And a bunch of actors would be a lot cheaper and easier to manage than the real royals.  To prevent them from being beatified, they should be swapped out every year, perhaps in some sort of Eurovision song-contest kind of competition.  Say, since Brexit, is the UK allowed to compete in Eurovision?  Just asking.  I mean, they aren't part of Europe anymore, right?