LIFE IN THE ROWBOAT 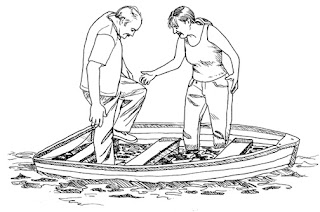 I use the rowboat analogy to describe household finances.  You can bail, you can row, or you can plug the holes.  Surprisingly, many couples try to outdo each other drilling more holes in the bottom of their financial rowboat!


Imagine you and your spouse (and family) are in a rowboat and that rowboat is your personal financial life.

Now, right off the bat, the single folks are saying "Hey, I don't have a spouse!"

Well, what about that? It certainly is easier to row a boat with two people, isn't it?  And if one person can row while the other rests, then you can get a lot further than if you were on your own.  And if the person not rowing can bail out the boat and stop up the leaks, well, you'd both do much better, right?

More and more Americans are living in single households.  And living single is about the most expensive way to live.  If you think about it, it costs just as much for two people to live in a one-bedroom apartment as it does for one.  And cooking for two is a much better use of time and energy than making a single meal - and less expensive too.

But in our country, divorce is proffered as the solution for all problems.  More and more people are living alone, or as single parents.  It is an expensive way to live.   It may sound harsh to say this, but one reason human beings form partnerships is that it allows them to live more successfully.

So, if you are single, find a partner if you can.  And before you throw them out the first time they leave the seat up or drink directly from the milk carton, think about how much money you're saving.  Marriage and Divorce are economic as well as emotional matters, and one reason the USA has such a high divorce rates is that simply we can afford it.

So, getting back to our rowboat. The rowboat leaks, plain and simple. If you do nothing, it will eventually sink. So everyone has to bail out their own rowboat, or at most of us do, anyway.  Some people ask the government to bail them out. The faster you bail (the more you work) the drier your rowboat will be.

Sounds simple, right?  Well then explain to me why many folks don't bail much, and instead spend their time drilling holes in the bottom of their boats?   Creating leaks is spending, and the more you spend (put holes in your boat) the faster you'll have to bail (more you have to work).

For many Americans, life is just a blur of constant bailing, relieved only by brief moments spend drilling more holes in the boat.

There is, of course, an alternative.  You can spend time patching the holes in your boat so that it is nice and watertight.  If you do this, you can spend a lot less time bailing out the boat.  If your boat is tight enough, you might even have some time to go fishing.   Or maybe, just maybe, pick up those oars and start rowing in some definite direction.

Of course, taking the time to plug the leaks in your personal rowboat does take time away from bailing out the bilge.  Some folks argue that they have no "time" to patch the leaks (control spending) as they are too busy bailing (working).

And they are right. They've put so many holes in their boats that the moment they stop bailing, their boat is swamped.   They flail and they sweat and they toss bucket after bucket of water overboard and then convince themselves they are still "afloat" financially, when in fact the only thing keeping them from drowning is their constant bailing.   One misstep and its all over in a heartbeat.

Patching and caulking those leaks takes time, and initially, it may not seem worthwhile.  Why worry about spending $100 a month on your phone bill when you're making $100,000 a year? The leaks are minor and you've got a super-bailer, right?

The labor spent plugging a leak oftentimes doesn't seem "worth it" when you are making a lot of money. If you are making $50 an hour ($100,000 a year) it might not seem cost-effective to waste 2 or 3 hours analyzing your cell phone bill and cross-shopping plans.  Heck, why bother?   Just work another hour at the office, right?

Well, maybe.   But the key is time.   With subscription services, if you can cut a monthly expenditure by even a few dollars, the savings add up over a year to quite a lot. And over years to an awful lot.

Many financial help gurus pooh-pooh this approach. For example, on one website I visited, a family in severe economic stress tried (too late) to cut their monthly expenses. The "analyst" didn't think that getting rid of Cable Tee-Vee or other subscription services would matter.  After all, what are you saving, a few hundred a month?

Yes, that is true, but a few hundred a month ends up as a few thousand a year and over the years, it can be tens of thousands of dollars.  It may be "too little too late" to scrutinize monthly expenses once the debt collectors are knocking at your door.   But if these savings had been implemented to begin with, maybe such financial crises could be averted in the first place.

(And the financial "analyst" of course, worked for CNN, and they would not want to advocate cutting out cable television, would they?  Of course not!)

It takes some skill, sacrifice, and time and effort to plug all those holes.   And no matter how much you plug and caulk, there are some "holes" you'll always have to live with - food, shelter, and clothing. It can never be perfect, but heck, you'd be surprised how tight a ship you can have.  And how much more relaxing it is to sun yourself than bail constantly.

Getting back to marriage, the rowboat analogy is very apt.  I've seen many marriages where one spouse is bailing like heck, while the other is jabbing holes in the bottom of the boat as fast as possible. One works, the other spends.  Or one tries to plug the holes while the other tries to make new ones. In the worst case scenario, we have the "race to the bottom" where both spouses spend most of their time jabbing holes in the boat bottom, and soon end up in Davy Jones' Locker. Or for many professional two-income households, I see rowboats with so many holes they look like soup strainers. Both spouses end up bailing like mad, working long hours and two jobs, and then spending all of their money on child care, convenience foods and restaurants, and luxury items they feel "entitled" to - usually leased cars.

And when any of these couples ever DOES get around to rowing the damn boat, one paddles in one direction and the other in the opposite.

It doesn't have to be that way at all. In some marriages, one spouse can bail while the other plugs the leaks. The so-called traditional marriage accomplished this, often very efficiently.   One spouse can work to bring in money (bail the boat) while the other can manage the money, find ways to save money (which is another way of saying living better) and in short, plug as many leaks as possible and keep a tidy ship. With a proper plan in place, they can have time to relax, as their boat is no longer in constant danger of sinking. And when they row, they and pull together toward a common destination.

It may be a simplistic analogy.   But how leaky is your rowboat? If you stopped bailing for even a month or two, would you be sunk?  Could you "float" for a year or more if you had to?  Are you bailing as hard as possible while your spouse finds new and creative ways to hole the hull?  Or do you find yourself driving holes in the bottom out of sheer spite?

The answer for most Americans is rather scary: If they lost their jobs, most would sink out of sight in a matter of a month or two. Savings in this country is pathetic at best. But spending and borrowing is at epidemic proportions.