THE PROBLEM - LIVING IN AMERICA 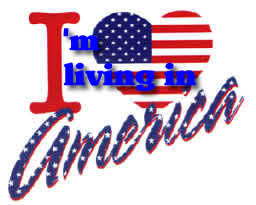 A lot of people around the world think that living in America is a great deal.  It can be - if you don't spend yourself to the poorhouse!

The basic problem most Americans face is how most Americans live in America - from paycheck to paycheck, day-to-day, without any long-term planning beyond the next pay period.

The average American looks at money in terms of monthly expenses and income - and the media encourages this mindset.  So much money comes in by paycheck, and so much goes out, with little pie-slice portions allocated for house payments, car payments, cable tee-vee, subscriptions, food, credit card payments, you name it.

The actual cost of items is never examined - only the monthly carrying charges.  As a result, the money comes in and then goes out again.   If Joe Paycheck gets a raise, that just means that another monthly expense can be added to the mix.

A huge number of Americans live like this. Maybe you do. I know I did. As a youth, I wanted to have THINGS - houses, cars, stereos, and other gadgets and toys.  And I also wanted to CONSUME - food, restaurants, movies, alcohol, drugs, you-name-it.  So I ended up spending more and more money - often more than I was making.

Modern businesses are structured to feed this need for "more right now" by (for example) offering leases on new cars (bad idea) so you can have "more car" for less monthly outlay (but end up spending more on transportation over time).

The poorer a person is, the more businesses cater to this monthly (or even bi-weekly) approach to finances.   Seedy used car dealers advertise car payments in weekly terms ("buy here, pay here") and rent-to-own furniture stores offer the promise of luxury accessories for only a pittance per month - or per week.

The reality of these schemes (and that is what they are, schemes) is that people end up paying two or three or even four or more times the actual cost of a product by paying for it on monthly or weekly installments.

I know what you are going to say, "But I NEED a car to get to work! And I can't afford to pay cash for one right now!" This may be true when you are young and getting started. But, let's be frank with each other.  Did we really NEED that fancy car that we bought last time around?  Or was it just a way of pampering ourselves?  And really, couldn't that old car run for another two or three years?

The answer, of course, is yes, no one "needs" a huge SUV or sports car to get to work.  Yet people will mortgage their futures to have shiny things.  Why? Ego is the simple answer. We all do it, even me.  It is nice to have a nice car.  It makes you feel validated.  And yes, we all like the status it conveys.

All this is very well and fine, but if you are bankrupting yourself doing it, not so good.

The key is to look at the overall cost of a product or service.  You can lease a new BMW, for example, for some "low" monthly payment - once you've emptied your bank account for the down payment and "fees" associated with most lease agreements (most folks conveniently forget about these fees and concentrate only on the monthly drain).  These "closing costs" can run from the hundreds to thousands of dollars.

Once the ink is signed on the lease, you can show off your new wheels.   But then what? read the fine print in the lease, and you'll find that if you actually drive it the average number of miles most Americans drive (15,000 per year) you may be on the hook for "excess wear" charges of 25 cents a mile or more. That could run an extra $750 a year right there.  Times three years, that's $2250 - not chump change.

Three years go by.  You turn in the car and are surprised to find there is a turn-in fee and excess wear charges - in addition to mileage.   Those scratches and small dents and the tear in the upholstery have to be paid for.   So you empty your wallet of a couple grand more and....

....you're walking.   You see, unless you sign up for this whole deal all over again, you're out a ride.

On the other hand, if you bought the same car, maybe a couple of years old, with low milage, from the original owner (not a dealer) and financed it through your credit union, you could have the same monthly payments and terms, without all the hidden "fees" and costs. And at the end of three years - you'd OWN the car.

Which is a better deal? Walking, or riding? It is not hard to figure out. A properly cared for car (more on that later) can easily last a decade or more - in near showroom condition. And once the car is paid for, well, the cost of ownership gets pretty low. Moreover, once the car is "paid off" the money you were spending on monthly payments can be put into a savings account so you can pay CASH (or borrow less) on your next car. Yes, this takes discipline and talent, but it CAN be done.

(I use this as an example. In a future article, I'll pick apart lease agreements in more detail.)

The point is, by concentrating only on monthly payment (the worst way to look at anything) the average consumer doesn't see that the overall cost of ownership is much, much higher.

Yes, you might need to borrow money when you are young and starting out to get your first car, but that doesn't mean that perpetual debt is an acceptable or desirable way of life. I've heard many folks say to me nonsense like "Well, I'll always have a car payment, so I might as well lease". This is utter nonsense.

Of course, these same folks abuse their cars and treat them poorly, and then wonder why they break down often or hold little resale value. More on that later, of course.

If you look at expenses in terms of overall cost (for ownership items, such as furniture, cars, appliances, real estate) and how this affects your overall net worth, you'll have a better handle on your finances than merely looking at monthly cashflow. Sometimes (all the time, actually) it is better to pay cash for an item than to finance it over time.

For services, such as cable tee-vee, cell phones, and the like, there is another approach. Consumers are susceptible to what I call "subscription creep" with these services, particularly when they are automatically charged to a credit card. $30 a month here, $99 a month there, and pretty soon you are looking at hundreds of dollars per month you don't "need" to be spending on services you don't really "need".

I will go more into the subscription services in detail later. But suffice it to say that the key is in rethinking what really is necessary in your life. Oftentimes many of these "must have" services such as cable tee-vee and cell phones are really more of a stressful nuisance than a boon to your personal life. You can live a WEALTHIER life without these things - or at least by minimizing them.

Take cell phones, for example. Initially, having a "car phone" or even a pager was a sign of status and wealth. Only important people who needed to be in contact at all hours (Doctors, businessmen, etc.) had such luxuries.

But today, you can spot a poor person by how much they are on the cell phone. The poorer the person, it seems, the more the phone is glued to their ear (or today, with texting, in their lap). The cell phone, in my opinion, is now a reverse status-symbol. The truly rich don't need to be accessable all the time. And moreover, I've discovered that personally, being accessable to everyone all the time is no way to get any real work or real living done.

I rarely carry a cell phone. I have one, and I use it instead of a land line (you can dock most phones to your house phones with a simple, inexpensive adaptor, more on that later). Doing the math, using a cell phone today is often cheaper than even basic land line phone service (and with multiple homes, much, much cheaper). But I don't call while I drive - or even take it with me when I go out. So many people have cell phones that I rarely worry about not being able to make a call or get in contact with someone. Running up a huge cell bill with nonsense conversations is no way to live or spend.

You get the idea. You can cut services and monthly expenses and still live a full life - even a BETTER life. The key is to continually checking these expenses and trimming when necessary. The more often you check, the better off you are.
Newer Post Older Post Home