EDUCATION - the FIRST and BEST Investment 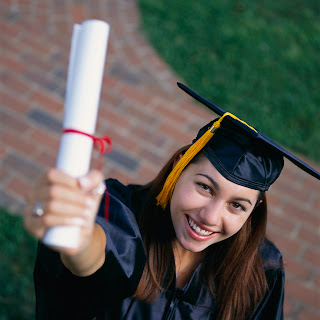 Poverty may be created by circumstance, but it is perpetuated by bad economic choices.
Many poor people eschew education and reap a lifetime of woe as a result.
When you go through a poor neighborhood, you see poor economic choices everywhere you go. Paycheck Loans. Pawn Shops. Rent-To-Own Furniture. Expensive cars parked on the street in front of hovels or housing project. Drugs. Alcohol Abuse.

But the worst economic choice the poor make is in regard to education. It is no accident that the poor are by and large the more poorly educated, and that the higher your educational level, in general, the wealthier you will become.

It seems like a simple concept. Get educated. Get wealthy.

But in most poor neighborhoods, whether they be black, white, Hispanic, or other, education is not valued, and in fact, is mistrusted and ridiculed.

In many poor black neighborhoods, a youth who takes education seriously is viewed as "acting white" and may be subject to harassment or even violence.

In many poor rural white communities, education is viewed as "elitist"and not to be trusted.

In order to move out of poverty, the first thing a person has to do is change that attitude within themselves, and then, hopefully, among others.

Of course, just any old education is not going to make you wealthier, as many a Philosophy or Physics major will sadly tell you. As recently as the 1970's, a Liberal Arts degree with an Major in English Literature was a ticket to a good job in business or industry. However, today, things have changed, and the world is a more specialized and unforgiving place.

This does not mean that one must give up education for education's sake. But that some sort of PLAN should be in place to get an education of value.

Like a lot of young college-bound kids at age 18, I had no idea what I wanted to do with my life. I enjoyed tinkering with cars, so I went off to General Motors Institute. It was a good education, and I often learned things working in the factory that GM probably didn't intend me to learn (for example, why they are in such trouble now). I ended up dropping out, mostly due to personal problems, and also because I did not value the experience enough.

Two things to take away from that, maybe three: First, you don't need a wad of money to get a college degree. Major magazines like to run articles about how many hundreds of thousands of dollars you need to get a college degree these days. But they use benchmarks like Harvard and Yale to make these assumptions. Many schools have much lower costs, and college can be had at a reasonable cost - if you are smart and hungry for it. GM actually paid me to work while I studied, and that made it a lot more affordable.

Second, going to college when you don't know what you want to do can be a foolish waste of money. But maybe not a total waste of time. Most of the credits I earned there transferred to Syracuse University later one. Third, being a college dropout is no fun, but it ain't the end of the world, either. Once you experience failure early in life, it doesn't seem so frightening.

After leaving GM, I found a job with Carrier Corporation. They had a tuition program (those were the days!) that paid for some of my night school classes at Syracuse University. Other classes I had to pay for myself. As a lab tech, it was a pretty hefty amount of money. I started to look at my courses in terms of dollars per class (about $100 a seating, as I recall). As a student-consumer, I wanted to take the best classes from the best professors, and get a real education. No more slacking off and skipping class - this was an expensive business.

That probably was the turning point for me. I realized that education was an expensive proposition and moreover it had real value. What I learned in classes I was applying to projects at Carrier. I learned to design circuits in class, and then applied that learning in the field. It lead to something concrete.

Law School was probably even a greater revelation. Courses like Tax Law were particularly useful. To most folks, Federal Income Tax is a total mystery. Heck, I could explain it to you in ten minutes. I ended up tutoring Law Masters candidates in the subject. Courses like that were like being handed the keys to the city or joining some secret society - "here is how our society works, and how you can make it work for you."

As with my undergraduate degree, my employer (the Patent Office, and later a law firm) helped pay the tuition for my law degree. I still took out some student loans (more than I should have - resist the temptation as much as possible!) but it IS possible to "work your way through college" and even law school even in this day and age. College is still "affordable" to someone who wants it badly enough.

Sadly, though, fewer and fewer people seem to want it badly enough. The native population of America seems less and less interested in higher education, and when they do go to college, often major in subject that are of little real value, but cost tens of thousands of dollars to obtain a degree in.

Recent immigrants and foreign students seem to fill the classes in Engineering, Math, Science, and Medicine. This is not to say other subjects don't also have value, but the appalling lack of interest in technological sciences in a technological society should strike us as troubling.

Education is your first and best investment.  As a youth, you have little way to make money or get ahead in life, which can be frustrating - I know it was for me!  But at least in America, an education is offered for free, for the first 18 years of your life.  Take advantage of this - study hard and get good grades.  Get secondary education, whether it is college or a trade school.  Learn a valuable skill or have some knowledge that someone is willing to pay you for.

The vast majority of the poor today have little or no education, and moreover look upon being ignorant as a blessing or advantage.  "I don't need no book-learning" is a phrase we hear all-too-often in rural Georgia.  And today, more than ever, educated people are viewed with suspicion and distrust by the unwashed masses - who are convinced that the educated are pulling some horrendous con on them which prevents them from being the millionaires they otherwise would rightfully be.

Lack of education = poverty.  It is a simple equation.  So why remain ignorant?
Newer Post Older Post Home