Class B Motorhome or Trailer? Trailer. 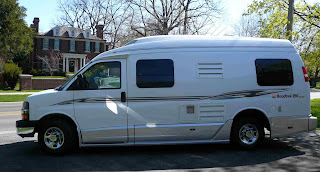 A Class-B Motorhome is a small camper built on a van chassis.  Are these a good deal?  Or is it better to have a trailer?  A trailer can cost 1/10th as much.  Any other questions?

We are traveling for two months in Canada with our small travel trailer.  We see a lot of Class-B motorhomes, like the Roadtrek pictured above, and wonder whether these are a comfortable option to trailering.

As I noted in a previous posting on the subject, one fantasy of the motorhome is what I call the 70-mph cheese sandwich.   People think that with a motorhome, they can drive down the road while the wife makes them a cheese sandwich.  But this is a fantasy, not reality, as it would be unsafe to do so - or to use the shower, take a nap, or use any of the other motorhome facilities while in motion.  If you had an accident while on the toilet, it would be a messy affair, and not just in the obvious way. 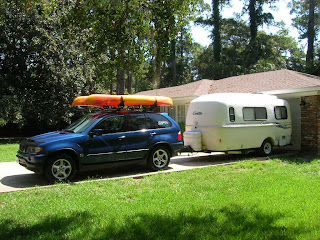 A small travel trailer, on the other hand, like the Casita shown above, has the same amount of room (perhaps a bit more) than a Class-B motorhome, but costs about 1/10th as much.   We paid $8000 for the trailer, five years ago.  It might be worth $6000 today.  Not a lot of depreciation!

And in terms of tow vehicle, you may already own one.  But even if we put in the cost of the tow vehicle, the cost still comes out a lot less.  We paid $25,000 for the BMW, again, several years ago.  So the overall cost is far, far less than a Class-B motorhome.  And when not pulling the trailer, the BMW can be used for daily driving.

And that is the big problem with the Class-B right there.  Motorized vehicles depreciate like mad, even if not driven.  And campers are used only seasonally and even then, not driven far.   We will put 10,000 miles on our camper this trip - and that is a rare exception for most campers.  Most motorhomes can go for a decade or more, hardly racking up 60,000 to 70,000 miles.  But engines don't like to sit, and a motorhome, left to sit for 8 months of the year, is rotting away like old fruit - and moreover depreciating.

So a Class-B motorhome, in addition to being expensive, will depreciate a lot.  Yes, a tow vehicle depreciates too, but since you have to own a car anyway, this is not an additional expense to have.

And when a motorhome gets to be 10, 15, or 20 years old, well, things start to go wrong, usually in the engine department.  With a trailer, you just go out and buy a new tow vehicle and start over.  A brand-new Nissan frontier crew cab can be had for about $20,000.  And it would be far more reliable than a rebuilt engine in a decade-old Class-B motorhome.

In a trailer, the only moving parts are the wheels.  Repack or replace your wheel bearings, and you've pretty much rebuilt the entire thing.  The other parts (refrigerator, toilet, etc.) don't really wear much, or at least haven't worn out on our trailer, which is now 15 years old.

But hey, even if the trailer was "worn out", a new one can be had at the Casita factory for about $20,000.  So the overall cost of a small truck and trailer - even brand new is still far less than a Class-B motorhome.

And of course there is insurance.  The trailer requires none - in the way of liability - and even collision is only a few hundred a year (we do without).  But a Class-B has to have its own motor vehicle registration, insurance, and likely collision (due to its cost).  The trailer needs only $15 trailer tags every year.  And let's not talk about property tax costs - if they have them in your jurisdiction.

The layout of the trailer allows for more room, too.   Since there is no driver's cockpit taking up room, a bathroom can fill in the whole front of the trailer and a bed can go across the rear.  Most Class-B's either have double beds (with a center aisle) and a rear bath, or a clumsy and confined side bath with a rear bed.  Either way, it isn't as roomy or comfortable.

And of course, with a Class-B, when you are traveling, you are driving a commercial van, which is noisy and uncomfortable, and everything in the back rattles as you go down the road.  We travel in a BMW, which has excellent seats and rides nicely, even hauling the trailer.  A small trailer (emphasis on SMALL) towed with a properly sized tow vehicle (emphasis on PROPER - we see a lot of people trying to pull Airstreams with minivans here in Canada, particularly Quebecois, who view tow ratings as mere suggestions) is very easy to drive, even in Newfoundland's infamous "Wreckhouse" (where tractor trailers have been known to be blown over) during the aftermath of a hurricane.

And once at the campsite, we can unhook and explore the local tourist attractions in the tow vehicle.  The Class-B people are forever hooking and unhooking, if they want to explore, and struggling to fit a van in tight spots.  And forget going off-road at all!

Garagability is often touted by the Class-B set.  But most garages cannot handle a "van with a hat" as I call them, as they are too tall to fit in.  On the other hand, we store our Casita in an $88-a-month storage locker when it is not in use, and the X5 easily fits into the garage.

Gas mileage is another thing mentioned.  But I am not sure the Class-B wins here, either.  We get about 20 mpg in the X5 (which sucks, thanks to full-time AWD) and about 17 mpg when towing the trailer.  These are about on par with even the best of Class-B motorhomes (Some Mercedes Sprinter based models claim 22 mpg, but those are just claims, and the $50,000 cost delta buys a LOT of gas!).  And when unhooked, most tow vehicles are going to get better mileage than a van.

As shown in the picture above, two Kayaks easily fit on top of our car.  With a Class-B, this would be problematic, as the fiberglass "cap" is not suited for roof racks, due to the presence of the A/C unit, etc.  Plus, it would be quite a reach to get them up there.  One couple we met solved this problem by towing a small trailer (!!) to haul their Kayaks.  So they went Class-B to get away from towing a trailer - and ended up towing a trailer!

Some folks counter that the Class-B can be used as a "Second car" when not in use as a camper.  I suppose this is an argument, but one that is specious.  While driving a medium-sized SUV is not hard to do and not TOO expensive, driving around in a 1-ton commercial van loaded with a stove and toilet is not really practical, in terms of gas mileage and maneuverability, not to mention comfort.   And the more you drive the Class-B, the faster you accelerate the depreciation.

So why do people pay $50,000 to $100,000 for a Class-B motorhome?  Good question. Why do people drive $80,000 cars that really are not much better than $40,000 cars?  People get sold things, usually on monthly installments.  They fantasize about how "easy" it would be to just pull in and park, anywhere, without having to "set up".  But it takes only a few minutes to unhook a trailer and set it up.  And that about equals the hooking and unhooking of water, electric and sewer lines than a Class-B user would have to do, every time they wanted to leave their campsite.

It makes no sense to me.  I enjoy camping, or more specifically, RVing.  But it is expensive enough, with the gas and the campsite fees.   Tacking on tens of thousands of dollars in depreciation, well, you might as well stay in a nice B&B and sleep in a real bed....

Meanwhile, the trailer, now 15 years old, is as good as new.  The RV part never wears out.  The motor part does.   Buying an RV with a motor means that it will depreciate and wear out, over time.

A hundred grand buys a lot.   For less than the cost of a new Class B, you can buy a real motorhome, even brand new.   Used, you could buy a diesel pusher.

Or, just keep your money in the bank and spend a few grand on a used trailer and use your daily driver to tow it around with!