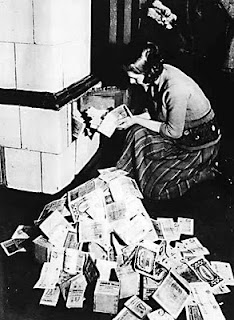 Rampant inflation in Germany in the 1920's made the Deutschmark worthless.  It was worth more as fuel than as money.  Even "mild" inflation of 10% or so can cause great economic distress to ordinary citizens.   Why are some people advocating this as a solution to our economic problems?

Inflation can wipe out a lifetime of savings and also put a wrench into the most carefully crafted retirement plans.  Are we headed for a period of inflation?  It appears some folks think we should be.

In the press lately, we are being told that what we need to fix things is inflation.  I am not sure how this works, frankly, and it scares me to death.  The last major recession we had in the USA in 1979 was marked by high inflation - in the double-digits - as well as high interest rates.  Mortgages back then were as high as 14%, which depressed home prices.  The high cost of everything meant people spent less, and jobless rates climbed to well over 10%.  Inflation is a good thing?  I think not.

Inflation fans argue that if you ratchet up inflation, people will consume more.  They argue that if prices are going up, people will buy more things NOW on the premise that they will be more expensive down the road.  This, I think, is an idiotic argument.

Most of us don't rationalize purchases this way.  If we need a car, we shop for one on price and features and make what we hope is an informed decision.  Or, at least rational people do this.  Many, many more just drive by a dealer, see something shiny, and then go in, talk to a salesman and get talked into trading in a serviceable car for something they really don't need or want - on a whim.

Either way, most folks don't rationalize inflation into the deal.  I cannot think of anyone in my lifetime saying, "Gee, I should buy a new Impala today, because the prices are going up next month!".

And I think there are two reasons for this.  First, as consumers, we do not perceive inflation that directly.  While we notice prices going up over time, this is in the form of a backward-looking model, not a forward-looking one.  So we say, "Gee, a hamburger at McDonald's used to be 50 cents" but we never say, "Gee, next year, the hamburger at McDonald's will be a dollar-fifty".  We cannot perceive the future as clearly as we do the past.

The real reason some folks want inflation - including perhaps, the government - is that it allows you to pay back debts at a lower effective rate.  If you owe someone $10,000 (enough to buy a cheap car) and have to pay it back, and then rampant inflation drives down the value of the dollar to the point where it barely pays for a cup of Starbucks coffee, then you come out ahead.   You borrow a car and pay back a cup of coffee.

Debtor nations tried this technique over the years, most notably Wiemar Germany and in the 1970's, Argentina.  Inflation rates of 1000% or more devalued the currency and wiped out nearly everyone's savings portfolio.  And of course, it ruined the economies of both countries.

In the late 1970's, during the Carter administration, we had an effect known as "stag-flation" where the economy stagnated and inflation rose.  High inflation and high interest rates meant that everything became more expensive, so people consumed less, not more.


And that, I think, is the problem with the "we need inflation" argument.   Inflation is often a symptom of a growing economy.  But it is not the cause of it.  The inflation hawks think that if you have inflation, you have a growing economy.  So if you cause inflation, this is akin to causing the economy to grow.  And it is a flawed argument, as it places the cart before the horse.

It is akin to the bed of ice they put me on as a child, when I was ill and they needed to get my fever down.  Reducing my body temperature prevented the fever from killing me, of course.  But it did not, in and of itself, cure me of the illness I had.  It merely altered a symptom of the illness.  In a similar analogy, it is like the cold medicines people take, which alleviate the symptoms of a cold (runny nose, aches, pains) but of course do nothing to kill off the virus that causes the cold.

And perhaps the inflation hawks are taking too much cold medicine to see this.  Cranking up inflation at this point in our economy is akin to the Republican's efforts to cut spending.  It will cause nothing but more and more hardship.  Cutting spending will put more people out of work, cause more houses to be foreclosed upon, and cause more economic hardship for workers.  Cranking up inflation will wipe out or reduce the effective savings of the booming retirement and near-retirement segment, and also cause hardship for workers, as they struggle to pay more for basic needs, with the same amount of income (or less).

So why are some people advocating this as a solution to our economic problems?  Well, it isn't hard to do, first of all.  Just print more money.  As you print more money, you increase the money supply, and like anything else, the law of supply and demand applies to money.  So with more money in circulation, the less it is worth.  And as I noted before, money is just an idea, not a physical thing.  And when you start printing more and more money, well, the idea of money becomes devalued.  People start to think of it as worth less and eventually, worthless.

Inflation also acts as a uniform tax on the assets of everyone.  Well, almost everyone.  It really taxes the snot out of the poor and middle-class.  If inflation surges to 10%, then your portfolio is effectively decreased by that amount - as is your income.  If you are facing retirement, this is a scary scenario, as your savings may turn out to be woefully inadequate over time.  So we pay back the Chinese with worthless dollars, but in effect, what we are doing is robbing everyone who owns dollars to do this.

And like I said, this affects nearly everyone.  Folks who can afford to do so can move their money into other areas and try to avoid inflation.   They can invest in other currencies, or indeed, even minerals or other commodities (which perhaps explains the fascination with Gold these days - and why the last gold boom-and-bust occurred in 1981, when inflation ran high, and then dropped). During the heyday of the Argentinian inflation crises, it was said that people spend a significant amount of time every day moving their money around from bank to bank, trying to get the best interest rates, to prevent what little they had from evaporating in their hands.  People who cannot afford to do this - or don't have the sophistication to do this - end up broke.

So the rich can afford to find shelters against inflation, while the middle-class and poor just get screwed.  Sounds like a swell idea, if you are a billionaire.

And it seems to me that we are seeing the early stages of inflation taking place.  More and more people are striking for higher pay, and prices of basic commodities seem to be going up.  Of course, the price of oil often drives all of this.   The inflationary recession of 1979 was "solved" by cheap gas prices of the 1980s.  The recession of the early 1990's morphed into the economic boom of the late 1990's and early 2000's - which were all fueled by cheap gas.  Owning a 2-mpg boat made "sense" in the late 1990's when gas was under a dollar-a-gallon (remember those days?  They didn't last!).

The current recession is caused by a lot of things, the housing bust being prominent.  But $5-a-gallon gas and continued high gas prices are one factor that is overlooked.   Spending cuts in the name of budget-balancing, as well as inflation, will extend the current recession, which for some folks seeking office, is a fine and dandy thing.

You can't persuade people to change governments when things are going well.  So one way to get people to vote for Communism or National Socialism, is to intentionally wreck the economy, to get people riled up for a change in leadership.

So the next time your 401(k) tanks 20% because Congress can't agree on a budget for spending or on a debt ceiling, think about who is causing this sort of problem, and what their real agenda is.  Because, chances are, they don't have your real interests at heart.

It seems to me the Republicans are hell-bent on wiping out what pitiful little I have saved, by creating instability in the markets and by downgrading national debt - and by fueling inflation.  And as a "cure" for our debt problems, they propose cutting back on the only other retirement options I have - Social Security and Medicare.  Homelessness, it seems, is not such a farfetched future for many retirees.

Why would anyone, in their right mind, vote for a party that is trying to destroy the middle class so completely and utterly?  Because they can't stand a Black President?  It makes no sense to me, whatsoever.
Newer Post Older Post Home
View mobile version