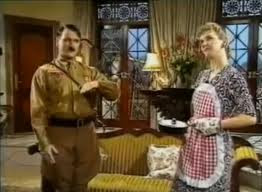 
The other day, I stumbled across Heil Honey, I'm Home! which you can find on YouTube.  The premise of the show is about the same as the premise of any television sitcom, from I Love Lucy onward - the married couple, dealing with their relationship and careers, as well as their pesky nosy neighbors next door.  Only in this case, the couple is Adolf Hitler and Eva Braun, and their neighbors are a Jewish couple.  Hilarity ensues.  Or not.

I am not sure the producers of this pilot were serious about it becoming a series.  Rather, I think it was done as a parody of the genre and it skewers it pretty well.  Other than the Nazi trappings, the sitcom plot and characters, as well as the dialogue, could be lifted from just about anything on television, then or now, from Leave it to Beaver, to Good Times, to The Golden  Girls, to That 70's Show to whatever crap they put on today (I don't know, because I stopped watching it years ago).

And it illustrates, neatly, why watching television is such a waste of a life.  You give them 30-60 minutes of your life, and in return, they give you back very little - but program your brain with poor normative cues in the form of television advertising - advertising that will lead you to believe that your life will not be complete without a new leased car, granite counter tops, or the latest electronic gadget.

And what irks me, of course, is how much of my life I spent wasting time watching things as banal as Heil Honey, I'm Home!  - or worse.  Have you ever rented a copy of The Mothers-In-Law?  It is enough to make one suicidal.

Today, not much has changed.  Brain-dead people try to draw me into conversations about the latest episode of Dancing With The Stars or some other "Reality" show.  And there is even talk of bringing back "Dallas" if you can believe that.
The average American watches 4.6 hours of television a day.   This is a staggering amount of time, given that 8 hours a day is given over to sleeping, another 8 to working (nominally) and there is only 24 hours total.  Thus, for many folks, more than half of their free time is spent watching television.  This leaves very little time left to watch your bottom line - or to even live a life.

Television is a relatively recent phenomenon.  When I grew up in the 1960's, as a child, I assumed it was part of the world (much as today's kids take the Internet or cell phones for granted).  But my parents, raised on Radio, thought otherwise, and were alarmed at the amount of time we kids spend watching the "boob tube." But they watched it, too, as television was seen as the "next step up" from Radio.

Their parents, of course, were alarmed at how much time my parents spend listening to the Radio.  And let's face it, the "golden age of radio" - as short as it was - was about as banal as TeeVee today.

The process continues, of course.  Today, Internet addiction is a problem for many (including myself).  Kids spend the hours we spent watching re-runs of "Hogan's Heroes" on the Internet instead, texting, facebooking, twittering, or, ironically enough, watching the same television re-runs we watched, only this time on YouTube.

And the marketers are at it again.  Instead of blaring obnoxious advertisements at you every 5 minutes (at a volume level higher than the programming), they insert banner ads, sidebar ads, popup ads, animated gifs, or whatever it takes, to get your attention - to capture your eyeballs.

And not surprisingly, these ads on the Internet are all for - real crappy rotten deals.  Lease a new car.  Refinance your home. Click here to find out the one trick of the tiny belly.

Unfortunately, too, the Internet is getting more and more ad-driven.  And I am not sure what the answer is.  For some, tuning out banner ads and sidebar ads is easy to do.  So the advertisers resort to more and more obscure imagery to get at us.

The only answer I can figure out is this - to unplug from media as much as possible, including the Internet.  And being on the road for two months, out of reach of the Internet most of the time, I find that not being "plugged in" is not really affecting me very much.

So, you may find I will be on less, and perhaps posting here less. Some have suggested I take what I have written here and put it in book form.  And that is an idea that is percolating in my head.  To condense over 1000 nearly 5000 blog entries into some sort of coherent narrative. An interesting challenge...
Newer Post Older Post Home
View mobile version