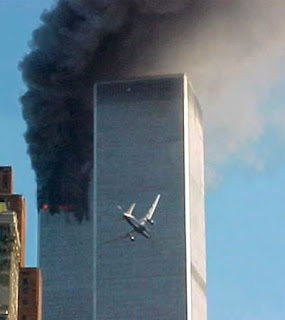 We are near Gander, Newfoundland, and they had a 9/11 celebration of sorts the other day, replete with national anthems, speeches by MPs and for some reason, the little children singing a medley of "farmer in the dell" and other children's songs (WTF?).
While we are grateful for our Canadian friends putting up over 6,000 stranded passengers on 9/11, I am a little concerned that 9/11 is fast becoming a national holiday, much as Guy Fawke's day is in England (commemorating the attempted bombing of Parliament).
Perhaps in 50 years, people will exchange 9/11 greeting cards (I am sure Hallmark is ready and waiting), and children will take a whack at the Osama Bin Laden Pinata.  "I whacked the Muslim good, Mommy!" kids will say.  Why not?  Easter morphed from a remembrance of a man slowly tortured to death to something having to do with bunnies and candy.  Time turns tragedy into celebration.  Heck, in this country, we used to make picnics out of lynchings.  Anything is possible.
Perhaps it is post-traumatic stress reaction, but Mark and I want to bury the memories of that day - and the days after.  Remember the Anthrax guy?  Getting all your mail 2 months late, soaked with chemicals?  Or the sniper dudes?  People forget about them.  People being gunned down at the Home Depot for no reason whatsoever.    We moved from DC shortly after all that.
Perhaps from the perspective of another country, it all seems so heroic and noble.  But at the time, feeling the ground shake and seeing the smoke plume up in your back yard was more of a horror show than anything else.  We went to NYC a few days after the disaster, and I can still remember the dust covering lower Manhattan - as well as the smell of the still-burning rubble pile.  It is not something I care to remember.
I dunno.  10 years later and more troops have been killed in Iraq and Afghanistan than in the 9/11 attacks.   And let's not talk about the tens of thousands of civilian casualties.  Ouch.  I am not sure we need a day of national remembrance so much of a day of national forgetting.
So, I sort of wince when the local Canadians cheerfully greet me with "happy 9/11 day!" type messages.  I guess to them, it was a time to show solidarity and support with America, and that is great.  But to me, personally, it is like a long nightmare than we still have to awaken from.
And the point of the tragedy, I think, is missed by most people.  This was not an attack by a foreign country or an organized army of militants, but rather an operation of maybe 20-30 people.  Terrorism does not require a lot of infrastructure, as the Oklahoma City bombers - and the Norway terrorist - illustrate.  What these types of attacks illustrate is how vulnerable we all are - and still are - to the whims of even a few, or indeed a single, deranged individual(s).
I am not sure turning this anniversary into an annual circus will somehow remedy that.
Newer Post Older Post Home
View mobile version