Another Day, another Mass Shooting 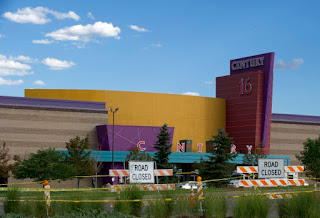 The media loves tragedy stories.  And mass-shootings are big business for the media.


People like to beat up America.  And nothing gives them ample opportunity than when some nut-job goes off and shoots a bunch of people. Our European friends lecture us on our "gun culture" and "culture of violence" even as they lap up our explosion movies.

But America has not cornered the market in nut-jobs, although we seem to do a good job of creating them.  Europe and even Japan, have had their share of people going nuts and killing folks. It is just that, among other things, those countries are smaller and thus the number of nut-jobs is proportionally smaller as well.

You remember the Norwegian nutjob who, very recently, gunned down 77 kids at a summer camp on an island.  He had that same creepy smile as the guy they just caught in Denver.  What is it with these people?  Do they go to the same photographer for their creepy head shots?

(Actually, if you look at these folks, they all do seem to have the same disturbing look on their face.  I wonder if some facial recognition software could be programmed to pick out psychopaths in a crowd.  I'll have to Patent that!)

Even our British friends, who claim to own no guns at all, have had a School Shooter, who mercilessly gunned down little kids.

So craziness is not something we have Patented.  Granted, our level of crazy per capita is arguably higher - and it certainly is easier to get guns in this country.  But as the examples in Norway and the U.K., illustrate, crazy people seem to be able to find guns, even when they live in countries with gun control.  And as the Japanese example illustrates, determined deranged people will kill, no matter what.

And of course, with some fertilizer and diesel fuel, you create an awful lot of carnage.

It is sobering to read the Wikipedia list of rampage killings - which is broken out by continent, and also shooting type (grade school, high school, college, workplace, etc.).   The list is rather extensive, multi-cultural, and spans a large period of time.  School shootings, in particular, date back to the 1800's.

But, as you read the list, one thing stands out as the common denominator: Crazy.  The people who do these things are unhinged.  And maybe, if we can't enact gun-control laws, we can enact unhinged-people laws (which would likely round up all the gun owners, predictably).

The media will (and is) engaging in a lot of hand-wringing right now, and in a few days, when the story starts to die down, they will start working the political angles.  And in about a decade, we might actually know what really happened.

Like with the Columbine massacre or Hurricane Katrina, the information you get right after the event is often wrong and often dramatically so.  And no, the nightly nooze never bothers to correct the record.

So even today, there are people who believe that bodies were "stacked up like cordwood" in the "meat lockers" beneath the Superdome.   And no one bothers to ask why the Superdome would have meat lockers underneath it.   The reality is, of course, that never happened.   But the media never bothered to correct it.

Or the "mass euthanasia" case, from Hurricane Katrina - which turned out to be made-up.

Or the "Trenchcoat Mafia" from Columbine - which turned out not to exist.

I am certain the media will come up with some other specious story to "explain" this event as well.  People like explanations - short, simple, and sweet.  We want to be able to pigeonhole these things and reassure ourselves that they are rare events and not likely to happen again.  And our European neighbors will shake their heads and say, "Thank God that sort of thing doesn't happen here!"

But it does of course. And if you want the simple, pat explanation why, well, schizophrenia is probably it.  But that is not a compelling news story, is it?

Schizophrenia sets in, in late adolescence and early adulthood. Most of these mass shooters are of that age. They go off the rails, get guns, and shoot people.  Not a very glamorous explanation, granted.  But it is the basic truth.

And what is disturbing about the explanation is that it does not pigeonhole these cases, but makes it painfully clear that they are quite common and almost to be expected, periodically, in our society, where mentally ill people are deinstitutionalized and sent off on their own with a bottle of pills and a promise to take them.  And of course, there are others who are never diagnosed, even though the warning signs were there all along.

People sigh and say "what can be done?" and others build memorials and talk about "forgiving the killer".  But maybe there is more we can do.  Maybe we can intervene earlier in these scenarios, long before they occur.  Because a pattern emerges in most of these cases - people losing jobs, flunking out of school, stalking co-workers, whatever. And this pattern is usually accompanied by sudden and large purchases of powerful firearms and ammunition.

It seems rather stupid to me to say, "We can't do anything about this" when we clearly could do something.
Newer Post Older Post Home
View mobile version