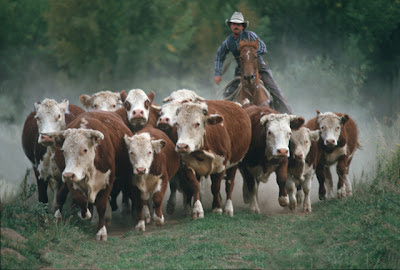 Marketers herd people like cattle.  And people are malleable enough to move with the herd.


I was talking to a neighbor the other day.  We were in his yard while the cable guy was there, installing a new cable to his house.  Why?  Well Viacom and Dish Network got into one of these periodic hissy-fits that "content providers" and "service providers" get into, and of course, the issue was money, money, money.

Viacom wanted more money, and Dish Network didn't want to pay more.  So Viacom pulled the plug and insinuated that Dish customers would never, ever, ever get their fix of programs that you can easily download on the Internet if you have half a brain.

It is like shooting fish in a barrel.  So my neighbor panics and decides to switch carriers, and while on the phone, the operator (Sanjay in Bangalor, known to you as "Mike") sells him a "bundle" of Internet, telephone, and Cable-TV with "Great Savings!" and a monthly bill of well over $150, once the six-month discount expires.

"I'm saving a lot of money!" he crows, forgetting for the moment that the reason he has Dish network was another "bundle" he was sold a few years ago.

We were then talking about the cost of owning a home, as he is thinking of refinancing his house.  At age 75, he has a mortgage, and with only a few years left on the loan, is refinancing the balance to "get a little more cash every month".   Age 75, and still living the cash-flow lifestyle.  Sad.

Sad, because I own my home, free and clear at age 52.  And I realize how lucky I am.  We are talking related home expenses, and he tells me his utility bills are nearly double that of mine - but he keeps his thermostat set very low in the summer and high in the winter.  I pay about $200 a month, he's paying nearly $400.  Ouch.

And insurance?  about 50% more than I am.  That pesky mortgage prevents him from going to a high deductible or changing coverage.  "Besides," he says, "I get a great discount on my car insurance by bundling it with my homeowners plan!"

Ah, the "bundling" trap, yet again.   I was about to tell him I pay $15 a month to insure my car through GEICO, but I think better of it.  Best not to piss him off.  You can lead a horse to water, but you can't lead cattle anywhere except to the slaughterhouse.

I walk away dazed.  Here is a fellow who is going to refinance his house, add $3000 (at least) to the balance, in terms of closing costs and fees, extend the period of payment another decade, while at the same time, is paying too much for insurance and telecommunications services - not to mention electricity.

I didn't even ask him about his cell phone bill.  I didn't have the heart.

So, like most Americans, rather than take on his spending habits as being the source of difficulty, he takes on more debt to pay for it.  The debt will likely outlive him.

And this is the norm for most Americans - they are herded like cattle.  Viacom and Dish network have a little pissing match, so in response to Viacom's baiting, people switch services.  No one bothers to think that maybe watching television for 4.6 hours a day is a waste of money - and your life.

And rather than cut expenses in life, people would rather borrow more, save less, and sacrifice their future for the now.   People think in terms of monthly cash-flow and not in terms of overall net worth over time.

It made me sad, as he and his wife are nice people - smart people - and certainly deserve more in life than a mountain of debt and cable bills.

But then again, this is the way our society is structured - in fact, you might argue that at his age, he might as well just squander it all, as if he has any money leftover, the nursing home will get it, as he would not qualify for medicaid if he has any money.  So when you are over age 70, our society - and government - says "spend it all".

I am just not sure I would spend it on cable Tee-Vee, myself.  I hope my "golden years" are not spent in front of the boob tube.
Newer Post Older Post Home
View mobile version