Winning by Not Losing 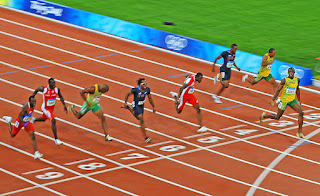 In a foot race, coming in first is winning.  In life, just finishing the race is winning.


Winning by not losing.   What do I mean by that?  In life, particularly in America, it seems everyone wants to "win" all the time.  They want to have a fancy car, the latest electronics, and the "in" t-shirt from the local mall (not that t-shirt, the other one!  Please, no one wears those ones anymore!).

They view this lifestyle as "winning" in the economic race of life.  So long as they have the correct SUV and the fancy bathroom, go to the right places on vacation, and of course have their daily designer coffee (held head-high, arm raised, elbow out, label facing outward) they can show the world they are winning.

In places like New York City, they take this to ridiculous extremes.  Women have to have the right shoes and $5000 pocketbooks (and those are the cheap kind) and send their children to the "right" preschool whose tuition cost more than Harvard.   They are trendy, they are chic, they are so much better than everyone else - and they are "winning"!

But of course, it is a pile of false values.  The expensive pre-school is not really that much better than the one their maid sends her kids to.   And the designer coffee takes like crap.  And the $5000 handbag is made in a sweatshop overseas, right next to its $150 knock-offs.

But worst of all, many of these folks are not really winning, but only appearing to win - financing all of this on a mountain of debt which will catch up with them, over time.   And in the last five years, it has caught up with a lot of Americans, who are pissed off (but not rightfully so) that someone has taken away their "dream".

Trying to win at life is a flawed goal.  Because life is not a game with "winners" and "losers" and the scoreboard, if there was one, is not tallied with dollar signs or fabulous prizes.

Moreover, even if it were so, there can only be one winner in any given match, and a whole host of others will come in second place - if not dead last.    If your happiness is predicated on your winning then you will be in for a whole lot of misery in life - as few people win in that way.

As in a law firm, in any company, or indeed, any society there are a few people on top (those 1%'ers the pot-smoking Occupy Wall Street crowd whines about) and a lot of people coming in second place.   Statistically, the odds of you being that wealthy, powerful, successful, or whatever, are very slim.

And that is why I left the big-city law firm.  I didn't get an "A" in probability, but I realized that the odds of me making partner in a law firm were far less than 1 in 10.  Why stick around running a race you cannot win?   Particularly when someone else profits from your efforts?

This is not to say you should not try in life, only that you should get comfortable with the reality of your life and embrace your mediocrity - as odds are, you are mediocre.   I mentioned in another posting regarding Vance Packard about "strivers" - the people who are just a little bit above middle class, to the point where they can taste a little bit of wealth.   As Packard noted, these folks will spend themselves broke trying to be what I call pretend rich.

The very poor and middle class, they know what their lot will be, and they act their income.  The very rich can do what they want.   But the so-called upper middle class ends up bankrupting itself, when they spend just one notch above their station in life.

And that is one sure way to lose at the game of life - to chase after the material as an indicia of success and happiness, only to end up broke and unhappy.  Just running the race and being successful at your own level - and happy - is the key.

And in reality, if you can do this, you may end up winning more than the fellow who comes in first.  I regularly get e-mails from my old colleagues in the law business who chased after those false dreams.  They bought the mini-mansion with the granite countertops, and they lease the fancy new cars and their troubled spoiled children are off in private schools.   And they are miserably unhappy.   They are trapped in their jobs - needing that huge paycheck to finance it all.  And they hardly know their children or their spouses (plural, as they are usually on a second or third one).   They have won the race, at least according to the media cues they relied upon, but at age 50, it all seems so unsatisfying.

In my own life, I can attest to this as well.  We had the vacation home, the fancy cars, the boats, and all of that.  It was fun - for about 30 seconds.   Then we realized that things were not an end in and of themselves.  Doing things was better than owning things.   So we sold it all, cut way back, and can live on less - or nothing at all.   Owning ourselves was the best thing we could buy.

Does this mean we have all the fancy stuff?   No.  We drive older cars, and don't buy designer coffees anymore.   And we realize that all that sort of crap was just a false set of values promoted by a media machine that - big surprise here - wanted to sell us something.   The promised to make us "winners" if we would just buy all the right crap.   It was a false promise.

Winning in life is just a matter of not losing.  And often "trying" to be a winner is about the only way you can really lose.

Life is not a race.  It is more of a walk.  Enjoy the walk.
Newer Post Older Post Home
View mobile version