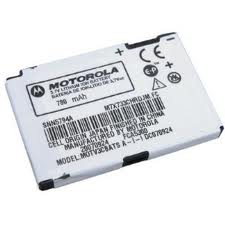 Replacement cell phone batteries cost only a few dollars, including shipping.  They are easy to replace.  Unless, of course, you have an iPhone.
My old cell phone is horrifically obsolete.   But all I used it for is the occasional mobile phone call, or for that dreaded "calling a tow truck on a rainy night" bit.  Funny thing, though, even though I drive decade-old cars, I haven't needed a tow truck in over 20 years - except when I was in a wreck, and even then the Police called the tow truck, not me.

Oh yea, I forgot to repeat the media mantra, touted by the Car Salesmen of America.   Anything less than a brand-freaking-new car is unreliable and might leave you stranded somewhere.   I promise to utter no more heresy in this regard!

Most cell phones are technologically obsolete - or hopelessly out of style - long before they physically wear out.  And of course, the phone companies would prefer that you "upgrade" to a new phone and sign up for three more years of a "plan" in order to get a "free phone" - which of course, isn't free.  Overall cost?  $2000 to $3000.   My cost?  $200 to $300.  I'll stick with my "plan" thank you.

But, after a while, even if you like your old phone, the battery will take less and less of a charge - and eventually your battery life will be reduced to hours, then minutes, then nothing.  What do you do?

If you go to the helpful and friendly cell phone store, they will tell you (with a straight face) that "they no longer make batteries for this phone" - which of course, is not true.

Just pop the cover, remove the old battery, put the new on in, charge it up, and the phone will stay active for days at a time now.

If you old battery is going bad, you may notice that the case "puffs up" a bit and is not flat anymore.  That is a sure sign it is going dead.   Over-charging the battery may be one problem.  I use a docking station for my cell phone, and I think it tends to over-charge the battery.  But even then, the battery lasts about three years - a lifetime in the cell phone business.

If the battery puffs up enough, it may bend the cover slightly, and the new battery may rattle around in there and not make consistent contact.  I fixed this by folding a business card and putting it between the case cover and battery, to force it against the contacts.  Problem solved.

Many modern phones, particularly Apple iPhones, do not have replaceable batteries.   The battery can be replaced, if you mail it off to Apple or take it to an Apple store and "let the experts fix it!" - for a pretty hefty price (far more than $3.40, to be sure).

Again, this is literally the "sealed box" approach of Apple, and it is appealing to people who buy new electronics all the time (and thus squander their Estate) to be trendy.  They have no abilities or skills of their own, and thus prefer to "leave it to the experts!" for everything.  Replacing the battery on a cell phone would no doubt scare them, as would screwing in a light bulb ("Let's see, is it 'left-loosey, righty-tighty,' or the other way around?  I forget!").

It is one approach to life - but an expensive one.   It would be like owning a car with the hood welded shut, and a small sticker that said, "No user-serviceable parts inside.  Refer servicing to authorized service personnel".

And unfortunately, cars are getting to be this way, more and more.

But, if you have a non-Apple phone - one that is not a "sealed box" - you can keep using it as long as it keeps working.  And when the battery gets lame, over time, for less than the cost of a designer coffee, you can just replace it.