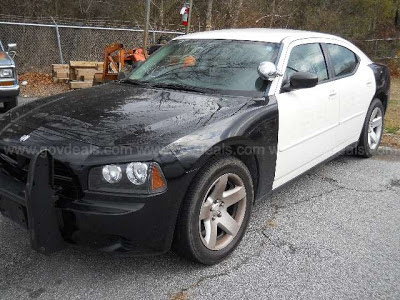 There are no bargains to be had at government auctions, so don't bother.

I recently visited a number of government auction sites:

And there are many, many more.

A lot of folks are convinced they are "missing out" on some great bargains, when Uncle Sugar throws away perfectly good cars, trucks, and other equipment.

But after looking at lot of this junk, I have to say, this is not true.  The police cruiser above, with 98,000 miles on the clock, was bid up to over $4000 at the time I viewed it - and the auction was hardly over.

Police cruisers lead a hard life - driven constantly, sat in for long hours, taken on high-speed chases.   And while the Police garage services them regularly, by the time they are auctioning them off, well, they are pretty clapped out.

And let's face it, if you bought one, you'd be driving around in an old police car.  Are you going to pay to have it repainted?  Of course not.

On the other hand, I think some folks get off on driving an old cop car, like the Blues Brothers, and the black-and-white paint-job and "cop shocks, cop springs,..." are part of the appeal - and why these are bid up in price.

For someone who wants a cop car, no price is too high.  For the rest of us, who want general transportation, they are overpriced.

And yes, Virginia, there are "drug-seized" cars on the sites as well, but they are also bid up in price.  And as you might expect, drug dealers don't really take good care of their cars (they are not car people or very knowledgeable about cars) and often they are "modded" very poorly with crappy aftermarket add-ons.

Since they are pretty much bid up in price, they are no bargain.

The point is, yet again, There ain't no such thing as a free lunch.  You have to stop being a raging true believer and an idiot - thinking you are going to outsmart the world and score a "deal" when the most you can expect to score is a fair bargain.

And those ads in the back of magazines (and now on the Internet) promising to hook you up with "$500 government drug-seized cars!!!"  are not going to do much more than steer you to the sites I have hyper-linked above, for free.

Again, think about this, carefully.  If the government was auctioning off drug-seizure cars for $500, and you knew about this, wouldn't you be buying these cars and then reselling them and not tellling anyone about it, ever, ever, ever?

Of course you would.  You wouldn't sell the goose that laid the golden egg.

You might, on the other hand, decide you could make a lot of money selling people the idea that the government is giving away things, and for a nominal fee of $5 to $50, you could sell the links to auction sites and some half-assed information about how to go about bidding on government surplus property.

A week later, he got a letter with some badly mimeographed pages that basically said, "Well, if you want to buy a government surplus jeep, call the Army and figure out where they auction the jeeps, and then go there and bid on one......"

Yea, my brother got ripped off.  It was only $5.  But multiply that times the thousands of people who send in that $5, and you can make a lot of money - in a real hurry.

The reality is, the government isn't giving away drug-seized cars or anything else, for a pittance.  There are so many bidders out there - including dealers and professionals - that the prices they get for stuff is pretty close to market value.

Yea, you might get a deal on a five used pianos or a lot of 100 student desks.  But the kick is, you have to drive to the site and load up all that stuff.  And of those 100 student desks (or the five pianos), half are broken and the other half, well, what are you going to do with 50 student desks, even if they are just $200 for the lot?  You'd have to find someone who will buy them from you.  In other words, you'd have to start a business of reselling government property.   And there are already people in that business.

But no, there are no screaming bargains on these sites.  You are not missing anything.  So relax.  You are not missing the boat on $500 government auction seized drug cars.   If you send away money for "more information" - information that you can get online, such as at the links above - you are just pissing money away and making a con artist happy.

Search the government auction sites.  They are interesting.  But you will likely come to the conclusion that there are no real screaming bargains there - unless you want a clapped-out old cop car, or some Hoop-de that a drug dealer owned, that has 22" rims and has never had an oil change.

Knock yourself out.  Myself, I will fish a little further upstream.
Newer Post Older Post Home
View mobile version