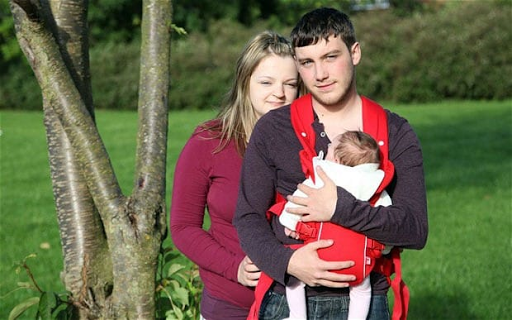 When kids have kids, the Grandparents often have to suffer.


As I noted in my Teenagers Having Kids posting, one of the worst financial mistakes any young person can make (worse than student loans!) is having children unintentionally, early in life.  It is not only an 18-year sentence, but can affect your career, profession, and overall quality of life - forever.

However, I had not thought of the consequences to the Grandparents, until recently.  We were camping in Massachusetts recently, and across the way was a family from Canada. They were nice enough people and all, but were very loud and obnoxious and did things like cut through other people's sites and shout at each other all day long.  They were also kind of trashy.  I was kind of shocked, as the perception that Americans have of Canadians is that of people who are more restrained, politically correct, and well, smarter than Americans.  But Canadians have white trash, too.  You just don't see it as often.

But I realized my perception of this family was wrong, when the daughter said to the boy, "You go stay with Grandma, Mom is going out with her friends!"  (I was not snooping, you see, because everything they said was at full volume and you heard it, whether or not you wanted to).

I realized that it was not Mom and Dad and two kids, but Mom, her new Boyfriend, the Daughter, and the daughter's out-of-wedlock son.   How Normal Rockwell.   We came back to our camper one day to find the daughter on the cell phone at our picnic table, moaning on about how the baby's father refuses to look for work, etc. and how Mom's new boyfriend was a pain in the butt.  So it filled out the picture.

What was sad was that Mom (the Grandma, not the daughter) had to bear the brunt of this all.  Daughter was still going out and partying and hanging out with boys (no doubt working on Baby #2) while "Mom" (Grandma) had to deal with the howling brat.  And like most modern parents, they tried to negotiate and reason with a four-year-old, with predictable results. The nightly tantrums were broadcast all over the campground, and every time, after an hour of howling, the "Parents" (Grandma and her new boyfriend) would back down and the four-year-old would win.   Another sociopath in the making.

It was hard to feel sorry for any of them, as they were an obnoxious "family" to be near.  However, in one unguarded moment, I saw the face of Grandma, and it showed all the fear, anxiety and sheer exhaustion and frustration in her life.  She had a child, and assumed that after 18 years or so, that child would leave home and move on.   But instead, her child had a child, lived at home, and left her to raise yet another child, while her daughter went out partying and having a good time.

Suddenly, I was no longer angry that this obnoxious family was so loud and difficult.  Their lives were a wreck, and their futures were all very sad and depressing.  Grandma had the worst of it, having to deal with the howling brat along with the verbal abuse from her own daughter.  What Grandma's boyfriend saw in all of this, I do not know.  I am guessing that is why he is in no hurry to marry Grandma.

And I wonder if Grandma thought that life would not end up this way.  Perhaps in another world, she would not yet be a grandmother, and her daughter, now 21, would be telling her about a "nice guy" she just met, who had a good job and career prospects.  Instead, she gave it up for 10 minutes of fun with a jerk with a cool car in high school, and the whole family has to pay now, for decades to come.

Part of the problem, of course, is that these folks were from Quebec (but spoke English, not French) and being from a Catholic country, so to speak, no doubt felt that contraception was a bad idea and sex-before-marriage just won't happen if you will it not to.  I wonder if Grandma has softened her stance on contraception since the brat popped out.

And this is not unexpected. Teenage pregnancy rates are highest among fundamentalist religious groups  - those who do not believe in birth control.    Just take a gander at the Palin family (before you look away in horror).   Children having children, and the grandparents end up raising them.

Of course, this is not to say that contraception is always the answer.  I knew a "progressive" family (read: drunks) when I grew up, and the Mother put her daughter on birth control as soon as she started menstruating.   She felt that she could not control her daughter and didn't want any "accidents".   On the other hand, this sort of message kind of backfired, as the daughter felt it was carte blanche to go out and have sex with as many boys as possible. And despite the use of birth control pills, she ended up married with one-on-the-way at 18, and divorced by 21. And despite how "progressive" her parents were, they were not happy that their daughter was knocked up so early in life.

I am not sure what the point of all of this is.  I guess 100 years ago, a girl would get pregnant at age 16 and that was pretty normal - as was living with your parents (with your husband, however).  Back then, a girl was expected to raise her children, not pawn them off on Grandma so she could attend a rave or go to the bars with boys.  I guess it is that latter part that has changed - adolescents and young people feel entitled these days to the party life, even though their life choices dictated otherwise. Student loans, children out of wedlock, why should it interfere with having a good time?

The real victim is, of course, the child.  It was hard to feel sorry for the howling 4-year-old brat, who thew fits every night (and rocks at our camper).  One wanted to smother him.  And no doubt, his later life will be difficult, as he discovers that society won't give him everything he wants, just because he threw a fit (I tried it, didn't work).  Like I said, sociopath in the making.  Which makes us all victims in the end.

So perhaps Grandma does have a choice - to enforce discipline on her daughter and grandson.  If daughter threatens to leave, so be it - the environment she will raise the kid in can't be any worse that the dysfunctional family unit he is in now.   But that's easy to say, and hard to do, of course.

All I can say is, I am sure glad I am not in that situation.  The haggard tired look on Grandma's face was enough to break your heart.  I wonder if she ever imagined that her life would end up like this.
Newer Post Older Post Home