Is the world crazy, or getting crazier? 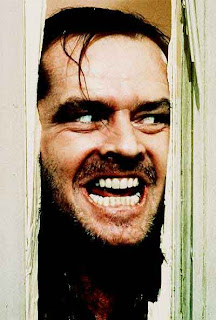 Are we collectively going nuts?

In response to a recent posting, a long-time reader writes about his frustration with friends, family, and relatives.   They all have basically disassociated themselves from reality it seems.

His experience mirrors that of most folks these days.  A sister enmeshed in an MLM scheme, latching on to whatever trendy weight-loss program that comes down the pike.  In-laws who are convinced that day-trading or stock picking is the way to assured riches (no doubt buying gold as well).  And of course, a crazy Uncle who forwards conspiracy-theory e-mails.

And everyojne buying everything on time, leveraging themselves further and further into debt, and then whining about it on Twitter using their smart phones.

And of course, they all have to keep up with their favorite "reality" television programs.

Were we always this dumb, or is this a recent phenomenon?

Perhaps a little of both.   In the 1960's, a unionized factory worker could piss away a fortune over his lifetime, buying junk on time.  And then he could retire with nothing - as he had a fat pension plan from a major corporation to fall back on.   That all evaporated in the 1970's and 1980's, as defined pensions were replaced with 401(k) plans and foreign labor competition shut down the union factories.

So yea, we were always this crazy, but conditions have changed to make crazy have much more dire consequences.

And perhaps out politics are more polarized today than in 1968.  We generally don't have riots at political conventions anymore, so maybe that isn't quite right.  Hard to say, actually.

Some would claim that our markets are more volatile today - with all the "little people" playing the market and all the shenanigans the big fish are playing, stocks can soar and plummet in a matter of days or even hours.

But then again, the same thing happened in 1929 - when grocery clerks were buying stocks, with predictable results.   When average people think they can get ahead without work or thrift, well, it goes South in a hurry.

The vast majority of the great unwashed are, well, unwashed.  That was the point of the last posting.  My family is about the same.  I have a brother who really believes that Communism is a swell idea and "if only" we'd given the Soviet Union a chance, well, it would be a Socialist Paradise today.  I have another brother who believes in conspiracy theories, and also that anything bad that happens to him is because of other people who are "assholes".   Yea, he smokes a lot of pot, too.

It goes on and on.  People believe what that want to believe - what is convenient for them, and what makes them feel good.

Because, let's face it, reality sucks and is depressing.  Escapism is much more fun.  Blaming your misfortunes on others is a lot easier and makes us feel better about ourselves.  Unless you have a really, really strong constitution, perceiving reality for what it is could be a deadly game - it could lead to depression and death.  Maybe that is what happened to Robin Williams, I dunno.

So maybe living in a fantasy world is a survival instinct.  And as a race, it keeps us glued together and keeps people busy with what amounts to make-work.

And maybe that is why few people are able to act rationally in an irrational world.  The CEO of a large company is paid a million bucks a year simply because there are few people out there who can live in reality.  You need a guy who can make hard decisions without sentimentality or delusion.  And sadly, most companies lack such CEOs - cranking out crappy products and running inefficient money-losing factories that should have been closed years ago.  But too often, people, even CEOs, fail to perceive reality as it is, and as a result, they get cashiered.   And the "new guy" is called an "asshole" because he does what needed to be done a long time ago.

We are in Massena, NY, which borders the St. Lawrence Seaway.  I was watching a documentary at the visitor center (hosted by a young, circa 1958 Walter Cronkite).   He talks about the cheap hydro power and how ocean-going ships will bring commerce to the great lakes - and how cities like Cincinnati, Chicago, and Detroit, will become prosperous inland ports.

Cheap hydro power or not, all of these towns have shut down their factories, and huge jumbo container ships drop off their loads at deepwater intermodal ports, where they are put on trucks and trains and sent to their destinations.  The dream of the St. Lawrence Seaway has passed by.  We are camped next to the Eisenhower Lock, and maybe one ship a day passes through, if that.  How sad.

But how predictable.  With staggeringly high labor costs, manufacturing in the "rust belt" died off over the last 40 years.  Without capital to invest in new machinery, companies one after another folded.   We still make some things in this country, but not so much along the Great Lakes.  Michigan now bills itself as the "beer state" not the home of auto manufacturing.

Who knows?  With cheap land costs, maybe these areas will come back over time.   But sadly, the unions (and mafia corruption) will keep labor and overhead costs high, for years to come.   Towns like Massena (which has an Alcoa plant) will remain sad and depressing for the foreseeable future.

But that's just my perception of reality.  Some of the locals here, not having seen other parts of the country, no doubt think the high-paying union jobs are coming back "any day now" or that someone "took away their jobs".   No one will look inwardly and wonder if maybe the union antics of the 1960's were to blame.