Is a Job a Means to an End or an End in and of Itself? 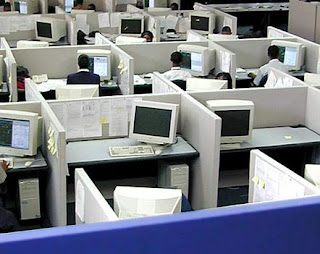 This is not life.  This is a way to make a living.  There is a difference.

I was recently interviewed by a young associate with the Wall Street Journal Online, who was trying to put together an article about people who chucked the rat race for something simpler in life.  It was an interesting interview as she was wondering whether I had any regrets about giving up status items in exchange for owning my own life.  I told her no.

I also mentioned that many folks in this country get caught up in "Jobs" which they tend to view as an end in and of themselves, rather than a means to an end.   What do I mean by this?

Well, for a very few of us, a career is the centerpiece of our lives.  Famous doctors and lawyers and craftsman and businesspeople, live to work, it seems, and can't imagine doing anything else.  Some become very rich, while others would work for free, if they could afford to, as they care less about money than their life's work.   Sadly, few of us have this desire or option in life.

Most of us work at "Jobs" that are little more than a paycheck - a means of survival.   We work because we have to, because we need the money.  Yes, work becomes a social outlet and an identity.  But few of us love our work or view it as our life's passion.  Not many of us will become famous for what we do for a living - the vast majority of us are unknown and forgotten clerks or laborers, who will not be remembered in history.

And that's OK, too.   The world is structured that way, and there is little point in fighting it.

In my field, this is also true.  There are few, if any, famous Patent Attorneys.  Outside of our own little circle, name recognition doesn't carry very far.  There are no Clarence Darrows in the Patent Business, just a few Attorneys who might have brief fame or run a big firm, and then fade into the night.   And I know this, because I've worked for these folks, and seen their names chiseled off the door of the firm, as soon as they are cold in the ground.

So for me, the idea of becoming a "famous Patent Attorney" seemed like an oxymoron.  Moreover, I knew my own abilities and while I can draft a pretty good Patent Application, I was not cut out to be a courtroom litigator.  Few are - and most Patent cases are settled on the eve of trial.  A Patent litigator can go an entire career without ever addressing a jury.

While I have enjoyed my work, I think of it as a job.  It is enjoyable enough not to be boring and just obnoxious enough to make me realize it is work - and that someday I hope to stop doing it.  Someday soon.

And that someday comes for all of us, eventually - at least the working Joes and Janes that make up 95% of the U.S Population.   Not all of us can be Frank Lloyd Wright, working until their last breath.  The rest of us have to retire - or have retirement thrust upon us - and thus have to live off our life's savings.

And this is not such a bad thing - being retired and goofing off.   Yet many folks cannot fathom it, or are uncomfortable "doing nothing" all day.   Hard to believe.

The point of  my comment to the young WSJ reporter is that the working stiff should never lose sight of the fact that a job is a means to an end - to accumulate wealth, not dissipate it.  But most folks chose to do the latter.

The average "working stiff" in America complains about "living paycheck to paycheck" while at the same time accumulating luxury goods and services, all paid for in monthly installments.  Smart phones, designer coffees, cable television, leased cars, oversized houses - all paid for with credit.  The working stiff views their financial health in terms of borrowing ability.  They worship their credit score, which is a false God, instead of their net worth.

In never ceases to amaze me how some folks who are ostensibly "poor" or "lower middle class" can end up accumulating lots of crap - cars, boats, motorhomes, jet skis, and the like.  But the secret is really no secret.  They live in a hovel that is worth less than the cost of the motorized vehicles parked in front of it.  And everything is paid for with credit, often at onerous interest rates, and they are in debt up to their eyeballs.  But hey, they have a nice new toy tractor, right?  It is not hard to buy expensive crap.  All it takes is a W-2 and the willingness to go into debt.

Almost worse than the financial aspects of a "Job" are the social ones, and often one ties into the other.  Many folks turn their place of employment into a social circle, and thus not content to spend eight hours a day with other cubicle-dwellers, spend their social time with them as well.   Sadly, this leads to competition among fellow employees, and suddenly, leasing a new Acura seems like a sound proposition.  People tend to emulate those around them, and look for normative cues on how to behave.  And often the normative cues you get at work are the worst sort.   I never met a boss who was unhappy when his employees went into debt.   An indebted employee is a reliable employee - and unlikely to leave the company and start a competing business.

Of course, these are choices we make in life.  And many folks are very happy, it seems, to be in perpetual debt.  Many are satisfied with a social circle that is mostly friends from work.  Many are happy to work at a job they "hate" as they fear trying anything else (and live in fear of losing their hated "job" because of their horrendous debt-load).

However, owning yourself is a very liberating experience.  And once you own yourself, you are in a position to do what you want to do with life - be it goofing off, or starting your own business.  If you read the biographies of famous people, you will notice that many of them save up their money, rather than spend it, and thus are able to break out on their own.   You never read biographies of famous people who stayed at a crappy job so they can make payments on their Chevy.

I am not sure I am getting the point across here.  But the bottom line is that every penny you spend on junk that you think you have to have (but really don't) is a link forged in the chains of your own slavery.  You are enslaving yourself for a Starbucks, or a smart phone, or for cable TV.   It is a choice.

Note:  There was a movie that came out a few years ago, called In Time, which was not well-received, although the premise was interesting.  In a dystopian future, time becomes the ultimate currency, with everything you buy paid for in terms of  your life expectancy (and money you earn expanding that life expectancy).  The rich can live forever, while the poor live very short lives.  In a way, this does mirror the life expectancies in reality today.

Sadly, the movie was a little overwrought (and starred Justin Timberlake) and thus did not do well.  Few saw it, including myself.  Maybe I'll rent it someday.

four minutes for a cup of coffee?

I do like the one line in the movie, "Four Minutes for a cup of coffee?"   That is about the actual cost.  $5 on a cup of Designer Joe, every day, comes to $1825 a year.  Invested at even modest interest rates, over a working life, can add $100,000 to $200,000 to your IRA.  Yet how many people in line at Starbucks have little or nothing saved for retirement?

Four minutes may in fact be a bargain, compared to what we are paying today!  But of course, in the movie, just as in reality - no one makes the decision not to buy, do they?