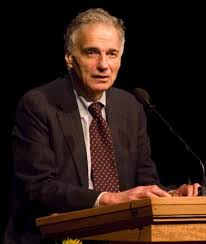 Third party candidates don't get elected.  They do insure that the candidate with opposing views to their own, are.

Third party candidates are nothing new in American politics.  Immature emotional thinkers decry the lack of viable third parties and point to parliamentary governments overseas as examples of better systems of democracy.   Unfortunately, these are often bad examples, as fringe candidates and fringe parties can end up spoiling elections as unsavory coalitions are made so that one party can assume power.   As part of these coalition agreements, often bizarre and harmful concessions have to be made to some splinter party.

We have the same problem in this country, except that third party candidates usually end up electing their diametrically opposed political opponents, rather than strengthening the candidate with views more similar to their own.  In short, they are spoilers.

Teddy Roosevelt ran on the "Bull Moose Party" platform in 1912, after having served two terms as President.  He siphoned off enough votes that it insured a Democratic victory for Woodrow Wilson over the Republican Taft.

In other words, had Teddy stayed loyal to his party, Taft would have won.  Instead, he insured the election of the candidate least aligned with his own party and own views.

In our modern era, we have seen this effect twice, and are poised to see it a third time.  When Clinton went up against George Bush, third-party candidate Ross Perot acted as the spoiler for Bush, siphoning off just enough votes to insure a Clinton victory.   Perot had no chance of winning, and his views were more closely aligned with Bush.  He insured a victory for his opponent.

The Bush-Gore debacle illustrated exactly how slim election margins can be and how 3rd party candidates can skew elections.   Ralph Nader, whose only credential is writing books on auto safety, decided to run as a 3rd party candidate, even though he never served in any other elected office.   He had no chance of winning, of course.  But he siphoned off enough votes in Florida to turn that State for Bush, and thus the election.

You can argue all you want about how "unfair" the vote count was in Florida - the bottom line is, that if the Nader voters went for Gore, he would have been elected President.  Third party candidates are just spoilers.

We are poised to see this happen yet again.  Bernie Sanders is running for President, as a Democrat, even though he is not affiliated with the party as a Senator.   Best described as a socialist, he is the darling of the far-Left.  Since he was elected to the Senate as an independent, it is not farfetched to see him running for President as an independent (or affiliated with a fringe party) when he loses the Democratic nomination to Hillary (which he will).

And I predict this is how it will play out.  And once again, Florida will be the key.   After screwing around with fringe candidates themselves, the GOP will nominate Jeb Bush.  Bush will have the home-state advantage in Florida, and the election there will be close.   A good turnout by Democratic voters could turn the State for Hillary.   And once again, on election night, we will have a hair-raising photo finish.   But since Sanders will siphon off just 1-3% of the vote, the State will go to Bush, as will the election.

In his first year in office, Bush will dismantle Obamacare, eliminating health insurance for millions of people.  Emergency rooms will be flooded once again with the uninsured.  The poor, unable to afford cancer treatments and other life-saving care, will be left to die.

And a lot of other odious things will be passed by the Republican controlled House and Senate - and passed into law by President Jeb Bush.   Consumer protection agency? Gone.  Banking regulations?  Gone.  Stock market regulations?  Gone.

But you can say "Hello" to the Confederate flag again, as well as a "Marriage Protection Amendment" to the U.S. Constitution.

That, in short, is the GOP strategy for 2016.   In recent weeks, it seems that America has gone very liberal.  But to some extent, this could be a ploy to generate backlash and resentment in America's heartland.  The GOP needs to get people riled up - about immigrants and social issues.   Obamacare isn't selling well as an issue, as more and more people are getting on it, and realizing that having health insurance for the first time in their lives is a pretty neat thing.

So, you use "social issues" to rile up the base.   And you attack Hillary with vague claims of malfeasance.  And a third party candidate like Sanders, well, he is just icing on the cake.

What puzzles me is why these third party candidates run at all.   They must realize that their only effect is to get the opposition candidate elected - one with views extremely opposed to their own.  Wouldn't it be better to have a candidate whose views are only slightly different that yours, elected?

Sadly, it seems they never make this calculation.  And usually because they are all first-class narcissists.