How Marketing Has Redefined Our Language 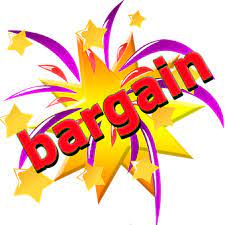 Words matter.  And if you can define the terms of a debate, you win the debate.  The same is true in the marketplace.


As a "consumer" (a word that has replaced "citizen" or "human being" in our culture) you may see the terms "Bargain" or "Sale" or "Savings" used in connection with commercial transactions.  And likely, you salivate at the sound of these words, as you feel these terms mean there is some discount or freebie involved.  And why you salivate, is of course, no accident.  These are high-index words designed to get at you emotionally.

But the terms really have value-neutral meanings.   It is the marketers that have made us feel they mean something else.  In another posting, I noted:

The term "bargain" is used in Contract Law to define an agreement between two parties.  I pay you $5, you sell me your old hat.  We have a bargain.   To most "consumers" the term "bargain" implies some sort of discount or sale or freebie.   I am not using the term in that manner, anywhere in this blog, unless I describe something as a "good bargain" or "bad bargain."  A "bargain" by itself is value-neutral.

Similarly, the term "Sale" has taken on a meaning that is not what was originally intended.   When something is "on sale" that means it is for sale.  It means, simply, that it is being offered to the public for a price. Today, we use this term to imply that discounts are being applied or that merchandise is being sold at advantageous pricing.

But of course, it isn't.  Many stores today routinely mark-down merchandise (from "suggested retail prices" which are made-up) by 50% to 70% or more, which is utterly ridiculous.  But even at these prices, they are still making money. A pair of pajamas marked down 70% to $15 is still profitable to the merchant, who paid $5 to have them made in China.

"Savings!" is another term that irks me in the way it is used. If you buy those pajamas, you haven't "saved" 70% at all.   At the "regular retail price" you simply would have refused to buy them - like most people - and they rarely are offered at that price anyway.  Retail prices are arbitrary markers not indicia of real value.

If you buy those pajamas, you did not "save" 70%, as you did not walk out the door with an $85 pair of pajamas, but rather a $5 pair that you paid $15 for.   In fact, all you did was just spend money and if you bought them because they were "on sale!" and you really didn't need them in the first place, then you just squandered money.

But again, that doesn't sound as sexy as "Savings!" does it?

Savings are what you put in a savings account.  It is money you accumulate, not fictitious discounts from arbitrary price pointers.

Yet it is surprising how many believe otherwise.  Otherwise rational people believe that in real life, a car is "worth" 5% more tomorrow because the Dealers "sale" ends then. They fail to see this as merely a pressuring tactic to get people to think less and "buy now!"

How these terms got so mixed-up is hard to say.  But I believe it is the end result of over a hundred years of marketing - of bending and abusing language to sell products.  Marketers know which words go right to our gut.  Today, the phrase "Free Gas!" will get people lined up around the block, even though they have to buy $200 of groceries to get $5 in "Free Gas" - which of course means it wasn't "Free" - was it?

If you can set the terms of a debate, you can win the debate.  And we see this all the time in politics.  Abortion opponents are not "anti-abortion" but "Pro-Life!" - and their opponents have similarly named themselves "Pro Choice!" - a naming battle the pro-abortion side clearly lost ("Life", in terms of emotional index, beats out "Choice" every time).

None of this happens by accident.  Merchandisers, advertisers, and marketing people know how we think emotionally and how to get to us, often in very subtle ways.   And one of these ways is to redefine the very language we speak.
Newer Post Older Post Home