For Sale By Owner 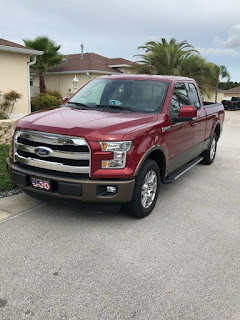 Buying a car from an individual can be a hassle, but you can score some good bargains - sometimes.


We are still looking for a truck to pull the new trailer we ordered.  Maybe in six months, they will all be on sale as the economy collapses.  Perhaps.  Sales of vehicles in general have tapered off in recent months, and several car companies are showing signs of stress.  Ford is facing a shareholder revolt.  Nissan just fired its CEO for tax evasion.   Chrysler and GM are fighting with the President over tariffs that are set to explode in January and could kill off the car business entirely, as auto price skyrocket by 25% or more.   What could possibly go wrong?   Oh, right, and the fact that most buyers are upside-down on loans and can't afford a new car if they wanted one.   That.

Buying a car from an individual can be a far better deal than from a dealer.  If you look at Edmunds.com or KBB.com or NADAguides.com, you'll see the "private party sale" (or trade-in prices, which are close to private party sale prices) are usually at least 10% less than dealer retail - sometimes as much as 20%.  So it pays to look.  But when buying a late model car, particularly these days when cars are so expensive, it can be difficult to find the right vehicle and make a deal.

Many high-end cars, which today includes $70,000 pickup trucks, are leased and thus when turned in, end up on dealer lots with dealer high prices.  Fewer late model cars are "for sale by owner" these days.  And cars on the used car dealer lot with really low mileage?  As I noted in another posting, likely wrecked.   Many other new car buyers who actually bought their vehicles are often upside-down on their ride, and thus will trade-in with a dealer and fold the negative equity into a new car - in a slow-motion death of their fiances.   Eventually, someday, they will be so upside-down that they can never trade-in, and they will either get re-po'ed or end up in bankruptcy.   Kicking the can down the road isn't just a sport popular with local governments or companies with unfunded pension plans!

I did find one truck online that looked pretty decent - two years old, 20,000 miles on the clock, and a motivated seller.  He had retired and wanted to get rid of truck as it no longer fit his needs (he sold his boat, so no need for a tow vehicle).   It was located in Florida, so I had a friend down there look at it.  I did a price analysis on it using the aforementioned pricing sites, as well as checking prices on dealer lots, for sale online, and whatnot.    I made him what seemed like a reasonable offer, which he accepted - contingent on my inspecting the vehicle.

There were some warning signs, though.  The photos he took of the truck were crappy, and the interior photos showed dirty carpets and a dog bed in the back.  This was not a "car guy" who lovingly washed and waxed and detailed the truck.   He also said he didn't have service records handy and that is problematic.  We made arrangements to visit him and test drive it and have a mechanic look it over.   I put the necessary funds in my checking account.

And then, just to be sure, I ran a CarFax on it (AutoCheck is another service I could have used as well).   It showed "damage" from January of 2017, which could have been storm damage or backing into a lamp post or whatever.   In June of 2017, it was in an accident that cost "more than $400 in damage" (the reporting level in Tennessee) and that it was towed from the accident scene.

I asked the owner about this and he said it was "cosmetic damage - just new fenders, hood, grill, and bumper" which is a bit of an understatement - that is a whole new "front end clip" not just a ding in the bumper.   And in a truck with an aluminium body, repairs can be tricky.  How much did the accident cost?  Was it repaired at a reputable shop (or the one the insurance company recommended?).  Were original OEM Ford parts used?

The big problem is, the CarFax has a black mark on the history of the vehicle, affecting not only its resale today, but its resale for years to come.  Anyone can run the CarFax and find this out.  Only when the vehicle falls down the food chain to the point where it is selling for a few thousand dollars will people simply not care about accident damage (and at that point, I suspect a lot of these new Fords will be scrapped for their aluminum recycling value, rather than sold as transportation).

So it affects the sales price.  I had offered him $32,000 for it - the most I've ever paid for a car.   It was a fair offer, not a steal, and not a rip-off, either.  Come to find out, he owes $30K on the loan.  This complicates things - which is why people buy from dealers instead of individuals.   A dealer will finance for you, put temp tags on it, and send you home the same day.   Of course, the "dealer retail" on this truck is $37,000 which means you pay nearly 15% more for the vehicle than you would from a private party, not including dealer fees, finance fees, and fee fees.

But in a private party sale, if the owner has a lien on the vehicle, it gets sticky.  You can pay the owner, and hope he pays off the loan and sends you the title.  Or you can pay his bank directly and obtain the title in their offices and have him sign it over to you right there.  If the bank is out-of-state, however, it gets more difficult - they have to overnight the title to the owner, and he has to sign it over to you.   In the meantime, if you took possession of the vehicle, how do you get it home?  With no tags, you may get pulled over.  And no, you can't get "temp tags" in most States - those are reserved for dealers (by design).   One county in Florida offers to issue temp tags, provided you pay a $60 fee and 6% sales tax.  Even transit permits are hard to obtain, and are for a limited time.

You can see why people opt for the "hassle-free" experience of a dealer (although that "hassle-free" experience often means sitting in a cubicle for several hours while they wear you down).   Buying from an individual owner is a better deal, but since so few people know how to navigate even the local DMV, they opt not to do it.  And that in a nutshell is why FSBO prices are lower.

But now I see why he is trying to sell it FSBO.   If he went to CarMax, or indeed, tried to trade it in, he would likely get less than he owed on the loan.  So he would either have to fold negative equity into a new loan, or come up with cash to sell the vehicle.  And since it has a tainted CarFax report, it isn't worth as much as I offered him.  In fact, it may be worth less, in private party sale, than the loan amount - or about equal to it.

But the main thing is, he sort of lied to me.  Not a direct lie, but a lie by omission.  And I should have caught this right off the bat, when I asked detailed questions and got answers like "yup".  When someone isn't forthcoming with data, there is a reason why.  I assumed it was because he was elderly. Maybe it was because the more he said, the worse off he would be (the same is true if you are questioned by the Police).

If you enter into any business relationship predicated on a lie, no matter how trivial that lie, it will only go downhill from there.   And in this instance, something as glaring as having the whole front end of the truck replaced is kind of an important detail that an honest person would disclose to a potential buyer.   I certainly would.  But that is why I have a 100% positive feedback rating on eBay after selling several (more than eight) cars, two campers, three boats, a motorcycle, and an antique tractor on that site.  I am right up front about any scratches, dents, or previous accidents.   People can find this out for themselves, or by a simple inspection - why not mention it up front?

So we go back to looking.  We have until July 22, 2019 which is the date we pick up the new camper. So there is no real hurry at this time.  Maybe, just maybe, we'll see a FSBO truck for sale between now and then.  But I suspect next year, you'll see a lot of people underwater on these expensive rigs, and unable to afford the payments.   There will be trucks galore, on dealer lots, bought at auction after they've been re-po'ed.  The economy is slated to tank.
Newer Post Older Post Home