Stormtrooper Killed in Rebel Raid Was Family Man, Hoped to Graduate from College

He was so young and full of hope.

CORUSCANT - The names of the victims of the latest rebel attack were announced today.  Among them was a young Private, who left behind a wife and child, as well as his dreams of a better life.

Pvt. Jones, known to his friends as "Gary", graduated with distinction from Stormtrooper academy and had served several years on the Death Star before being transferred to Tatoonine.  He was attending Darth Vader Academy, an on-line for-profit school run by the Dark Lord, and hoped to graduate this spring.

He leaves behind a wife and two young children.  "He didn't deserve this," General Veers noted, "We'll make sure the rebel scum pay for this!"

He will be missed by friends and family.

OK, maybe that was in bad taste.  But it illustrates how one person's "good guy" is another person's "bad guy."  And in today's climate, we seem to be rooting for the bad guys a lot of the time.  The entire premise of the Star Wars franchise is that a rebel alliance were the good guys and the status quo needed to be destroyed.

If you parlay this into present-day terms, well, think about it. Who are the "brave rebels" in today's world, and who is the "evil empire"?  Darth Trump?

Yet so many people indulge themselves in this rebel chic. Many secretly root for the enemies of our country, or at least secretly admire their style. When I was a kid, my older brother had a "Che" flag hanging in his dorm room, and a copy of Chairman Mao's "Little Red Book" in his back pocket.  The fact that the "cultural revolution" was going on in China at the time made this last item particularly obscene.

Looking up to my older siblings, I thought this was cool too, and even made a "Che" shirt with silkscreen.   It was the style at the time - and even today.  We laud "Che" in the "Motorcycle Diaries" as a rebel with a cause - to help Bolivian miners.  And the media, particularly on the Left, still posit he was a hero.

Then I met a friend of mine who escaped from Cuba in 1968, and the story he told me was something different. While Batista was no sweetheart, and the American Mafia did run a lot of the Cuban economy, Che Guevara was a merciless child-killer, not some rebel hero.  I promised him that someday, we'll take a boat to Cuba, swim ashore, and blow up the statue of Guevara in his home town of Santa Clara.  Fuck Che. Fuck the Taliban.  Fuck ISIS. And yes, fuck white supremacists and "Antifa" idiots, too! 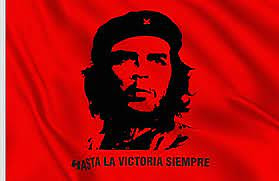 Violence is an easy answer to complex questions, and easy answers are usually the wrong answers.  Working to change things from within is a lot harder - but it usually does get things done.  Our generation "won" the cultural battles of the 1960's, not through rioting and bombings, but by getting older, taking jobs and becoming the new status quo.

This whole "rebel" thing is overdone, but yet it appeals to every new generation that comes along.   And why is this?   Well, it is just an extension of teenage rebellion - a way of overthrowing their parents' authority and the authority of older people who seem to hold all the cards (and the money) and make the rules, when you are just starting out.   No one bothers to think that the old fart who is fat and happy probably started out just as they are, with nothing.

That is, of course, the only good news about the whole situation.    People often espouse radical ideas when they are young.  They want their turn in the sun, and they see overthrowing the system as the only alternative.  But as they get older, and start accumulating wealth, a funny thing happens - sharing it with others seems less and less an attractive idea.

Kyrsten Sinema started out, years ago, as an openly bisexual left-wing Green party candidate.   I think she realized that was a non-starter, and over the years, her politics became more conservative, and as a result, she won election not as an Beto-like radical, but as a middle-of-the-road Democrat.

Her path isn't unusual.   The hippies and yippies turned into yuppies by the late 1970's, for the most part.  Others, such as my brother, didn't get the memo that actually having nice things wasn't evil, but in fact a human instinct.   While his compatriots were getting jobs and snorting coke at the disco, he was strumming a guitar and smoking pot in an unheated barn in Vermont - for a decade or more.  The communes fell apart because people are people - and people want to improve their lives, not wallow in squalor.

So what's the point of all of this?  Perhaps nothing.  But perhaps that buying into someone else's political cause isn't necessarily the best thing for your own personal interests.   Becoming a member of the "SDS" and blowing up buildings and killing people, isn't solving any of the problems of our society, but rather creating more.

As it turns out, the violent radicals didn't cause any change in our society.  In fact, you could argue they impeded change, as people reacted (justifiably) to violence, and that the use of violence discredited the causes they were fighting for.   So not only is getting sucked into rebel chic a waste of your own life, it ends up negating the very causes you are supposedly fighting for.  And let's face it, half the people involved in this sort of nonsense aren't really causistas, but just violent people looking for an outlet for their malfeasant urges.  The "anarchist" dude trashing a McDonald's in a riot really doesn't have a political cause, he just likes to smash things (and eventually, people).

Sadly, the allure of being a "rebel" will not fade away anytime soon.  And new images replace the old, to continually stoke the romantic idea of the David-v-Goliath conflict.    Che really never died, he just morphed.
Newer Post Older Post Home