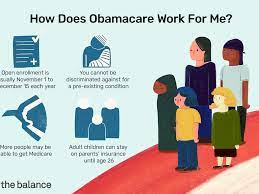 Obamacare just gets better and better!


We get back to the house and in the mail is a letter from the "Health Insurance Marketplace" which apparently is the Obamacare government agency (but sounds like a sound-alike come-on) telling me that Blue Cross Blue Shield of Georgia is no longer offering plans in my area and that they have automatically signed me up for a "Ambetter Peach State Health Plan" for 2019.

The good news is, the Ambetter premiums are half that of the BCBS plan of last year - about $1200 a month versus the obscene $2000+ a month that BCBS wanted.   But what is going on, exactly?

I call BCBS and they tell me they are no longer offering plans "in my area" but won't say exactly where my area is, or why they have bailed on me.   Inexplicably, BCBS sends me new insurance cards for a plan that is ending in a month - along with a brochure asking me if I want prescription coverage.  It is all part of a "Welcome to Blue Cross Blue Shield!" starter package.  Perhaps they meant to send me the "Go Fuck Yourself!" package instead and got confused.

Seriously, though, I can see why BCBS has such high costs.  Their website is a nightmare of bad HTML and crashing pages (Healthcare.gov isn't much better - when you hit "enroll" it goes to hourglass, indefinitely).  The amount of duplicate letters and e-mails and documents I get from BCBS is staggering.  Just recently, I got a series of e-mails saying "thank you for your payment of July 1, 2018" and "Thank you for your payment of June 2018" and so on, going back to December of 2017.  This was followed by an email saying, "please ignore the previous e-mails we sent you."

So what is this Peach State thing?  I call them and (after being transferred to the correct number) they tell me I am already enrolled and I need do nothing.   I am on the Healthcare.gov signup page, and they offer about five plans to me - all from Ambetter-Peach State.  No other health care providers are listed.

The plan they signed me up for is there - a bottom-tier bronze plan that has pretty high deductibles, but offers pretty decent (I guess HMO coverage).  But for the same price, there is a silver plan that has no deductible, but ominously says that emergency room coverage requires 40% co-insurance.  There is a "max out of pocket" of about $5000.   If I run up a $100,000 emergency room bill (not hard to do these days) do I owe $40,000 or the max out of pocket of $5000?

I called Peach State twice, but no one seems to know for sure.   I am on the phone for an hour.  One person I called said to call the "Health Insurance Marketplace" (the government) as they would know.  But when I call them, they say, "I wish they wouldn't say that, as it is their plan and they know the coverage, not us!"

While I have him on the phone, I ask about this ominous letter they generated on the healthcare site asking me to provide documentation of income by February 19, 2019.   Do they want documentation of 2017 income or 2018?  If the latter, I doubt I will have my 1099s or taxes done.  If the former, my concern is that my income is too low to qualify for subsidy.

So I ask the guy what the income cutoff limits are, and he says he can't say for sure - "It all depends on a number of things" but says that the February 19th deadline may be extended.   We'll see.   It is all very odd, and no one has answers to even the simplest questions.

As I noted before, the problem with Obamacare is that if you make too little they throw you off the system and it isn't clear whether you have to repay any subsidies.  If you had a $24,000 subsidy on your premiums, but then make only $20,000 a year in income, you may be thrown off (and forced to go on Medicaid, provided your State expanded medicaid) and it is possible you may be asked to pay back $24,000 on an annual income of $20,000.

And as I noted before, if you make over the magic number of $69,900 (or whatever the cutoff is this year) your subsidy may go from 50% to zero, just by making that extra dollar.  For a family of four, this could mean that they are hit with a subsidy bill of over $20,000 in a single year, just for making that extra dollar.   And we all know how easy it is to forecast exactly how much money we will make in the next 12 months, right?  Even if you are salary, it may vary.  For hourly people, it is much harder, with variable hours, overtime, and bonuses.

So I end up signing up for the "Bronze" plan they suggest.  I am not sure what it covers, if anything.  That is the problem with all health insurance these days - you have to get sick to see what it really covers. And then you'd have to wade through pages and pages of contract language and argue with people on the phone to cover individual items - but only after being dunned by the hospital for six of those $65 aspirins (when they gave you only one!).

So I signed up for the "Bronze" plan - I think.  When I get to the last page on Healthcare.gov, and "sign" the page and agree to everything, it just goes to hourglass and bombs out.  When I log back in, it says my 2019 plan has been "submitted" but then warns me my application is incomplete.

Well, the fifth time is the charm.  Seems I had to select a doctor in order to complete the plan.  It finally says the application is submitted, but a balance of $0.00 is due and if I don't pay $0.00 by January 15th, my coverage will be terminated.