A Nation of Weaklings 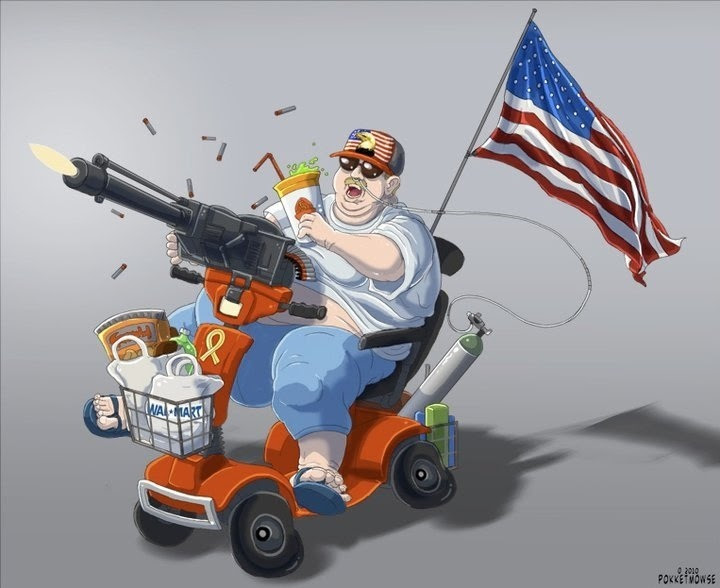 When did our country become so weak?


It is hard to believe, sometimes, that we fought in two world wars, lived through the depression, and landed a man on the moon.   I mean, this is the same country that is now hand-wringing over every little piece of bullshit that comes down the pike?   The same country full of unfit people who are so nervous they need to be medicated or have "service ferrets" calm them down?

The stereotype of the American today isn't the manly GI fighting in the Battle of the Bulge, or Rosie the Riveter rolling up her sleeves to get the job done on the B-24 assembly line.   No, it is the overweight man in the electric scooter, on oxygen, buying candy-corn Oreos at Wal-Mart.   This is how far we have sunk.

People are so weak in this country.  They don't want to work for a living, but rather want a "guaranteed minimum income" because that sounds great when you are high all the time - high on drugs that you need to quell your anxieties about life.   Drugs that end up killing you, too.

On National People's Radio this morning, a promotion for a new book about the airline industry.  In the closing comments, the author, who once worked for American, uses this "Service Animal" nonsense as an example of how we have gone too far in this country.   Airlines made headlines recently by refusing a service peacock on the plane.  These are not animals for the blind, deaf, or physically handicapped, but for nervous people who claim they cannot fly on a plane without a pet.

Here's an idea:  If you can't fly on a plane without your pet, take a car, take a bus, take a train, take a Valium, but don't argue that the rest of us should be inconvenienced for your sake.  Maybe if flying makes you that nervous, you shouldn't be flying.

But like clockwork, the News Nerd at NPR chimes in that some people need these animals to calm their nerves when flying.   I need my "service cow" Bessie on the plane.   Please clear three rows of seats and provide straw for her, because under the law, I'm entitled!

Dogs can bite.  One woman was recently mauled to death by her own dogs - convinced she needed not one, but two pit bulls, while living with her parents.  Pit Bulls - vicious dogs that were bred to kill.  They ate her flesh.   How long before someone brings one of these treats on the plane?

Some said that the dogs were "nervous" after she left home, which is why they killed her.  Maybe the dogs needed a service animal of their own.  Teacup poodle, perhaps?   Or maybe they should have been put down long ago.   Dogs like that are not pets - they are wild animals.

And why do people feel they need to own vicious dogs in the first place?  Oh right, the culture of belligerence.

The culture of belligerence and the culture of victimization - are they related?  You bet!   Next time you are in Wal-Mart, look to see who is the most arrogant, rude, and pushy person in the store.   Yup - the asshole in the electric scooter, whose only "disability" is being fat.

They can walk from their car to the store to get in the scooter, but for some reason, walking in the store is too hard for them.   They cut you off, block the aisle, ram your ankles, and say rude things to you.   "Victim here!  Coming through!  I'm entitled to all of this - and you have to accommodate me!"

It is bullying of the first order - and something really handicapped people don't do.  The guy who had his leg blown off in Iraq doesn't do shit like this - it is only the self-identified "victims" with their "special needs" who throw this in your face.

We are a nation of weaklings, it seems.  Half the country is in electric scooters or wishing they had one.  The other half is claiming to be allergic or intolerant of a litany of foodstuffs.  "I need my special meal!"  they declare, because they want special treatment.  "A gluten-free airline meal for me, and another one for my service ferret!  I demand it!"

But this sort of belligerence isn't strength, it is weakness.  And indeed the entire culture of belligerence is based on weakness.  The "badass" guy gunning the straight-pipes on his Harley next to you at the light isn't strong, he's weak as a baby.  His painted on a patina of toughness that is not even skin deep, and the strap-on balls of the noisy bike are his version of the service ferret.  Odds are, he is losing much of the time in life, so his only outlet is to intimidate other people with his toughness persona.   He may be fucked over by his boss, the banks, his ex-wife, and the legal system, but he can compensate for all of that (and his small penis) with one trip to the motorcycle store!

There was a time in this country where strong people were actually strong, and this meant that they didn't have to engage in these rituals of bravado or ask for special treatment.  You never saw John Wayne showing off or asking for a wheat-free meal.   How did we get from Point A to Point B?

In part, I think, it is because we are a compassionate country and want to help people. Laws designed to help the really handicapped participate more fully in public life resulted in wheelchair cutouts and handicapped parking.   These were good ideas.  The sad thing is, the non-handicapped viewed that as "special privileges" - as if being handicapped was some sort of treat and that preferred parking made up for being disabled.   It didn't - it just made it easier for those who couldn't walk, to get out.

I noted before how in Crystal City, Arlington, everyone became handicapped overnight when they announced that anyone with a handicap placard didn't have to pay for meter parking. And overnight again, they became able-bodied, once the rule was changed back.  Time was, it would be viewed as shameful to pretend a handicap to seek advantage in life.  People would be tarred and feathered for that!  Today, it is commonplace - and my own Father (and several friends) crow over their handicap placards that "allow them to park close in!" even though the placard has long expired or was issued for another family member.

We are so used to special treatment, that we take it in stride and expect it.   The other day, at a county park, the ranger asked if I was over 55 - and offered me a discount based on my age.   I never thought being over 55 was some sort of handicap, but of course, I took the discount.   Others expect it, and badger park rangers for discounts they are not entitled to.   I've seen it happen - and I've seen them hold up the line while they marshal their legal arguments why an old-age pass for a Federal Park should give them discounted admission to the county water slide - or whatever.

This compassion is also why we've crippled ourselves with language.  We cannot say anything today, lest we offend some group or another.   Labels are oh-so-important and if anyone slips up - even once - it's curtains for them!   A friend of mine once remarked that when he was in France, he saw people wearing "those faggoty little hats" (berets, I think he meant) and he was instantly horrified he used this phrase in front of us.  I told him it was no big deal and tried to put him at ease.  But from then on, he was always nervous around us - fearful he would step into some PC dogshit and offend us in some way.  And it made me think how PC talk has indeed separated us into groups - groups that are afraid to talk to one another for fear of offense.

We are so weak today, we are offended by words.   And by words, I mean these phrases that the PC-people claim are inappropriate.   Meanwhile, people can profess admiration for Adolf Hitler or white supremacy and that's protected speech.  It seems the really offensive stuff offends no one, and the stupid labels are more important.   Call someone by the wrong label, and they wilt like a hothouse flower.

And maybe the other reason why our country has become so weak is that we can afford it.   During the depression and World War II, the country had to gird itself for adversity and warfare.  People were suffering - and dying - and it was no time for mamby-pamby talk or victim culture.   Get in shape and get going!  Feeling sorry for yourself isn't going to accomplish anything!

But today, we are relatively conflict-free, and despite all the whining in the media, we are a very wealthy country - we have the fattest poor people in the world (and the richest).   So we gaze inwardly and try to find new things to obsess about - it is natural, like Boyle's law about gas expanding to fill a container.   Until something more important comes along, transgender restrooms seems like a burning issue.

We saw this after 9/11 and again during the market crash in 2009.   People realized there were more important things than political maneuvering and trivial injustices in the world.   But this feeling of unity lasted only months, before we went right back to political squabbling and the selfishness of the victim culture.

Maybe something will happen - a recession, for example - that will put all this trivial bullshit into proper perspective.   Maybe, but I wonder.  The roster of Democratic candidates for President seem to be falling all over themselves to see who can be the most politically correct.   Apparently they haven't figured out that the political incorrectness of our current President is what got him elected - and what endears him to his supporters.