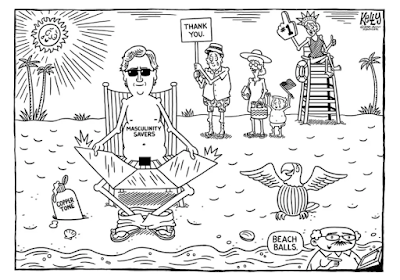 Does the world suffer from low testosterone?  I don't think so....

A few years ago, we were visiting an...ahem!... clothing optional gay campground.  I noted before that this naturist thing is interesting, but not what people think it is.  Anyway, there was this guy there who had clearly been to the gym a lot and had one of those body-builder bodies, covered from head-to-toe in tattoos, like the illustrated man.   We were talking with him and he admitted that he had taken a lot of steroids over the years, as well as testosterone supplements.

"I wasn't gay until I took testosterone," he said, which was kind of an odd thing to say.  He said the testosterone supplements increased his sex drive so much that the only way he could find relief was with other men - the women couldn't keep up!  Well, that was what he claimed, anyway.

So this idea that high testosterone levels will turn you into a manly heterosexual is kind of flawed. Some of the most "manly men" I have ever met were gay.  I remember when I was President of the Gay and Lesbian Student Association at S.U., we organized a "Gay Pride" celebration with some local organizations, one of them being the Gay Volleyball Club.  I went to visit the guy who ran that, and he was an ex-marine, a wall of muscle, nearly seven feet tall.  He was mowing his lawn and he was pushing the mower with one hand, like he was handling a toothpick.  The idea that gays are all effeminate twinkies is somewhat wrong - although they do exist!

But what is behind all this talk about testosterone levels?  Well, of course, part of it is the grifting angle - television personalities selling quack cures to the gullible plebes. Another part of it is political - claiming that the world is turning queer because of low testosterone, or on the flip side, low testosterone is a result of too much touchy-feely politics.  Being male, in their minds, means being an insensitive jerk.  And quite frankly, we have enough insensitive jerks in the world as it is.

The above cartoon from The Onion, parodies Tucker Carlson's recent rantings on this issue ("All Tuckered Out").  Apparently, Tucker, a real Renaissance Man, who went to Swiss boarding schools and is heir to the Swanson TV Dinner fortune (bootstraps and all, ya know!) is of the opinion that lack of UV light on the testicles is responsible for low testosterone levels worldwide.  You have to let the boys out on occasion, I guess, or subscribe to one of his laser ball treatments (no thanks!).  It may explain why testosterone levels in the gay nudist campgrounds are at all-time highs.  But I am not being serious.

What is going on here?  Well, again, besides the grifting angle, it is a political thing.  The idea that women are people, too, is scary to a lot of folks, particularly insecure men.  It is part-and-parcel of this "incel" thing where men are being told that women should be submissive and the only reason they are not getting laid is... feminism.  The narrative is that we are turning into a nation of sissies because we are not being jerks anymore and treating women like property - and now allowing them to vote!   You laugh, but bear in mind that women didn't get the right to vote until 1919 - more than a half-century after black men got that right (well, in theory at least).

But it goes beyond that.  The "#METOO" movement scares the crap out of a lot of people on the Right - or even the Left.  The idea that you can just go up to a woman and grab her anywhere is something that not only President Trump endorsed, but Joe Biden was caught doing (although he never went for the money shot, as far as we know). Being affectionate? Or sexual harassment?  It is a fine line.  And folks today are finding their careers ruined from actions they took years ago when such things were deemed "OK" - ask Al Franken about that.  He was, of course, an utter piece of shit anyway.

But of course, the raised profiles of gay people and now transgender people is riling up a lot of folks.  Most people want to be left the hell alone (at least I do) but it seems the media loves a good "gay" story and goes orgasmic over a "trans" one.  And some trans folks seem to enjoy the attention - stirring the pot by making a big deal (or so the narrative goes) over pronoun usage.  Someone should lose their job for using the wrong pronoun!  The stuff is Fox-News-Ready.

It gets even crazier, with politicians claiming that "Purple-haired nose-ring-wearing Lesbian grade-school teachers" are "grooming" their students by allowing them to "identify" as "furries" and providing a litter box in the classroom.  Of course, this never happened, but that doesn't stop the far-Right from jerking off to it.

Modern Conservative thought, I am told, is to invent crazy ridiculous scenarios in their head and then get really mad at them and then legislate against them.  Whether it is "Critical Race Theory" or "Don't Say Gay" the bottom line is the same:  These things are simply not happening.  No one is teaching "Critical Race Theory" in math textbooks, and no one is encouraging little Johnny to change genders in Kindergarten, except in the fantasy mind of Tucker Carlson et al.

But never fear, legislators will outlaw these things, even if they don't exist.  Meanwhile, the plebes are distracted from what is really going on in the world.  The looting of the treasury, dramatic wealth inequality, and of course, our messed-up health care system.  Those are trivial matters.  What is critically important is testosterone levels!

This also plays into the "Great Replacement" conspiracy theory.  Wealthy, affluent, white people are not having kids like they used to.  Back in the 1900's, a wealthy family would have a dozen kids.  Of course, half of them would die of childhood illnesses, and a wealthy man might go through three wives, two of which would die in childbirth. By the 1960's an affluent middle-class family might have four or five kids.  By the 1990's, it was two - if that.  Today, upper-class folks are waiting longer and longer to have kids and having fewer of them - if they have them at all.  In part, it is because of economics.  In part, it is because many upper-class people are in two-income households. In part, it is because thinking people realize the world is over-populated as it is.

But never fear, the utter white trash that comprises "White Supremacists" (the worst examples of the white race) are having litters of flat-faced inbred babies with little hope for a decent education, upbringing, or job prospects.  Hey, maybe that is the real problem right there!  It isn't we have too many brown people, but too much Honey Boo-Boo.

You see how this works. Real manly-men are ignorant, violent, and abusive. They have litters of children without thinking of consequences.  Thinking things through or being considerate of others is just sissy-talk!  We need to knock some heads together and get things done!

It is an appealing message - fascism.  And it worked for Hitler as well.  He promoted the image of the blond-haired, blue-eyed ubermensch who was part of the "master race" and would reproduce prolifically as part of his duty to the State.  And attractive-yet-sturdy Rheinmaidens would birth the new world order.  Or something like that.

The whole thing sounds ridiculous and weird - to most of us.  But to those embedded in the Culture of Belligerence, it all makes perfect sense.  Unfortunately, the folks flogging these issues are promoting and fanning the flames of belligerence and violence with this dog-whistle posturing. They claim shocked innocence when one of their wind-up soldiers actually acts out their fascist fantasies.  "Who, me?" Mr. Carlson proclaims, "I dindonuffin!"

But it is an old, old game.  You pander to the dumbest and most belligerent part of the population (and the mentally unhinged as well) and give them ideas.  Ideas such as "Democrats are out to destroy our country!" or "Minorities and Immigrants are taking over!"  Then you sit back and claim innocence when attacks on minorities and immigrants skyrocket and people try to intimidate voters or even overturn elections.

It it wasn't so sad, it would be funny.