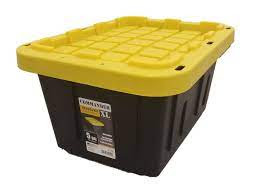 For some reason, these became wildly popular in the last year or so.

Over the years, we have bought or found quite a few plastic totes.  Our first set was from Rubbermaid, and had blowmolded lids.  We took them camping with us, and put our sleeping bags in one of the bigger totes.  We still have two of those totes - and the sleeping bags, which are now over 30 years old.  Funny thing, you don't have to "buy new" every few years, although there are many other things in my life I foolishly discarded and then bought back again.  There is a fine line between hoarding and being wasteful.  Overall, I have to say we've stayed on the side of light and goodness.

I suppose we could have kept the tent we bought 30+ years ago with the sleeping bag, but once we bought an RV, it was kind of pointless to keep it, when we could get a few bucks for it at a garage sale.  We used the sleeping bags over the years (the rectangular kind that you can zip together to make one king-sized bag for two).  The tent would have just dry-rotted in the attic.

While rehabbing the condo, we would go to Tippy's Taco for theiir $1.25 tacos and walk by the trash pile for the townhouses nearby.  Someone was throwing away totes!  By the time we got back, there was only one left - almost the size of a coffin.  We grabbed it and sanitized it (it was already pretty clean) and used it as a coffee table for the 11 days we were there and then packed it with "stuff" to take home.

It was a yellow-topped tote like shown above, only larger.  These appeared out of nowhere about two years ago, and yes, we bought three as the back of the pickup truck is not waterproof (and never are, no matter whether you have a tonneau cover or a "cap" on the back - they leak).  I noticed lately they have red tops on them.  No doubt some place in China is cranking these out.  And every time I go to the "big box" store, someone is piling three or four of these in their cart.  They are popular.

Hence the first law of plastic totes:  Never buy a huge plastic tote, unless you only plan on putting pillows and blankets in it.   The things are so huge that if you fill them with ordinary objects, they become too heavy to move.  I have one such tote - the size of a child's coffin - filled with photos and "mementos" that are too precious to throw away (Not!) and it never moves from its place in the garage as it simply weighs too much!

The second law of plastic totes is this: Do you really need one?  Is the stuff you are putting in the tote worth saving?  Once it is in the tote, it is "out of sight, out of mind" and you forget you own it.  As I have noted before, if you can't remember where you put something - or forgot you owned it - you might as well not have it.  More than once I have opened a tote after many months or even years and said, "I forgot I had that!" or "So THAT'S where that's been!"

Totes can be an entry-level drug to full-blown hoarding disorder.  I noted before a friend who has this problem - one house, two condos, and two storage lockers filled with carefully curated totes, each labeled with its contents, each containing stuff they will never need or use at age 70 and beyond.   At least they are not living in a pile of filth, but this is how it starts.   Dead cat in the freezer, coming up!

So you have to be careful with totes - they are alluring as a siren's song, and can lead you down the path to keeping "stuff" you really don't need or want.  If you go the tote route, you have to go through them over time and toss things away.  If you find "stuff" in a tote that you haven't put your hands on in two years or more, chances are you don't need it.  Totes are dangerous - and not just as a potential suffocation hazard for small children, either.

The third law of totes is to not pay much for them.  We got this one for free from the trash, but others we have been given for free or were bought for pennies-on-the-dollar at garage sales.  Plastic totes are one of those things that you may pay a lot for (the one above is about $13 plus tax), but is immediately worth almost nothing in resale value - as evidenced by the fact they appear in trash bins and garage sales for a dollar or two.

But the real danger is the fact that totes accumulate - and accumulate junk.

It is worth noting that most of these totes are not water-tight or air-tight or bug-proof.  If you put your precious woolens in a tote, you might want to throw in a box of dollar-tree mothballs as well.

What was refreshing about rehabbing the condo was that we went there in the hamster with a suitcase and sleeping bags and a few tools and paintbrushes.  For two weeks, the only possessions we had to worry about was what we could pack into our car.  It was liberating.

We get back and it's like, "What the heck is all this stuff we own?" and you start to re-think things.  Sometimes, less is more.  And after cleaning up someone else's mess, you start to look around your own home and recoil in horror as the same sort of things.  How did the laundry room sink get that filthy?