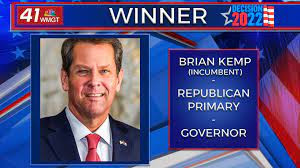 Tuesday was primary election day in Georgia and we voted - in the Republican primary.  "Wait," you say, "Aren't you a Democrat?"  Well, no, actually we are more independents but lean that way.  But in Georgia, we have an open primary system, which I wrote about before, twice.

It took us several years to figure out that voting in the Democratic primary was kind of stupid.  Most candidates are running unopposed or have huge leads against no-name opponents.  And in Georgia, at least until recent times, the Republican candidate always won.   So if you wanted to make a real choice with your vote, it wasn't in the Democratic primary, or indeed, even in the general election, but in the GOP primary.  Of course, that may be changing, now that we have two Democratic Senators.  But in terms of primary voting, the Democratic ticket is largely unopposed.

The pundits are at it again - this time in an article today pontificating that "Trumpism isn't dead" even if Governor Kemp and Secretary of State Raffensperger won the nomination of their party.  These are the guys who refused to go along with Trump's "Big Lie" and overturn the election results.

By the way, our voting machines here in Georgia are very secure.   To vote you have to present your ID, which is scanned in on a first computer to make sure you are in the right precinct and entitled to vote.  Then, you are given a card to authorize the voting machine.  The machines present your voting choices on a screen, and when you are satisfied with your selections, it prints out your choices, which you can then read on a piece of paper.  These are then scanned into another machine and the paper is saved in a locked and sealed box that cannot be opened by local poll workers.  So not only is there an electronic count, but a paper ballot backup for manual recounts (or optical recounts of the paper ballots).  It is about as secure as you can get.  And no, I don't want to hear any conspiracy theories about this.

Anyway, Georgians like the Governor and Secretary of State, in part because they stood up to Trump.  But in most closed primaries, only the rabid extremists of every party vote, which is how you end up with candidates like Ms. AOC or Laruen Bobert.  Of course, even in an open primary, you can end up with candidates like "Our Miss Margie" Green, but in the inbred hills of far Northwestern Georgia, anything is possible, particularly when the opposition candidate quits the race.

In the general election, everyone votes - Republicans, Democrats, and the largest group - Independents.  So in a situation where the nomination is determined by the fringe, it can often come back to haunt you in the general election - which is why these fringe candidates try to sound "normal" in the run-up to the general election.  "That Mr. Hitler isn't so bad!  I hear one of his grandparent's was actually Jewish!"

You know the routine.

So now the governor's race comes down to Kemp, who has shown independence from Trump, and Stacey Abrams, who might win, but let's face it - has no real experience in government other than losing the last time around.  But she may get out the black vote.

Speaking of which, the GOP has an issue on its hand. Georgia - particularly Atlanta - has a huge black population, as well as a large population of liberal whites.   So to win the Senate, they have a problem - Ralph Warnock is black and the GOP "needs a black" to go up against him.  If the Senate race was down to Warnock versus some sweaty, crew-cut white guy with rolls of red flesh over his too-tight collar, the result would be predetermined - Warnock would win.  So what to do?

Find a Stooge.  And they found one, in a brain-injury football player with a famous name and a history of wife-beating and stalking.  I'm not saying he's dumb as a rock, only that today, when asked about Trump's "election fraud" claims, he replied, "Trump never said that!".

It is kind of insulting and condescending, if you think about it.  You know how it went down in some GOP think-tank.  "We need a [black].  They'll vote for one of their own!  Doesn't matter who - some sports star or a church deacon.  Oh, wait, the Dems already have the latter.  Let's go with sports star!  They're dumb enough to vote for that, regardless of his background and experience!"

And it may very well work, which is the sad part.  It isn't that the vast majority of black voters will fall for this gag, only that they need just a small portion to be swayed to win.   Combine that with new voter restrictions and of course, voter suppression tactics (sending out letters making vague threats about legal repercussions if you vote "illegally" or have a criminal record or some nonsense) and it may be enough to swing the election.  Democrats won in Georgia last time around - but by slim margins.  It helped that the election was the day after the insurrection.  We can't count on Trump being so cooperative this time around.

Open primaries offer another opportunity for the independent voter - the chance to be a spoiler.  It is the argument used by opponents of open primaries.  The idea is, as an independent or Democrat, you vote for the most whacked-out fringe candidate possible, knowing the voters in the fall will reject that candidate and vote Democratic instead.  It is a neat theory, it falls apart on two grounds.

First, the whacked-out fringe candidates now represent the bulk of the GOP these days.   I looked at the websites of all the GOP candidates and they all paid lip-service to "voter fraud" and "build the wall" and "stop the steal" and "Biden is a Communist" and other nonsense.  There were no middle-of-the-road moderate candidates.  Our current governor was about as close to that as you can get, and even he pays lip service to conspiracy theories.

Second, it has never been shown to work.  You would have to organize hundreds of thousands of voters to intentionally vote for a candidate they don't like, and then you have to hope it works - and that another candidate you don't like but is more electable, actually wins.  And even if you got it to work out a the primary level, suppose the nut-job wins in the fall?  That is how we ended up with Trump, I think - a lot of "Bernie Bros" voted for Trump out of spite.  Because no one ever liked little Donnie, not even in grade-school.  He had cooties.

So why do some States have closed primaries and others open ones?  Well, in many cases, the extremists take over the party and push for closed primaries, as it insures that only extremists will be nominated.  In other cases, more pragmatic politicians realize that no one will get elected from their party if only extremists are on the ballot.  And I think that is the mathematics being done in Georgia and other "open primary" States.  People from "up North" may think Georgia is part of the "Deep South" and harbor images from the civil rights era, but in reality, it is a somewhat progressive State - with a large metropolitan area outvoting the more regressive rural ones.  It is similar to Virginia and New York in that regard - both with huge metropolitan areas that out-vote the rest of the State (or Commonwealth) whose residents may have other ideas.  Yes, Virginia, there are Republicans in New York State - and they even win elections.

The fall election will be more interesting.  But even if the GOP makes gains, I am not sure it is an endorsement of Trump or Trumpism, but just a normal reaction in a mid-term election. If the GOP gains control of either house, expect "hearings" and "investigations" to begin, as that is the new norm.  And expect the January 6th committee to be disbanded. What took them so long anyway?  Maybe Americans are finally getting tired of these "great revelations!" that are always "next week" or whenever.  Doesn't matter if it is on the Left or Right, it seems these "investigations" and hearings result in nothing actually happening, other than a chance to create sound-bites for the news cycle.