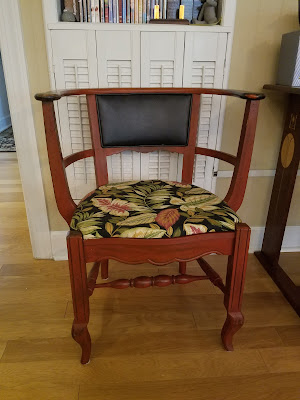 If you wait long enough, someone will throw away exactly what you are looking for!

One part of the condo rehab was how we "found" stuff on trash day.  If we stayed there another week, no doubt we could have furnished the whole condo.  Someone, for example, threw away two sturdy kitchen chairs (or dining room chairs) that were sort of a colonial motif.  They were built solidly, clean, and in good condition.  It is a shame there wasn't four of them.  Of course, Mark sanitized them with wipes before we brought them into the condo.  When we left, they went out on trash day for someone else to nab.

The key to trash-picking is to go to nice neighborhoods on the night before trash day.  Chances are, you will see others doing the same.  When we lived in Northern Virginia, there was a fellow with an old pickup truck who would cruise our street on the night before trash day, looking for decent furniture or recyclable metals.   You'd be surprised what people throw away sometime.

We got these four "Chinese" style chairs this way - from a dumpster at the Arts Association.  Someone donated them and they didn't need them anymore, so the President of the Arts Association was tossing them.  We used them for years, as-is, but the reed seating was wearing out.  The arms are a bit patina'ed but Mark likes them that way (we did find a matching paint if we wanted to "restore" them).  Anyway, we decided to upholster them and found a remnant of fabric at Jo-Anne's fabrics, along with some foam.  A little more dumpster diving at a construction site produced four sheets of plywood, about 2' by 2', which could be cut to fit the shape of the reed frame.  A little cutting, a little sanding, and a little stapling, and we're back in business, with four occasional chairs.

Our dining room chairs we actually paid for - at a junk shop.  We have an old church pew on one side of a table that came from the mansion Mark's Dad bought after the war to convert to a rest home (which he later sold when the State of New York declared it a fire trap - some rich guy owns it now).  Anyway, these chairs appear to be oak or some other solid wood, perhaps from a restaurant or a school.  But they were stained a dirty grey color.  A friend suggested painting them - gold.   We tried one color, but it was too bright - the color of my Mother's 1973 Vega.  So we tried again with a slightly darker color that turned out more like School Bus Yellow.  We used a spray gun, and it took about two coats.  There are eight of these chairs! 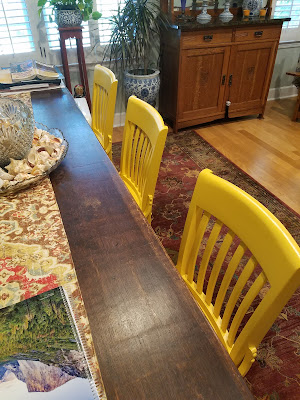 I am not sure about the color, but we do have a lot of "brown furniture" which is not very fashionable down by the shore.   But it's starting to grow on me.

The point is, you can make things from nothing, or just find things that others are tossing away and make them into something - for not a lot of money.  The television tells us that we have to whip out a credit card every time we need something - and conveniently, they tell us what we need and how much it will cost.

Getting off the consumerist bandwagon doesn't mean living like a Monk, only that you can live with more for a lot less....