There Ain't No Such Thing As A Free Lunch! 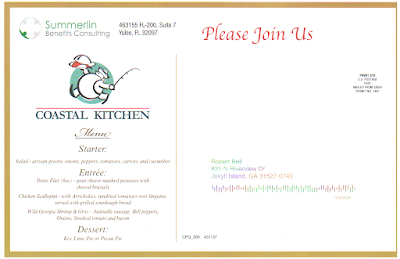 When someone offers you a free lunch, watch out!

Living on Retirement Island, I get these postcards in the mail about once a month.  If I went to all these "invitations" I would be even fatter than I already am.  What is up with these offers of free meals?  Well, like anything else, they are trying to sell something, and in this case, it is insurance or more precisely, an annuity.

Are annuities a bad deal?  Not necessarily - but not necessarily a good one.  I covered annuities before and they come in all shapes and sizes and flavors as well as good, bad, and indifferent.  There are open-ended or life annuities which pay out a fixed sum every year for life, or a closed-end or term annuity that pays out for only so many years.  If you get an open-ended one, make sure you are aware whose "life" it is based on.  Many a spouse has been chagrined to find out that their husband's hefty annuity terminated upon his death - leaving them with nothing.

But the basic problem with annuities is that for every dollar paid out, there has to be more than a dollar coming in - basic math. These companies are not charities - they do not operate as a public service.  They hope to make money - a lot of it - off your money.  It is like any other investment scheme, although a little more opaque than most, as  you really have to dig to figure out where it is your money is going and what it is "invested" in.

And is your money safe? Suppose the insurance company underwriting the policy goes bankrupt?  Where does that leave you?  Most annuities and insurance policies - in fact, I think all of them - are not FDIC insured.  I've read that the "Secretary of State" in some States insures these policies, but I would guess that would depend on what State the company is in - or you, for that matter.

Of course, there is risk in any investment. Buy something "solid" like GM stock - what could possibly go wrong?  It has been a "blue chip" stock for nearly a century!  Then they went bankrupt.  So  you can lose money on almost anything.   I am not "anti-annuity" only that I am not sure it is a swell idea to put all of your money into one investment, as if that one investment goes sour, you might be out of luck. 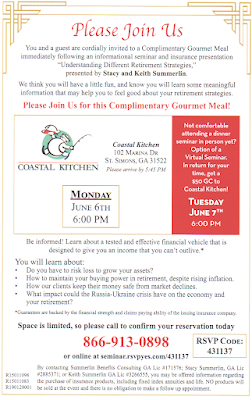 What are they selling?  Annuities!

For me, the point is moot.  Our "cash" is tied up in IRA accounts, and if I wanted to withdraw a hundred grand to buy an annuity, well, I'd have to pay taxes on that - and it would not only kick me into a higher tax bracket, it would also wipe out a $20,000 annual Obamacare subsidy.  So I would have to take out $140,000 to cover that and the State and Federal income taxes.  Maybe if I sold the house and had a pile of after-tax money laying around, I could swing that.  But even then, I could think of better places to put the cash.

What is telling, though, is the way it is being sold.  You can spot a bad deal at 100 paces just by the way it is presented.  If this was such a hot deal, we'd be staying up all night, lined up at the door to their office, in sleeping bags, waiting for them to open - like people in line for rock concert tickets - so we could buy an annuity.  But instead, they have to offer a "free lunch" to get us to attend and listen to their spiel.  It has all the charm of a timeshare presentation.

As a 2022 Covid twist, you can attend the "online" seminar and get a $50 gift card to the restaurant.  I signed up for this, but there was no indication of how to "attend" this seminar - no link provided.  Is it a Zoom meeting or what?  Live or pre-recorded?  I guess I'll have to wait and see.  I'm betting I never see the $50 gift card.

I hate to say it, but these types of promotions also cheapen the reputation of the restaurant involved.  Halyards, another SSI restaurant, also hosts these sort of events.  I was never too impressed with that restaurant chain either.  The restaurant hosting this event does have a banquet or event room, but I could not see how many folks it held.  Even if you assume there are only 50 people or so, and each meal costs them $25 or so, that's $1250 the promoters spent, just to get "leads".   You can imagine how this works - they likely get a 5% commission on each "sale" - so if they sell even one annuity for $100,000 they come out ahead.  If they do two or three or more, well, they make a nice sum for a day's work.

So why do they put on these seminars?  They cost a lot of money and there is no guarantee they'll get a commission!  Well, the reason is, they work.  Once you get people isolated like that, and hold their attention for several hours (and you know the food will be withheld until 8:00PM to get everyone's blood sugar nice and low) they start to go along with what you are saying.  Put a "shill" in the audience to say things like, "Gee, these timeshares annuities are a good deal! My wife and I are buying two!" and others will go along with it.  Evangelical churches work the same way.

How do you avoid this trap?  Just don't go.  Yes, I know, it is appealing to "steal the cheese" and go to a timeshare seminar and get a "free weekend vacation!" and a "free barbecue grill!" or something along those lines.  It is tempting to go to a casino and try to scarf some free drinks, too.  Odds are, you won't get any (I tried - you need to drop at least $100 at blackjack just to get one watered-down drink.  They don't give free drinks to non-players!).  Same for these sort of deals.  Chances are, at best you are bored for two or three hours and maybe get a somewhat satisfactory meal.  But of course, it would be a much nicer meal if someone wasn't droning on about annuities while you were eating.

Just walk away from things like this.  There Ain't No Such Thing As A Free Lunch!  TANSTAAFL!   When someone dangles out "free" in front of you, odds are, they have one hand on your wallet.  They hope (and know) you will salivate like Pavlov's dog.

UPDATE:  I did not attend the dinner and was busy the day this did the live video broadcast.  But they e-mails me and told me I could watch a recorded version, so I did (while doing other things, of course).  It was a pitch for annuities, as I suspected.  The gag was that these annuities were guaranteed to never decrease in value (you could always get your money back - provided the company isn't bankrupt) but you may make 10% or 20% or more over time or whatever.  You could not withdraw all of your money at any given time, but could take out 10% every year - so over 10 years, you could extract what you put in.

A friend of mine signed up for a similar annuity - they paid in a hundred grand and it grows in value and if they become incapacitated, it pays out in the form of extended care (nursing home, etc.).  If they don't use the policy, it pays back what they put in (with no interest).  And interesting angle to be sure.

Would I buy one?  Well, it fails two tests - the first being, The more complicated you can make any financial transaction, the easier it is to snooker the consumer.   This is a complicated contract between you and the insurance company, who you hope won't go bankrupt.  It is hard, if not impossible, for an ordinary consumer to understand all the ins and outs of such contracts, which is why they use the hard-sell.

Second, these companies aren't working for free.  The presenter tried to intimate that they wanted to "help" people and weren't making money at this, but for sure they get a commission on each sale - they are not a charity.  And neither is the insurance company, who makes a profit off your investment as well.

It may be simpler and easier to just invest your money and move on.  If you are worried about variations in the market or losing money, maybe an FDIC insured CD is a better idea - or a government bond.

But they did send me a $50 gift card as promised!  So there's that!