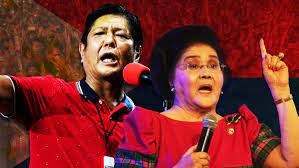 Revolutions are not started by the poor, but by the middle-class.

There is an election going on in the Philippines right now and of course, no one really cares much about that.  It is not that we hate the Filipinos or anything, only that the country is largely irrelevant to Western powers.  We invaded the Philippines during the Spanish-American war and then promised the Filipinos that we would support their independence movement if they helped us out.  Then we changed our minds and slaughtered them by the thousands - proving that an insurgency can be broken, if you are willing to become a butcher.  Apparently that is Putin's plan as well.

We wanted the Philippines as a strategic naval base and coaling port.  Back in the days of the Great White Fleet, we needed refueling stops across the globe, as the coal-fired ships of the fleet were hungry for fuel.  Eventually we gave up our naval base there - it was largely irrelevant at that point.  But we still supported a petty dictator who was looting the treasury to line his own pockets.

All that changed while I was in college.  There was a revolution - "People Power!" and Marcos was booted out of office.  A friend of mine who was attending Syracuse at the time was all excited about this revolution in his home country.  I asked him about his life there and he told me that his family lived in a luxury high-rise in Manila.  "What does your Dad do for a living there?" I asked.  "He owns a village," my friend replied.

Owns a village?  I mention this to other Filipino friends and they nod their heads.  It's a thing, apparently.  So I asked my friend where the village was and what it was like and he said, "Oh, you don't go to those places!" as if somehow their source of income was beneath them.

So I found it ironic that he was championing "People Power!" when he was part of the ruling class that was being overthrown.   I am not taking a piss on him here, just reporting the facts.  He has since become an academic and lives in the States now.   So I don't think he is exploiting the masses or anything.

But his reaction illustrated the fatal mistake Marcos made - he pissed off the middle-class.  The ruling class has little to fear from the very poor - they are living hardscrabble lives and have little education.  They don't understand or trust revolution, and have great respect for authority.   They spend their days struggling to exist and have no time for pie-in-the-sky revolutions.

But the middle-class?  They have the education, the time, and the money to foment revolution.  And historically this has been so.

So today they are having an election and it looks like "Bong-Bong" Marcos will win.  He has done a good job of creating a disinformation campaign to wipe clean the stains of his parent's regime.  No more stories about Imelda's vast collection of shoes or Ferdinand's stashing of money in Swiss bank accounts.   Of course, the middle-class remembers all these things, but the poor folks living in the villages want to elevate a king above themselves.  Maybe all they remember - vaguely - is that during the Marcos era, life was pretty good and their king was a God.

It's not hard to convince them that "Bong-Bong" will Make The Philippines Great Again - and the masses will feel pride in the expensive gowns the first lady will wear and the be-medaled uniforms El Presidente will sport.  Who knows?  Maybe they will have "Victory Parades" as well - the type that Trump so desperately wanted, not to assuage his own ego, but because he knew the red-hats would eat that shit up.  America, Fuck-Yea!

Maybe that is where Trump went wrong.  His half-assed attempt at a coup turned off a lot of the middle-class voters who were willing to "go along" with his agenda, provided it provided them with some table scraps - a tax cut here, a Supreme Court justice there.  And maybe next time around, the coup attempt will be fully-assed.  The election boards, governors, and secretaries of State in many States have been ousted (or will be) and replaced with Trump loyalists - who will certify the election for Trump, no matter who actually wins.

But Bong-Bong and The Donald have to remember one thing:  Don't piss-off the middle class!